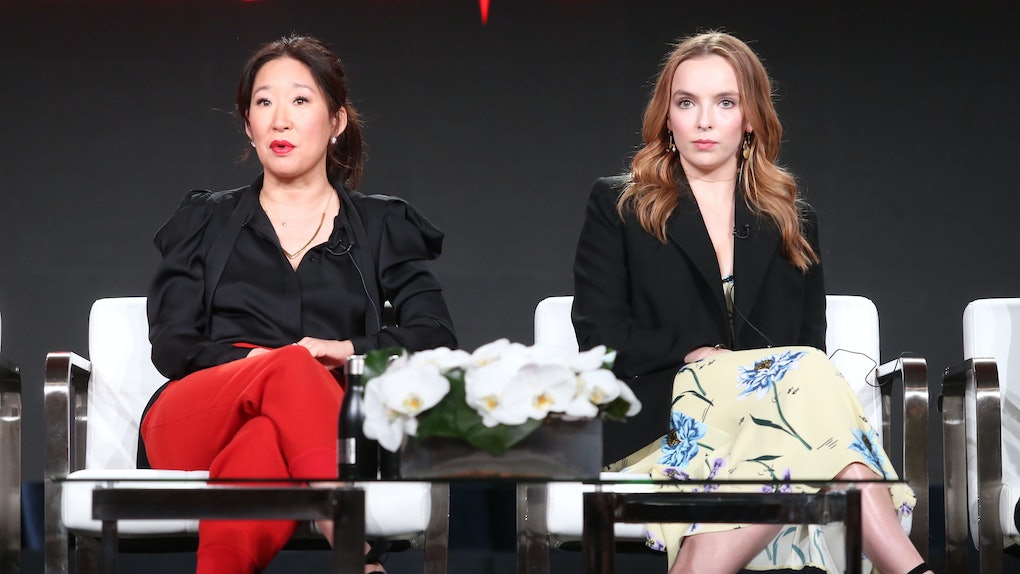 Warning: This post contains spoilers for Killing Eve Season 1. When we last saw Killing Eve's Eve Pollastri and Villanelle in the Season 1 finale of the BBC America series, Eve had just stabbed Villanelle, and Villanelle had attempted to shoot Eve before disappearing. So, it was not the friendliest of departures between the show's two leading ladies, and fans were left hanging off the steepest of cliffs wondering what happens next. Well luckily, in anticipation of the sophomore season of the series, there are some newly released details about Killing Eve Season 2 that will make fans so excited.

Entertainment Weekly released eight new still images, giving fans a first look at what's to come in Killing Eve's new season. Right off the bat, both Eve and Villanelle are alive and (for the most part) well in the series of photos, so we know that the characters at least survive the bloodbath of the Season 1 finale long enough to make it to Season 2. But given the dark twists this murderous mystery show took in its first season (RIP Bill!), there are no guarantees for any characters in seasons to come. The only thing that is guaranteed is that this perpetual cat and mouse chase will once again be full of surprises.

At the beginning of the second season, fans will be find Eve, played by Sandra Oh, dealing with the aftermath of her violent act. Executive producer and Season 2 head writer Emerald Fennell said to EW, "Eve has done something, which may have changed her forever, that will have repercussions with every relationship in her life." An international spy stabbing her prime serial murder suspect is the kind of thing that would have an impact on a person, so it makes sense that Eve will be grappling with her actions come Season 2. Fennell also said, "It's a ripple effect that both of them have experienced."

In one of the first look images EW released, Villanelle stands under an overpass and nurses her fresh stab wound with a bottle of vodka. So this means Villanelle definitely survives her stabbing, and Season 2 will pick up the action right where Season 1 left off. It also means that Villanelle will continue with her oddly lethal, take-no-prisoners attitude; I mean who else but a cold-blooded killer like Villanelle could nurse their own stab wound with only a bottle of vodka?

Jodie Comer, who plays Villanelle, told EW viewers can expect her character to be even more heightened in Season 2. She said, "I don’t want to take away the pleasure of surprise, so all I will say is you can expect more, more, more from Villanelle.” Sounds like Villanelle will not be stopping her murder spree any time soon, which only means more for Eve to pursue – and escape from. Oh told EW that she was especially struck by the way "Eve and Villanelle's relationship progresses and deepens" in Season 2. Theirs is one of the most captivating relationships on television, so one can only imagine the depths it goes to in the new episodes.

The whole first season of Killing Eve is now available to stream on Hulu, so you can watch (or re-watch) all the best moments from Season 1 ahead of Season 2's spring 2019 premiere.

More like this
'The Crown' Season 5: Netflix Release Date, Cast, Plot, & More Details
By Ani Bundel
These 'The Nevers' Theories About That Flying Ship Are Absolutely Bonkers
By Ani Bundel
These Tweets About Meredith & Derek's 'Grey's Anatomy' Beach Wedding Are Too Much
By Abby Monteil
Stay up to date