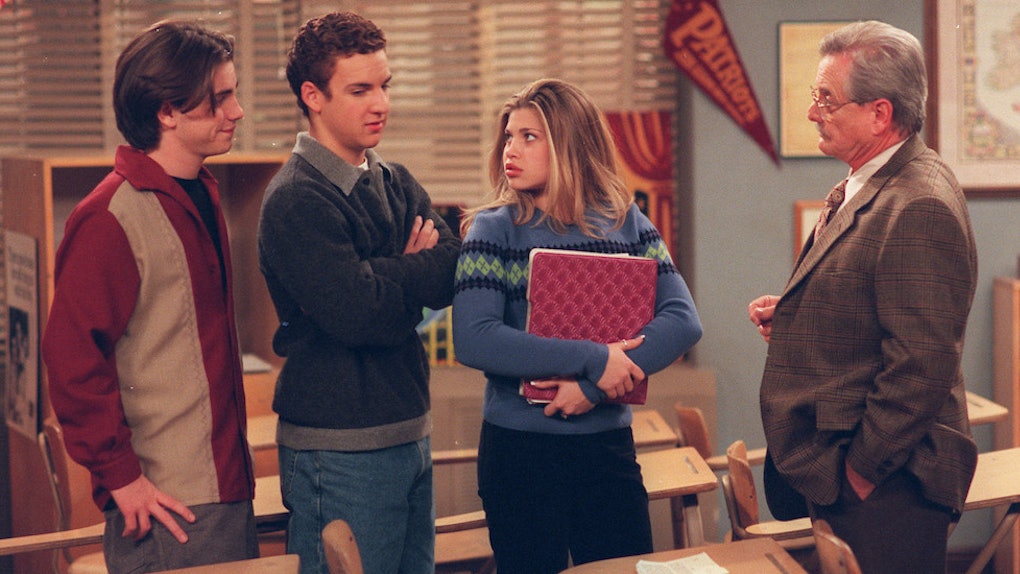 It is wild to think that it has been 18 years since we saw Mr. Feeny say goodbye to Cory Matthews, Topanga Lawrence, and Shawn Hunter in the Boy Meets World finale. The words "class dismissed" still give me goosebumps when I remember those last few moments. But the Boy Meets World cast is not really gone — they reunited over the weekend to reminisce on the '90s coming-of-age classic... and wound up pointing out some parts of the show that weren't so perfect. These Boy Meets World plot holes were called out by the cast at their reunion this weekend, and they will seriously affect your next Boy Meets World re-watch.

The Wizard World convention in Chicago on Aug. 25 and 26 brought together everyone's favorite '90s dream team — Ben Savage, Danielle Fishel, Rider Strong, and Will Friedle — to dish about Boy Meets World. Of course, there were a lot of fond memories and warm moments, they even recreated one of their iconic cast photos. But after a while, the cast also began bringing up all the glaring plot holes in the show that have always bugged them. Fans of the show may or may not have noticed these, but the Boy Meets World actors sure remember some perplexing choices.

And it is apparently confusing for the cast as well. Will Friedle wanted to get one thing straight before the yard debate began: "Well, first of all, can we all agree that the architecture [of the house] makes no sense?" Rider Strong brought up the Matthews' garage that seems to only appear when needed to underline Friedle's point. In the end, Danielle Fisher argued that the yard is in the back, with Friedle saying it was on the side of the house... but it seemed clear that the mystery of the yard will still plague fans.

The yard debate led into another big inconsistency in Boy Meets World: the ever-changing siblings. It is already very well-known among fans that Cory and Eric Matthews' younger sister Morgan was recast in the middle of the series, but that was really only one of the many sibling shake-ups.

Will Friedle pointed out that the Matthews' baby brother Joshua went from a newborn to a toddler in a matter of episodes, and Danielle Fishel mourned the loss of Topanga's sister Nebula, who only appeared in one episode before being completely forgotten... not to mention her parents being recast multiple times. Rider Strong also pointed out that his character Shawn had multiple brothers and sisters who were introduced in early episodes and then totally cast off.