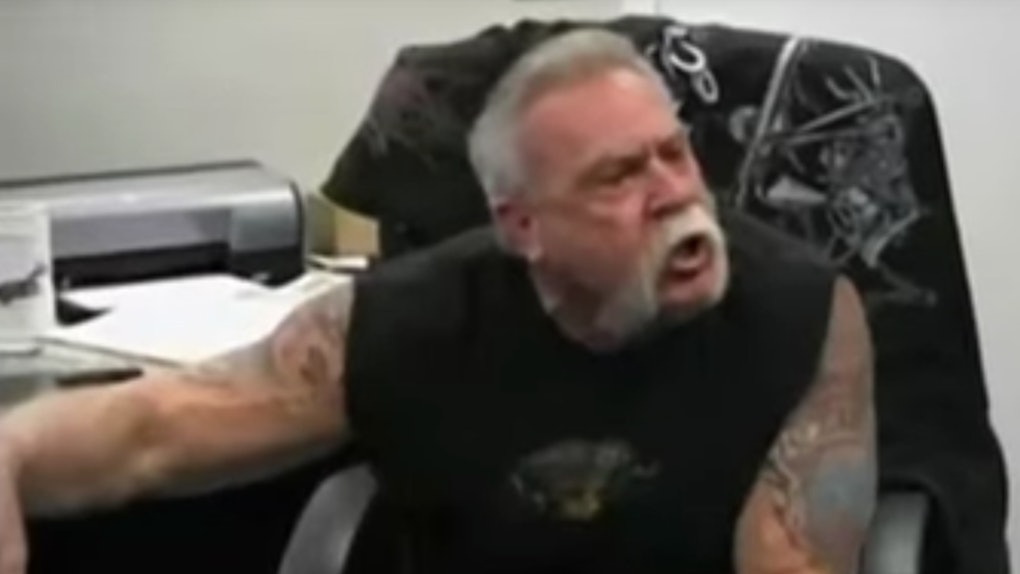 I hate (and also love) to say it, but at this point, the backbone of American pop culture is basically just comprised of memes. If you think about it, most of the viral images manage to provide a tremendous amount of social commentary and humor. So if you really want to know what's going in the news, just scroll through memes all day. And if you haven't already gotten the chance to see the American Chopper memes, log onto Twitter. They're literally everywhere right now, and TBH, they're so funny.

There's a pretty good chance you've already seen the American Chopper meme circulating online this week. It's basically just a photo montage of two burly men from the show (Paul Teutul Sr. and Paul Teutul Jr.) having an argument that drastically escalates when one of them picks up a chair.

Unsurprisingly, the internet has reimagined a variety of situations that could be happening in the photos of the arguing men. Some have superimposed text suggesting that they're fighting over Star Wars, while others have imagined it as an argument between a pet owner and their cat. Some have even recreated the meme to represent that super awkward moment when you mess up at self-checkout. There are so many fantastic scenarios that people have come up with, and for the sake of being culturally in-the-know, they're most definitely worth checking out.

While some things in this world are better left unexplained, curiosity took over while I was scrolling through these memes. Therefore, I looked into what's actually going on in the montage. According to The Guardian, the men in the memes are a father and son duo from American Chopper: Paul Teutul Sr. and Paul Teutul Jr. They were the stars of the reality TV show in the '00s which focused on their family chopper-style motorbike manufacturing business. Even though that might not sound super interesting, their consistent arguments made things pretty exciting.

The meme specifically comes from an episode of the show which aired back in 2009. In the episode, Teutul Sr. is frustrated with his son, Teutul Jr., who is constantly late for work. Things get heated, and Teutul Jr. throws a chair across the room before walking out of his dad's office. Spoiler alert: Teutul Jr. ends up getting fired in the end. I guess being late and throwing chairs isn't highly favorable in the workplace. What a shocker.

Also, I'm not entirely sure if watching said American Chopper clip drastically changed my life or anything, but there's no denying that it's highly entertaining. The way the two men handle the conflict is nothing short of amusing, and it'll definitely give you a cherished flashback to early '00s reality television. Before you decide to watch it, just make sure you're prepared to witness some muscle tees, intense music, bleeped-out profanities, as well as an abundance of interesting facial hair. So yeah, if that doesn't sound even mildly entertaining to you, I have no idea what will.

Memes truly make the world go round, so keeping up with them is vital as a member of American society. And since American Chopper memes are spreading like wildfire in the Twitter world right now, finding as many of them as possible is extremely important (and also highly entertaining). And even though it isn't always necessary to know what's actually happening in the photo behind a meme, it can definitely make things a little more interesting... especially when the meme involves a reality show from the early '00s. Let's be honest: Memes are seriously unbeatable.