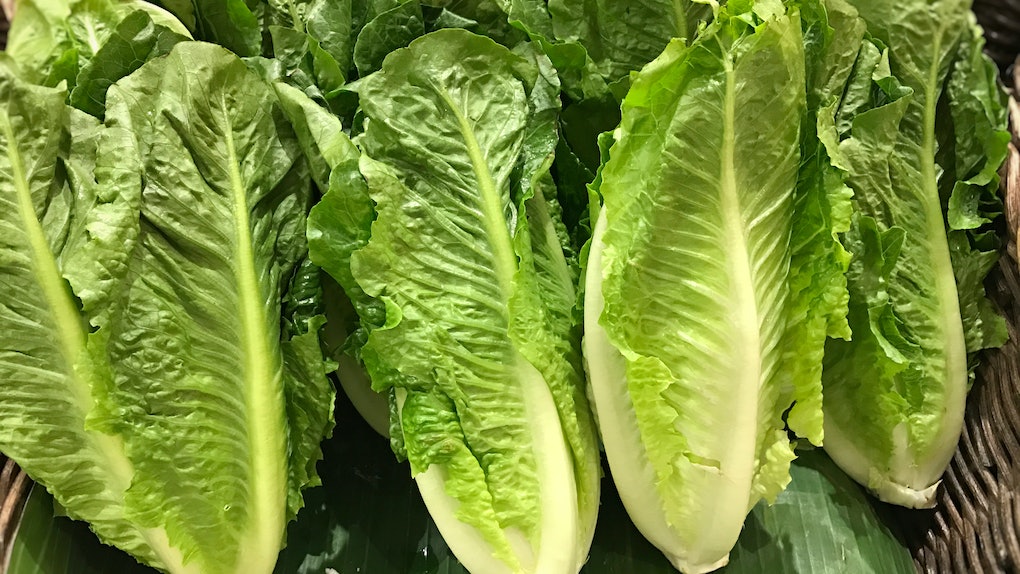 On Friday, Nov. 22, the Center for Disease Control revealed that it was conducting a multi-state recall of romaine lettuce amidst concerns of contamination and numerous illnesses. According to the release, 40 people have already been impacted by the E. coli outbreak in romaine lettuce, so you're definitely going to want to double check your labels before you make your next salad. Here's what to know about the latest E. coli outbreak, which has already been reported in 16 different states and led to numerous hospitalizations.

One day before issuing its widespread alert for romaine lettuce sourced from Salinas, California, the USDA recalled a handful of select lettuce products. Now, it appears that the case is more serious than initially reported, and the CDC issued a safety alert on Nov. 22 pertaining to all romaine lettuce sourced from Salinas. According to the alert, 28 individuals out of the 40 reported cases of E. coli contamination have been hospitalized, although no deaths have been reported.

When you're doing your grocery shopping, you'll want to avoid any kind of romaine lettuce that was harvested in Salinas, such as "whole heads of romaine, hearts of romaine, and packages of precut lettuce and salad mixes which contain romaine, including baby romaine, spring mix, and Caesar salad." The easiest thing to do is to check out the label or the packaging, where it'll usually tell you where the lettuce originated from. If it reads "Salinas" or there isn't a growing region that's noted, you're better off not buying the product.

When it comes to deciding whether or not you should be tossing the romaine lettuce you have at home, you'll first want to check the list of recalled products that the U.S. Department of Agriculture announced on Nov. 21 from Missa Bay. The recall includes romaine lettuce produced from Oct. 14 through Oct. 16 with the number "EST. 18502B" printed within the USDA inspection label. According to the release, residents in the following states all had access to the contaminated products: Alabama, Connecticut, Florida, Georgia, Illinois, Indiana, Louisiana, Maine, Maryland, Massachusetts, Michigan, Minnesota, Mississippi, Missouri, New Jersey, New York, North Carolina, Ohio, Pennsylvania, South Carolina, Virginia, and Wisconsin.

In addition to these select products, the CDC reported that you'll also want to get rid of any romaine lettuce that you find in your fridge that has "Salinas" on the label. Again, if there isn't a location printed on the packaging, you're better off throwing it away and being safe rather than sorry.

Unfortunately, there's no way of telling for sure where the romaine lettuce is sourced when you're eating out at a restaurant, so I'd recommend playing it safe and not ordering any dishes with the vegetable until consumers are notified that we're all in the clear. Again, 40 people have already reportedly gotten sick because of the contaminated products, so I'd avoid purchasing romaine lettuce if possible or suggest triple checking the originating location of your produce if you really need a salad in the coming days.