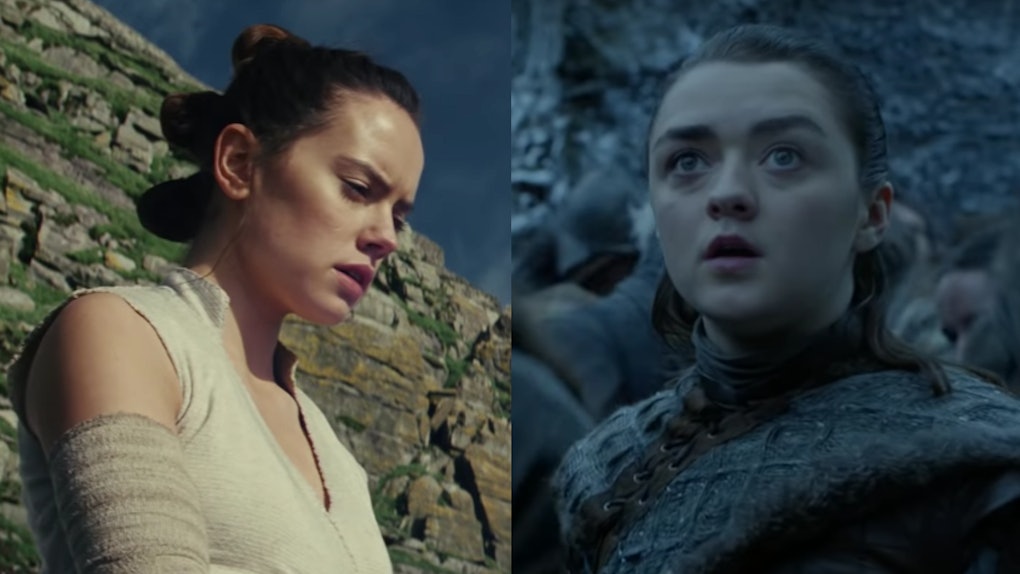 The world of Game of Thrones is pretty intense. You can spend hours upon hours studying up on all the lore of the Seven Kingdoms and beyond, and I'm absolutely sure many fans out there have. There are very few fandoms that can match the fervor and and passion that the Game of Thrones fandom has. But, if there is one other that can come close, it's the Star Wars fandom. Both are franchises with elaborate fantasy worlds and way too many characters to count. Plus, Star Wars does have a good 30 years on Game of Thrones, so it makes sense that it's had time to build its ravenous fanbase. But, the two shows are tied together in more ways than you might even realize. There's a Star Wars and Game of Thrones connection that even the most knowledgeable of fans in either camp might not know about. And this connection is all about what's been going on behind the scenes.

While fans know that George R.R. Martin didn't make it to the set of the final season of Game of Thrones, another white-haired creator of fantasy worlds did. George Lucas, the original man behind the Star Wars movies, paid a visit to the Game of Thrones set in Belfast during production of the series' last season. Don't worry, nobody in Westeros is trading in Valyrian steel swords for light sabers (at least probably, although you never know since the plot details of the last Game of Thrones season have been kept under such tight wraps). No, Lucas was visiting the set so he could pay a visit to the Game of Thrones showrunners David Benioff and Dan Weiss. Benioff and Weiss are working on writing a brand new Star Wars trilogy.

There aren't many details out about the upcoming Star Wars trilogy, but many are confident that Benioff and Weiss are the right ones to continue the franchise. In fact, some of the Game of Thrones actors talked about Lucas's visit and how Star Wars could use some of the epic storytelling in Game of Thrones. Liam Cunningham, who plays Davos Seaworth, told Entertainment Weekly:

It’s funny because George came here and talked to the boys, and the one thing the Star Wars franchise has been missing lately is decent storytelling. There’s a lot of brilliant stuff in Star Wars, it’s an epic franchise, but occasionally, story-wise, it’s left a little to be desired. Dan and David are brilliant at surprises and can transfer the demographic from this show to that [franchise]. They’re incredible at adapting a world and making it their own and they could add a layer of complexity to it.

When Benioff and Weiss take the reigns of the next Star Wars chapter, there will be at least one familiar face there. Gwendoline Christie, who plays Brienne of Tarth on Game of Thrones, also plays Captain Phasma in the Star Wars franchise. Benioff joked to EW that their Star Wars stories will focus on Christie's character. He said, "Our Captain Phasma origin story is going to blow people away."

Before Benioff and Weiss move on to Star Wars, fans still have the last season of Game of Thrones to soak in. Season 8 starts on HBO on April 14.

More like this
17 Tweets About Simu Liu In The 'Shang-Chi' Teaser, From Proud 'Kim's Convenience' Fans
By Dylan Kickham
This 2021 'Game Of Thrones' Season 8 Trailer Is So Confusing... & So Good
By Ani Bundel
Kathryn Hahn Hopes To Explore Agatha's Backstory In Future Marvel Projects — EXCLUSIVE
By Dylan Kickham
Stay up to date