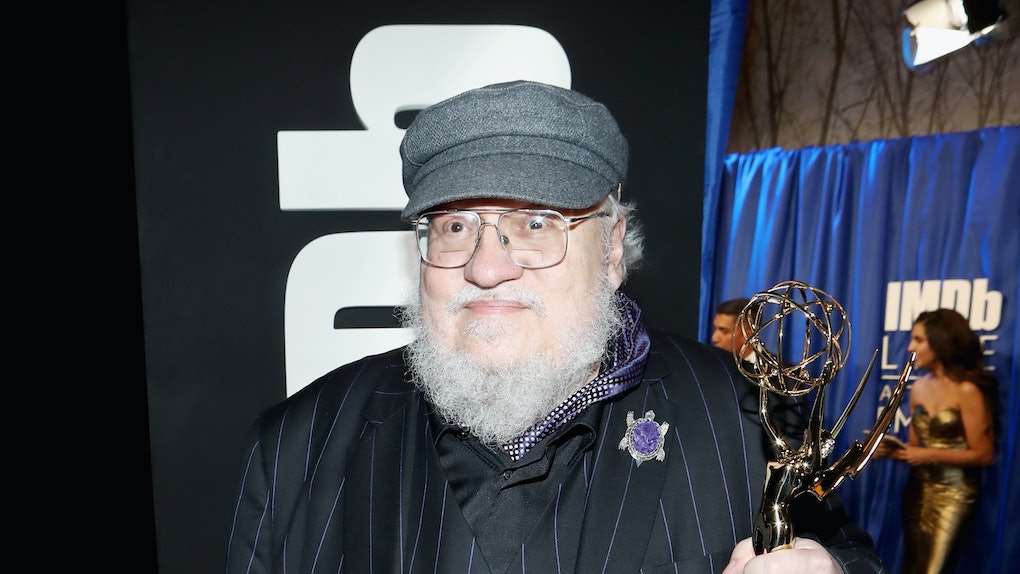 Will George R.R. Martin Be In 'Game Of Thrones' Season 8? He Came Clean About His Cameo

The question on every Game of Thrones fan's mind is who will sit on the Iron Throne when the series ends this summer. But, the truth is, there's always been one true leader in the Game of Thrones universe all along: the creator of the entire world of Westeros, George R.R. Martin. The author of the book series A Song of Ice and Fire created the entire world that the TV series is based on, and he's been an indispensable part of guiding the story along for all eight seasons. Since he's been such a huge part of the story off camera, fans are wondering if he'll jump in front of the camera for the series final season. So, will George R.R. Martin be in Game of Thrones Season 8?

The Game of Thrones showrunners David Benioff and Dan Weiss extended an invitation to Martin to gave a cameo in the final season of the epic series. But, Martin is based in New Mexico, and filming would have meant he'd need to take a trip to Northern Ireland. He wasn't really on board for that. Martin told Entertainment Weekly:

David and Dan invited me to a cameo in one of the final episodes, which I was tempted to do. But I didn’t think just for the sake of a cameo I could take the time to return to Belfast.

There are probably millions of Game of Thrones fans out there who would drop everything for the chance to appear on the show, and to most, Martin's refusal probably seems ludicrous. But, Martin did have a good reason so skipping the flight to Europe. Instead of filming the cameo, he wanted to stay in the States to focus working on his latest book The Wins of Winter. It's the sixth book in the Song of Ice and Fire series, and Martin's been struggling to complete it for the last eight years. So, if Martin giving up his cameo means that fans will be getting more books sooner, then it'll hopefully be worth it. After this sixth book, Martin plans on writing the seventh book in the series, A Dream of Spring, so there's plenty of writing ahead.

There actually could have been a Martin cameo much earlier in the series had things gone a little differently. Martin told EW:

There was a cameo in the original pilot that was cut. I was a guest at Dany’s wedding. But that was when she was played by Tamzin Merchant so all that footage got thrown out when we recast with Emilia Clarke.

It's hard to imagine another actor playing the Mother of Dragons besides Clarke, but it also would have been very cool to see the creator of the whole Game of Thrones world make an appearance. Maybe someday the producers will release that wedding scene as an alternate universe version of Dany's life? One can only dream of way fans will get to see that scene on air.

Even though Martin won't be appearing on the show, you can still see Game of Thrones when it returns to HBO for its final season on April 14.

More like this
This 2021 'Game Of Thrones' Season 8 Trailer Is So Confusing... & So Good
By Ani Bundel
12 Books Like 'Shadow & Bone' That Take You On A Magical Adventure
By Kelly Pau
Emilia Clarke's Comic Book 'Mother Of Madness' Is Full Of Girl Power
By Ani Bundel
Stay up to date