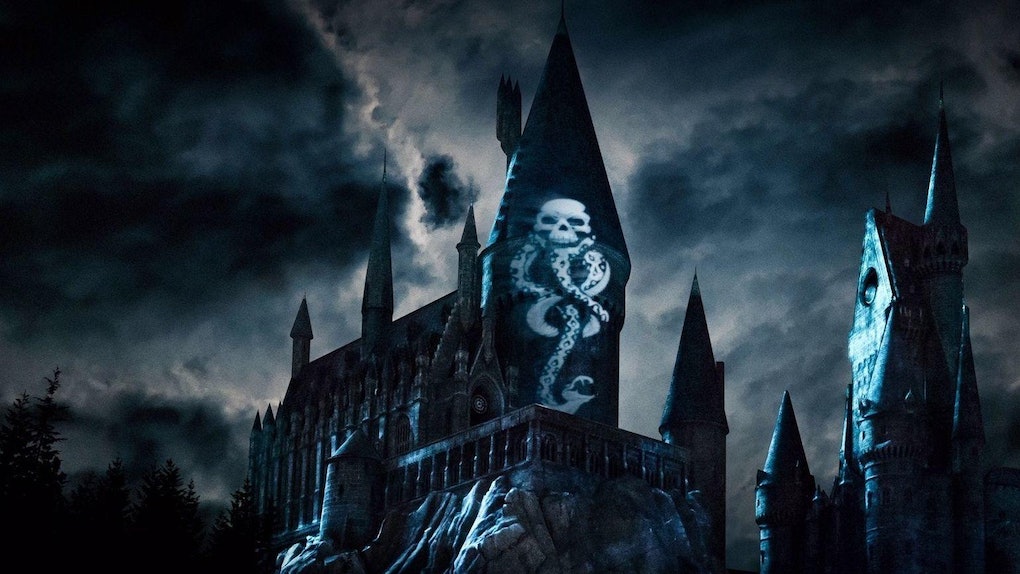 Accio Harry Potter fans! Have I got some spellbinding news to share. You may have recently noticed the Dark Mark on your arm tingling because The Wizarding World of Harry Potter just launched a Dark Arts light show. Created with wizards and witches who tend to lean more towards the dark side in mind, the new light show will include a display of lights, music, and special effects centered around dark magic and it is set to premiere later this year at both Universal theme parks in Orlando and Hollywood.

On Feb. 28, Universal Studios shared in a press release that guests will see Death Eaters and other characters like Dementors, Aragog, and Mountain Trolls light up the night sky before Lord Volde – I mean, He-Who-Must-Not-Be-Named – himself makes an appearance during the nighttime spectacular. Towards the end of the show a Patronus charm will be cast and vanquish the evil — until the next night of course.

The upcoming spectacle is said to feature a new musical arrangement based on John Williams’ original music from the film series, and will be conducted by William Ross and recorded by the London Symphony Orchestra. The brand new event will also take on a more sinister turn as opposed to its light show predecessors, the Nighttime Lights at Hogwarts Castle and The Magic of Christmas at Hogwarts Castle. The show will run in Universal Studios Hollywood from April 13-28 then again on May 25-27. Additional dates, including those in Orlando, have yet to be announced.

News of the Wizarding World’s new light show comes after the recent revelation that a new roller coaster will also be heading to the Wizarding World of Harry Potter. Hagrid’s Magical Creatures Motorbike Adventure, which is set to open in June of this year, will take guests on an exciting ride on the lovable half giant’s bike as they encounter numerous magical creatures. Set to open exclusively at the Universal Studios resort in Orlando, the thrill ride is said to be their "most highly-themed coaster yet."

The new themed ride will join other Harry Potter related attractions in Universal Studio's Islands of Adventure, including Harry Potter and the Forbidden Journey, which takes riders on a tour of Hogwarts and it's grounds, along with the tame but still thrilling Flight of the Hippogriff coaster. Guests can also hop on the Hogwarts Express and travel to the other side of Universal's property where they will find Diagon Alley and the exciting Escape From Gringotts attraction.

Meanwhile, Dark Arts at Hogwarts Castle is the latest addition at Universal Studios in Hollywood following the opening of Kung Fu Panda: The Emperor’s Quest last June and the reimagined Jurassic World ride that is also set to reopen later this year.

Universal Studios fans took to Twitter to share their excitement over the news with one user tweeting that it was "Just another reason to visit Universal again" while another shared, "You guys keep finding ways for me to come back stop my wallet can't take this!"

Both wizards and muggles alike are excited for Universal's latest development so you better practice all of your unforgivable curses and pledge your allegiance to the Dark Lord before Dark Arts at Hogwarts Castle premieres.

More like this
'Thor: Love & Thunder' Cast, Plot Details, Premiere Date, & More
By Ani Bundel
'Schitt's Creek's Rosebud Motel Is For Sale At $1.6M, So That's A Real Quick No
By Rachel Chapman
Will BTS' Camping Collection Restock? Here's What To Know About The Helinox Collab
By Marisa Casciano
Stay up to date