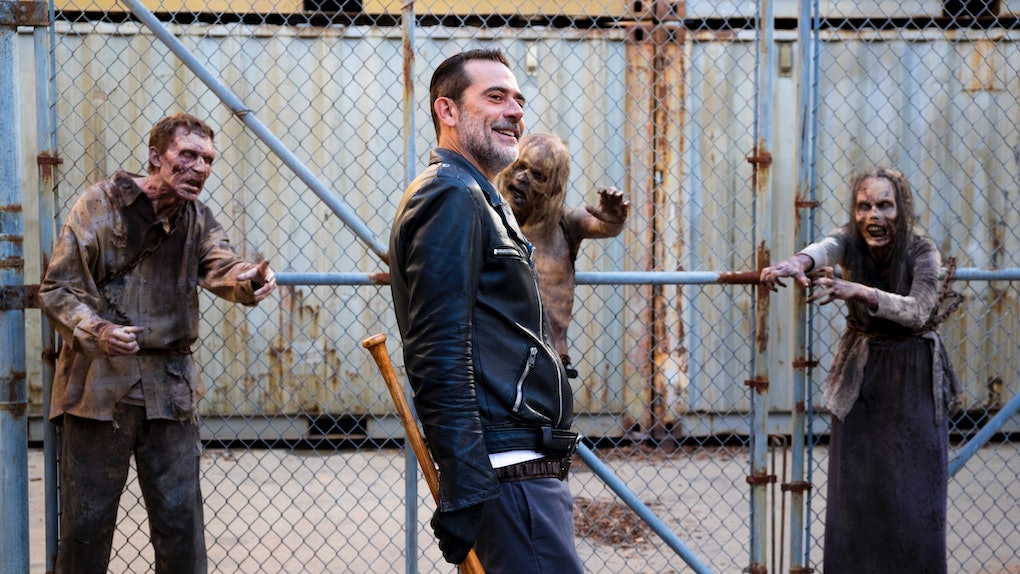 This season of The Walking Dead hasn't been without its major shocking moments and deaths. But in the last couple of minutes of Season 8 Episode 11, the plot truly thickened. Negan has apparently discovered a new tactic that the Saviors can use against the Alexandrians, and it's looking like the "All Out War" will seriously be ramping up in these last upcoming episodes — and the teaser we got for next Sunday's installment gave us a glimpse into how that war might pan out. The Walking Dead's Season 8 Episode 12 promo proves that this war between Rick and Negan might be headed to an end.

The promo that followed Episode 11 shows the Saviors advancing on the Hilltop, using weapons that are covered with zombie guts to use on the Alexandrians in their attempt to take over their compound. Simpson looks like he's leading an army of Saviors and shouts "For Negan!" just as they are about to move out — and Negan's band of loyal followers repeat it back in a military fashion. It's no secret that Rick and Negan are bound to get into a head to head battle, and this promo teases that it might happen in next Sunday night's episode.

Episode 11 teased a major plot development in this series.

Towards the end of the episode, we saw Negan appear to figure out a new way to attack the Hilltop and the Alexandrians. He (very graphically) pulled off some zombie flesh from one of the "walkers" that he had chained on the fence of the Saviors' compound, and smeared his favorite weapon, the barbed-wire baseball bat Lucille, around in the gore. He told his fellow Saviors that he has a new idea in his plan to attack Rick and his crew. "No more smashing and bashing with this," he explained to the Saviors, gesturing with Lucille. "With this it can just be a touch, or a big wet kiss. Either way, this gets you you full membership and that's what we want. We want people to join the club!" That club, we can assume, being Club Zombie. He finished, "Hilltop is gonna learn to toe the line one way or another, whether it's dead or alive."

Basically, Negan is going to start using zombie flesh in his plan to takeover the Hilltop. Negan seems to have figured out that if a human comes in direct contact with zombie flesh or gore they can become infected. This is major, because up until now we haven't for-sure confirmed that this is a possibility. So how did Negan figure this out? Back in Episode 5 of this season, he and Father Gabriel covered themselves in zombie guts in order to ward them off. Toward the end of that episode Gabriel came down with a fever, which is the first sign of zombie infection. So, it looks like Negan put two and two together.

But back then we didn't get confirmation that his symptoms were actually related to the contact he had with the zombie guts. We didn't know that this is the reason Gabriel became sick, but after Episode 11 we can probably say that this fan theory is pretty much confirmed. In tonight's episode, we got to see just how bad Gabriel's vision has been deteriorating quite literally by looking at the world through his eyes. And his situation is not looking good at all. He basically can only see a blurry fragmented portion of the world, and I'm guessing it's not going to get any better.

And now Negan is using this new information to his advantage, and in these upcoming episodes we will see just how this new plan will unfold. And until next Sunday this teaser will have to hold fans down. Will Negan infect Rick and turn him into a zombie? Or will Rick figure out a way to defeat the Saviors when they attack the Hilltop? I guess we'll find out.