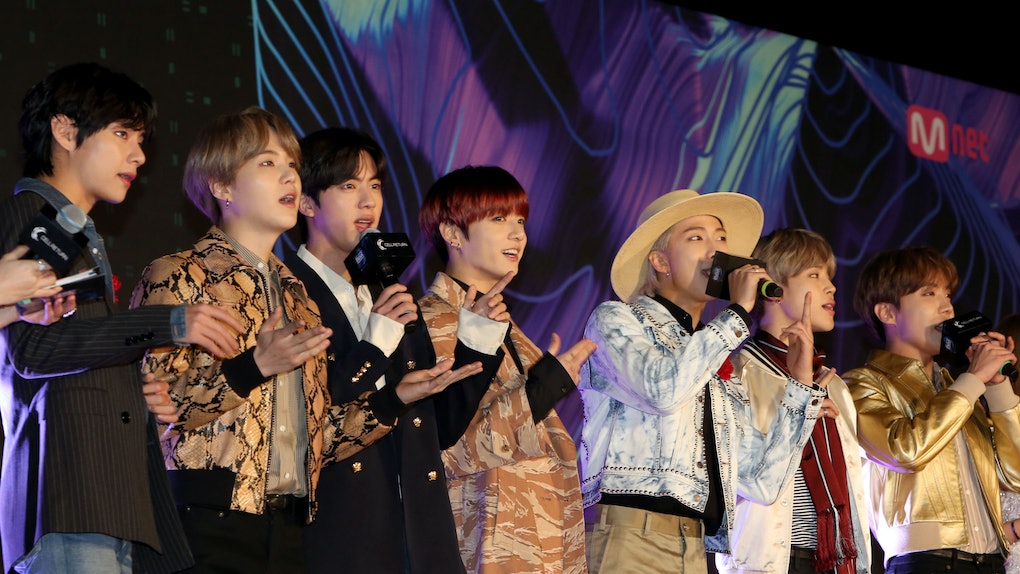 BTS and TXT may not see each other as often as they'd like because of their busy schedules, but the end-of-year Korean award shows are changing that. In the span of a few days, MOARMYs have been given the rare opportunity of seeing several BTS and TXT interactions go down. Most recently, both groups performed at the 2019 Mnet Asian Music Awards, and they couldn't help but show each other some love. The videos of BTS and TXT reacting to each other's MAMAs performances are so endearing.

Fans saw all their favorite K-Pop groups under one roof when the 2019 MAMAs ceremony took place at the Nagoya Dome in Japan on Dec. 4. Because both TXT and BTS were on the lineup, fans were hoping the guys would interact with one another at least once, but what happened exceeded MOARMYs' expectations. The groups not only interacted with each other the entire night, but they gave each others massive support during their respective performances.

Knowing this was TXT's first MAMAs appearance, BTS was in full hype mode to support their brother group (both TXT and BTS are repped by Big Hit). TXT performed their latest single, "Run Away," from their album, The Dream Chapter: MAGIC. Just like their "Run Away" music video," TXT's MAMAs performance was totally magical, and it was clear BTS was so amazed. RM, Jin, Suga, J-Hope, Jimin, Jungkook, and V were so focused on TXT's performance, and, a few times, their eyes even opened so wide in shock at what was happening in front of them.

BTS then performed a medley of their biggest hits, including throwback tracks, like "N.O" and "We Are Bulletproof Pt.2," as well as their most recent songs like "Boy With Luv," "Mikrokosmos," and "Dionysus." As BTS performed, TXT's Yeonjun, Soobin, Beomgyu, Taehyun, and Hueningkai cheered BTS on.

TXT had no trouble singing along to BTS' songs. In fact, the guys were so excited, they even performed some of the choreography right from their seats. During "We Are Bulletproof Pt. 2," TXT simultaneously did BTS' hand choreo and it was so in sync.

BTS and TXT will definitely be running into each other at more events in the future, so sit tight for more adorable moments like these ones.

More like this
Olivia Rodrigo's Debut Album: Title, Release Date, Music Videos, Tracklist, & More Details
By Michele Mendez
Cara Delevingne's Old Photo Of Her Grandmother With Prince Philip Proves It's A Small World
By Brandy Robidoux
Prince Harry Looks Like Prince Philip Did In This Photo From The '50s & It's Wild
By Michele Mendez
Stay up to date