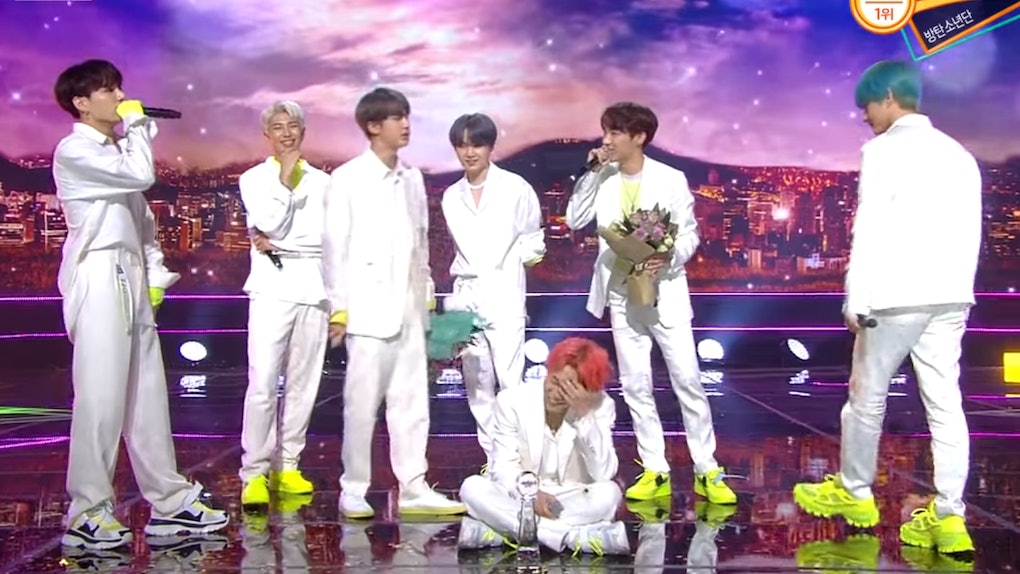 BTS is back in South Korea and they’re promoting the heck out of Map of the Soul: Persona! The boys recently appeared on Music Bank and performed two of their new fan faves: "Boy With Luv" and "Dionysus" (though what BTS song isn't a fan favorite?) for their adoring K-ARMYs. And let me tell you, they did not disappoint. The videos of BTS’ Music Bank performances of "Boy With Luv" and "Dionysus" will totally make your heart race!

As I mentioned, BTS performed "Boy With Luv," which went over really well with fans who attended the show. Prior to appearing at Music Bank, though, the boys actually pre-recorded their performance on Music Core, so they were doing double duty that day — not that anyone noticed based on their energy on stage. Many fans were worried about the toll this was taking on them.

Some fans were worried for the boys, too.

“The fact the boys recorded at music core and they went straight for pre-recording at music bank... how are their bodies doing this?” one fan said.

It’s true; comeback schedules are, indeed, demanding. Especially when you’re part of the most iconic K-Pop group ever. Luckily, BTS didn’t show any signs of fatigue during their Music Bank performance (they must have planned to get their rest in earlier). It just goes to show how dedicated they are to their careers and their fans. I’m sure it’s not easy being in such high demand, but it seems BTS truly loves what they do. Actually, the boys took to Twitter to reassure fans that they're all good — because ARMYs actually give them energy.

"From the bottom of my heart, thank you so so much. You all must have been so sleepy and exhausted. We’re really alright! So don't worry, quickly go and rest. My sincerest thanks for today!" Jimin tweeted, according to a translation by the fan account @BTS_Trans.

"Thanks to ARMYs, we really do gain strength!!! Thank you!!!" J-Hope tweeted, according to @BTS_Trans.

In any case, here’s a look at the incredible performance BTS gave on Music Bank. Trust me when I say the boys smashed it!

There "Boy With Luv" performance featured the boys wearing all white suits and took place on another set outside a theater that'll make you wish you could go on a movie date with these seven cuties.

The boys won first place on the show, and in honor of their win, they decided to put a literal spin on "Boy With Luv." Since its Korean title is "A Poem for the Small Things," they performed the whole beginning of the song like they were reciting a very emotional, dramatic poem.

Now that you’ve watched the performance, don’t you think they did a great job? Those boys never disappoint, especially when it comes to showing up for their fans. But it goes both ways because their fans always show up for them as well! For example, BTS’ video for “Boy With Luv” broke three (yes, three!) Guinness World Records.

That is an incredible feat and huge step forward for BTS who seems to be taking over the world with everything they do!

So, even though the boys may have been a little tired for their Music Bank performance, they know it’s worth it in the end because their fans give them so much love in return! There’s no question that BTS and ARMYs have a wonderful relationship and give so much to each other. It’s truly amazing!

More like this
These Tweets About BTS' 'Bang Bang Con 2021' Sum Up The Epic Performance
By Cianna Garrison
BTS' 'The Best' Japanese Album: Release Date, Tracklist, Music Videos, & More Details
By Michele Mendez
With 'Like Water,' Wendy Found Her Biggest Cheerleaders In Her Red Velvet Bandmates
By Michele Mendez
Stay up to date