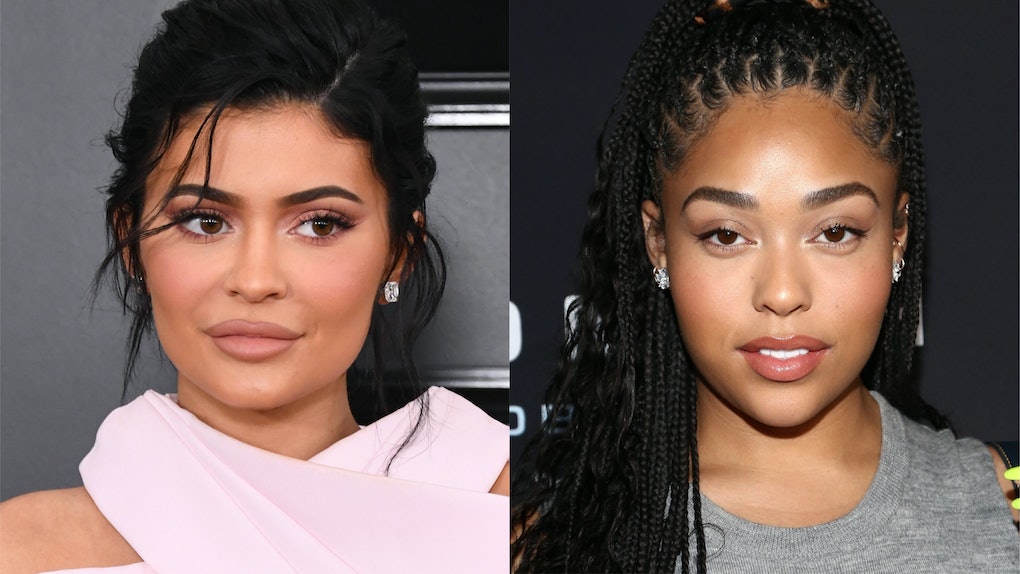 Back in February, it seemed all hell broke loose within the Kardashian household when reports surfaced that Tristan Thompson and Jordyn Woods kissed at a party. I mean, Woods was Kylie Jenner's bestie and was basically like a sister to Khloé Kardashian. If it was true that Thompson and Woods got intimate, it would be the ultimate betrayal. Back then, Khloé had a lot to say about the matter on social media, while Woods addressed the situation through an interview with Jada Pinkett Smith on Red Table Talk. But there's one person that fans really haven't heard much from and that's Kylie Jenner. Besides discounting her Jordyn Woods-inspired Lip Kit (ouch), Kylie has kept mum on all the drama. It seems that she saved her response for TV because a new video of Kylie Jenner talking about Jordyn Woods after the Tristan drama reveals what was on her mind all those months ago.

In a new clip from Keeping Up With the Kardashians, Kim, Khloé, and Kylie sit down to talk about the drama with Thompson and Woods. Khloé started the conversation off by reminding her sisters about the time Thompson cheated on her back in April 2018. "Tristan, we've all known what he's capable of," she said. "Look what he did when I was 9 months pregnant. But I knew who he was. I never in a million years thought that's who she [Jordyn Woods] was."

Kylie just sat there thinking about what Khloé had said. Since the drama involved her bestie, I could imagine that it was incredibly awkward for her to be in the middle of it all. Because of how close the Kardashian family was with Woods, Kim said that "no one believed" that she could betray them like that.

Then Kylie finally spoke up and revealed what happened between her and Woods. She said, "I called her and she didn't really say anything. She was just like, you know, crying the whole time."

She continued, "And I was just telling her, 'I'm like scared of you now. Like, you're capable of waking up the next morning with a smile on your face.'"

Oooh, Kylie seemed pretty serious about the whole matter, but what she said next was what really hit me.

From there, it seemed that there was no making amends with Woods because she crossed a line by messing with Kylie's family. Kylie finished by saying, "You could do whatever, but when it affects my family, me, then that's when it's a problem."

Meanwhile, Kim thought the least Woods could do was apologize to Khloé in person, but she apparently didn't even do that. Kim said, "But I also think that the tone of not ever saying sorry, like, I would've been on Khloé's doorstep bawling my eyes out being like, 'F*ck! I don't know what the f*ck I was doing. Holy sh*t, I'm a f*cking idiot.'"

Watch Kim, Khloé, and Kylie talk about the drama below.

That was a lot. I seriously feel so bad for Khloé, but I also feel bad for Kylie, too. I mean, she did lose her bestie, after all.