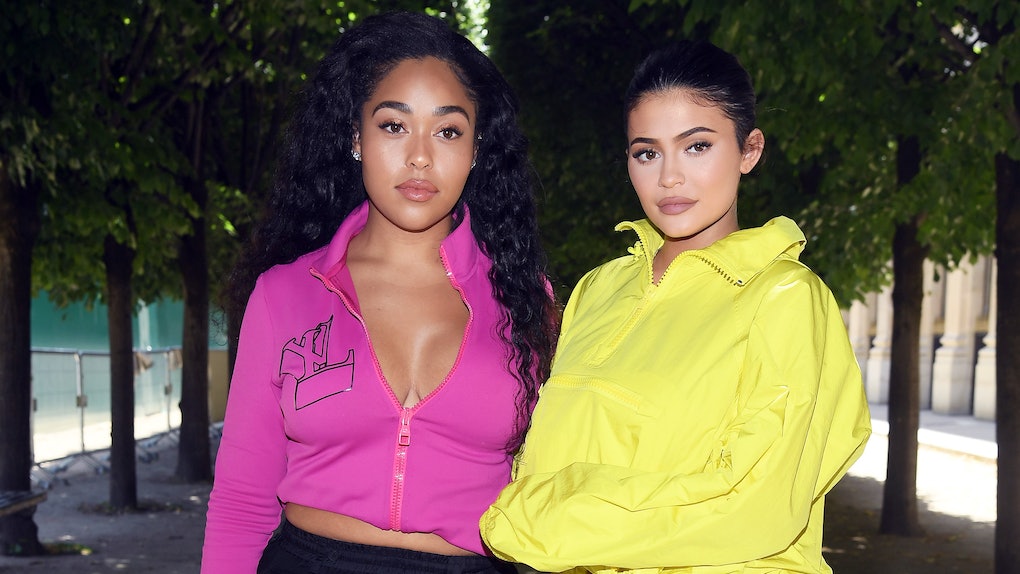 Are Kylie Jenner & Jordyn Woods Friends Again? They May Be Trying To Work Things Out

They say time heals all wounds and, apparently, that's doing the trick for Kylie and Jordyn. A new report on the two former best friends' relationship suggests that these two have started to heal the wounds from the whole Tristan Thompson cheating nightmare. It's definitely going to leave Kardashian stans asking, "Are Kylie Jenner and Jordyn Woods friends again?" But the reported answer is complicated.

According to a report from Us Weekly, a source claimed, “Their relationship is on the road to recovery." Elite Daily reached out to Jenner and Woods' teams for comment on this report, but did not hear back by the time of publication. Their friendship seemed to have ended cold-turkey when Woods and Thompson reportedly kissed at an after-party at his California home in February 2019. Woods adamantly said in an interview with Jada Pinkett Smith about the ordeal that she didn't initiate any hookup with Thompson (who was still in a relationship with Khloé Kardashian at the time) and that all that happened between them was he tried to kiss her as she left his house.

The biggest issue, according to Woods, was that when she was asked by Kardashian if Thompson displayed any inappropriate behavior at that party, Woods said nothing happened. The trust between the Kardashians/Jenners and Woods was broken when they learned that Thompson had actually tried to hook up with Woods, and she didn't tell Kardashian about it. She claimed in her interview with Pinkett Smith that she was trying to protect Kardashian's feelings, admitting that was the wrong move.

Woods ended up moving out of Jenner's guest house that she was living in, got her own house, and focused on orchestrating a glow-up for herself that included snagging a role on the Freeform show Grown-ish.

Now, the source told Us Weekly that Woods is feeling happy in her independence.

Woods reportedly “is so happy in her new house,” the source said. “She wants a fresh start; she’s proud of herself.”

While the two are reportedly working on mending their friendship, things won't be able to go back to the way they were.

“Kylie knows the separation from Jordyn will help both of them — and Kylie’s family — to heal," the source added. It seems like while Jenner might be ready to mend things, the Kardashian family probably won't be welcoming Woods back into their good graces anytime soon (or ever...).

Another source told the outlet that Woods is turning over a new leaf, and is working to make a name for herself that isn't connected to the Kardashian empire.

“Jordyn has been trying to show the world that she isn’t riding on the Jenner-Kardashian coattails any longer," they said, "and that she’s doing her own thing and living her life comfortably.”

Woods' whole Instagram vibe is definitely that of someone who is clearly trying to change up their life. She announced on May 30 on her Instagram that she booked a small role on Grown-ish.

"I’ve been waiting to share this with you guys but I am SO excited to guest star on this season of #grownish," she said in her caption. "It returns June 5th on @freeform. This was the first role I’ve ever booked and I was nervous at first but I got past that and had the best time. Take risks and stay consistent to your journey, you never know what the world has to offer."

Maybe the world is now offering up a Kylie and Jordyn reunion? Only time will tell.