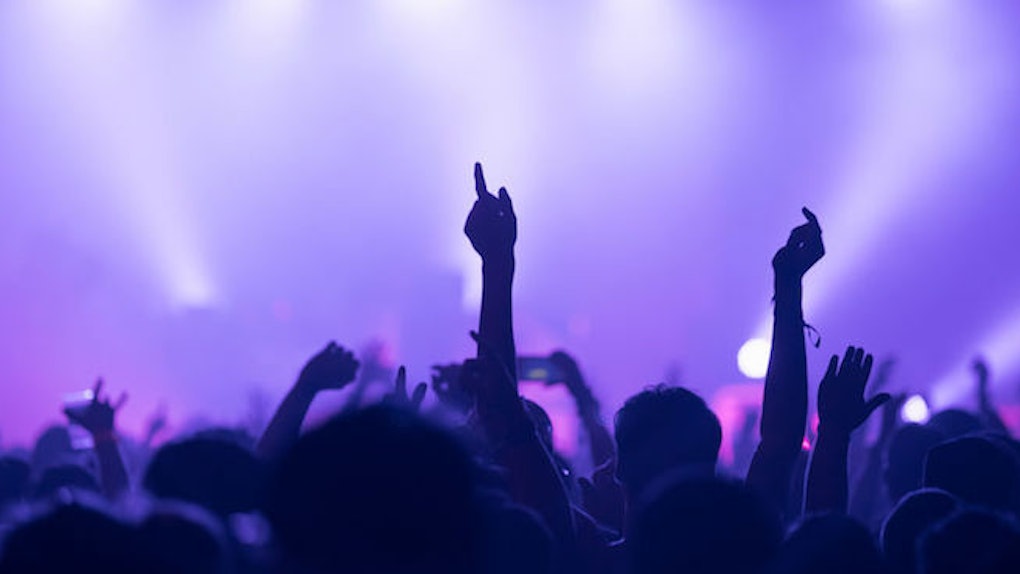 When you go to concerts, you usually have your eyes glued to the stage, right? Well, that wasn't quite the case for 19-year-old Kari Carberry and her father, who took a slightly different, but totally heartwarming approach to enjoying live music at a recent Three Days Grace concert in Canada, and are now the talk of the internet. A Facebook video of Carberry using sign language to sing to her deaf father at the concert has gone viral, and it's, quite frankly, the sweetest thing I've ever seen.

In an interview with CNN, Carberry explained that her dad, 53-year-old Darrin Carberry, was born deaf and wears a hearing aid in one ear, which "gives him some hearing," the outlet says. But this didn't hold the dad-and-daughter duo back from attending a concert of one of their favorite rock bands, Three Days Grace. "He is the one who got me listening to the band," Kari told CNN. "When I saw they were going to be in Edmonton, my dad was the first person I asked to go with me."

Carberry and her dad weren't the only ones with their eyes off the stage, though. The video of Carberry singing in sign language to her dad was taken by a fellow concertgoer, Jules Maria, who recorded Carberry's sweet gesture and posted it on Facebook, where it quickly went viral.

"At last night's concert, we witnessed something absolutely beautiful," Maria wrote in the Facebook post. "We couldn't care less about what was happening on stage, watching them was absolutely mesmerizing."

Kari also noted to CNN how awesome it was that Three Days Grace reposted the video of her and her dad: "It's the coolest thing on the internet right now," reads the band's post — and TBH, the rest of the internet couldn't agree more.

"Now that's love at its finest!!" one Facebook user wrote. "Who cutting the god damn onions!? I'm crying here," confessed another (#same). Another person in the comments section wrote, "My parents are deaf and this was so amazing to see. Thanks for capturing this and sharing. I had to share it. love the band too."

Yet another Facebook user wrote, "All concerts need to have professional [American Sign Language] interpreters," which actually raises a great point.

According to Vice, ASL interpreters are indeed becoming more common at concerts and music festivals, giving concertgoers with hearing impairments a notably fuller experience. However, according to a CNN article published in August 2018, though the Americans with Disabilities Act clearly requires that any public place should be accommodating to deaf people and provide interpreters without question, many places don't always comply.

Additionally, Lindsay Rothschild-Cross, an ASL interpreter and translator, told CNN that, sometimes, venues, musicians, and other concertgoers might be intolerant and rude toward disabled individuals and their translators — which is why, she told the news outlet, she continues to fight ceaselessly for accessibility, acceptance, and open-mindedness toward deaf people and their right to an enjoyable, complete concert-going experience.

It's clear that more needs to be done in terms of having ASL signers and translators at concerts, music festivals, and the like, including advocacy for those who are disabled, and the correction of misconceptions pertaining to the community as a whole. In the meantime, though, Carberry and her dad won't be slowing their concert roll any time soon. "We definitely will be looking for more concerts in the future," she told CNN.