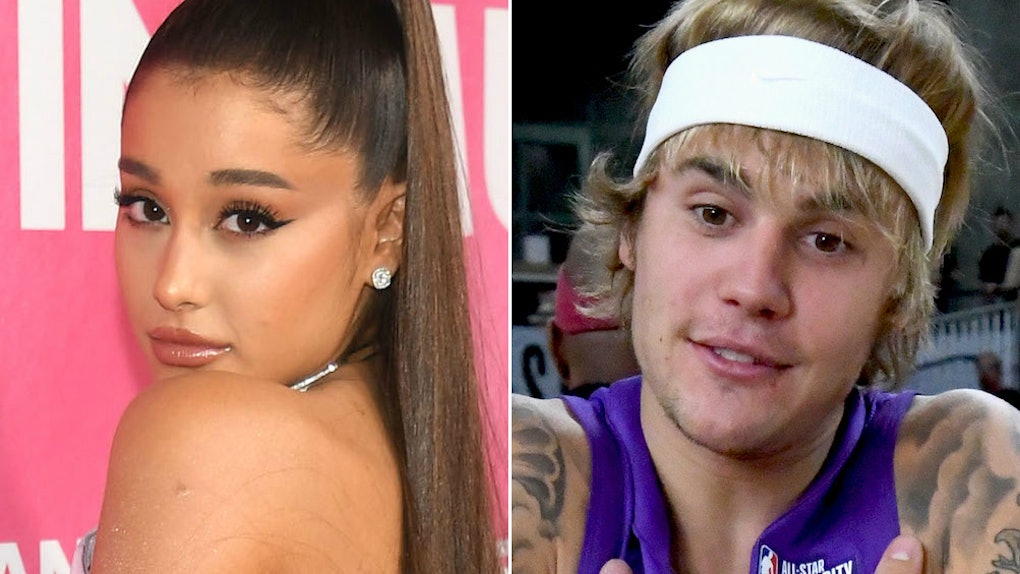 Ariana Grande completed her final Coachella set on Easter Sunday, and to surprise fans one last time after last week's Diddy, Nicki Minaj, and *NSYNC (!!) surprise performances, she brought out Justin Bieber! And of course, Coachella concertgoers caught it all on video. The video of Justin Bieber performing "Sorry" at Coachella with Ariana Grande is awesome, and it marks Bieber's first performance in two years. The Biebs is prepping for a comeback, y'all.

Instead of repeating last week's special guests, Grande opted to do the majority of her second Coachella set solo. Well, she was still accompanied by her amazing dancers and background singers, of course. They are the backbone of any performance. (Gotta give credit where it's due.) But near the end of the set, Grande brought out Bieber to sing his hit song "Sorry" together.

Similar to when she let *NSYNC shine during solo moments "Tearin' Up My Heart," Grande let Bieber take a moment for himself during the song and strut up and down the runway she had incorporated into her stage so he could connect with the fans. And apparently, this performance was effectively impromptu!

"I haven't been on stage in like two years. I had no idea I was going to be on the stage tonight," Bieber said while on stage with Grande.

"I had to get my groove back," he added. Then (possibly making this moment a little too much about himself... this is still Ari's set, bro) Bieber did a shameless plug by revealing to fans that a new album will apparently be coming soon.

Ladies and gentlemen, I present the two most famous millennials!

Bieber also took to Twitter to thank Grande for the good time.

"Thank you @ArianaGrande. Thank you @coachella. That felt right. Love you," he tweeted after the performance.

Grande didn't come to play with these Coachella guest appearances. When Bieber came on stage, she told the crowd that this performance wasn't planned very well in that it was pretty much a spur of the moment decision, so that explains why the performance didn't involve much choreography like the *NSYNC one. But it was still fun to watch the Biebs get back on stage and see these two longtime friends perform together.

Outside of Ari's milestone Coachella performance (this was her first time headlining the festival), Bieber also had a great time just being in the audience the last two weekends.

This was a huge moment for Eilish because she's been a massive Bieber fan for years, in case you're scratching your head over why this meeting was adorable.

And on Friday, Grande and Bieber appeared on a new track together! Lil Dicky's new single "Earth" was a star-studded song that came with an equally star-studded (but animated) music video, all about saving the planet.

It's been a big week for Ari and the Biebs! But probably a much more stressful one for Ari 'cause, you know, she was headlining Coachella and everything.

More like this
Justin Bieber & Hailey Baldwin's New Matching Tattoos Are A Nod To 'Justice'
By Corinne Sullivan
14 Justin Bieber Songs To Listen To When You're Falling In Love
By Rachel Shatto
Taylor Swift's 'Fearless (Taylor's Version)' Lyric Changes Are Small, But Meaningful
By Michele Mendez
Stay up to date