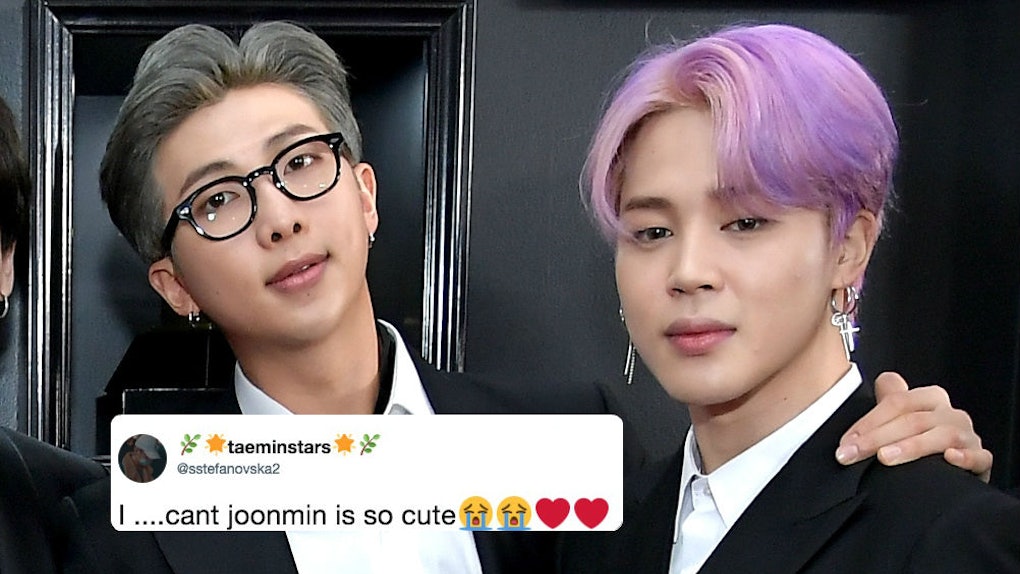 The members of BTS have such an amazing bond as a group, but what makes them work so well as a whole is that each individual member has such a special bond with each of their individual bandmates as well. That's why fans are treated to glimpses of the boys on "sub-unit" outings together almost as often as they get to see the boys hanging out in their full 7-member glory. Case in point: This video of BTS' Jimin & RM's biking trip will make you swoon over their clearly deep friendship.

On March 11, RM took to Twitter first to share that he and Jimin had gone on a biking date together. He shared a photo of his feet sprawled out in front of him and his bike with the sun setting in the distance, which indicates the boys may have watched the sunset together. The other photos are selfies with Jimin. Jimin's face is almost entirely obscured by his black beanie and his massive face mask, but his eyes are unmistakable.

According to a translation by Twitter user Soo Choi, RM captioned the photo, "With Jiminie for the first time since long time ago 😁😁 #RM #JIMIN."

Awwwww. These days, the boys are undoubtedly working non-stop leading up to their all-but-confirmed comeback, so it's sweet to see that they still make time to hang out with each other and just appreciate each other's company doing seemingly mundane things like going bike riding together at sunset.

And just wait until you see the video Jimin posted from their trip.

In Jimin's video, it's dark out (when do these boys sleep, forreal?), and he's filming RM from behind as they zoom down the road on their bikes together. After a long beat of silence, RM turns around and shouts says something to Jimin in Korean.

Jimin echoed RM's thoughts about hanging out for the first time in a long time in his caption, writing, "First time in 3 years, with hyung," according to a translation by Cafe Army.

I'm already in a pretty emotional state knowing that Jimin and RM went on a bike trip together at sunset, but just wait until you hear what RM turned around to tell Jimin in his video.

According to a translation by Spotlight BTS, RM turns around and says, "Jimin-ah, you go first."

That's just RM casually taking his role as hyung seriously and telling Jimin to go in front of him so he can watch his back. Be still my beating heart!!!!! I'm literally quaking from all the UwUs that just burst out of my heart.

Jimin and RM aren't the only two members that have posted about going on outings together. Remember when Jin and Suga fulfilled their promise to go fishing together again after they failed miserably (and adorably) at catching fish while filming Bon Voyage in Malta?

And these are just the outings that the boys decide to share with their fans. Just think about all the fun times the boys have together that we don't get to see.

For example, remember when Jungkook revealed in BTS' Re:memVer VLIVE Party that he had to "crawl home" after filming their announcement episode of Bon Voyage season three?

I've been there, Jungkook. Truly.

Basically, these boys know how to have a good ol' time together and we're not always going to see it all going down. But fans wouldn't have it any other way!