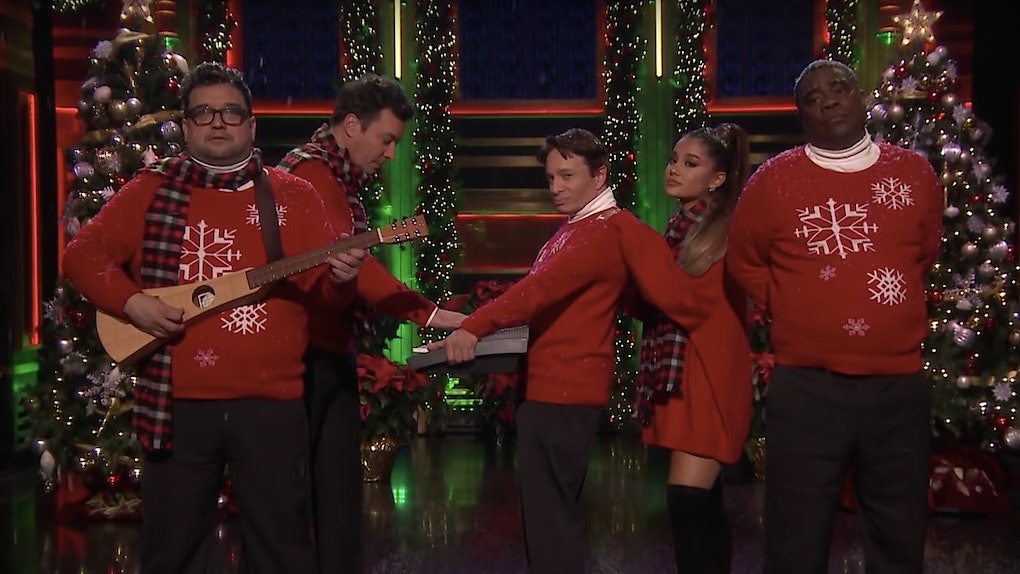 Ariana Grande loves her some Jimmy Fallon. The "Thank U, Next" singer is a frequent guest on the show, with her last appearance being the day Aretha Franklin died when she performed Franklin's "(You Make Me Feel Like) A Natural Woman." Grande made her latest appearance on the show on Dec. 18, and she gave not one, but two performances! The first was a cold open for the episode and they performed a classic Saturday Night Live Christmas sketch, and the video of Ariana Grande performing "I Wish It Was Christmas Today" with Jimmy Fallon is so hilarious.

The performance featured Fallon and Grande, naturally. SNL alums Horatio Sanz, Chris Kattan, and Tracy Morgan performed the hilarious bop as well. Fallon, Sanz, Kattan, and Morgan originally performed the song on Season 26 of SNL in 2000, then they performed it multiple times on later seasons of the show, as well as in 2011 when Fallon returned to SNL to host. Now, a reunion happened again, and it was performed with Grande on The Tonight Show Starring Jimmy Fallon!

The sketch consists of Fallon and Sanz singing the song while Kattan, Morgan, and Grande bop in place. That's it. Grande doesn't even sing. It's hilarious.

I don't care what your mama says, Christmas time is hereeee!

A classic Christmas bop if I ever did hear one.

Twitter loved that Fallon brought this SNL classic back.

The sketch has proven to be a truly iconic one over the years, so this was just a delight.

Grande wasn't there to give any interviews (Michelle Obama was!!), but she did take the Tonight Show stage to perform her new single, "Imagine." Grande dropped the dreamy single on Friday, Dec. 14, and it's a far different tone than "Thank U, Next."

Come on, whistle notes!! This marked Grande's first TV performance of the single.

The song revives an old relationship and paints a picture of what it would be like if it had survived. It's not clear which relationship of Grande's she's singing about in the song, but she doesn't have to namedrop her exes in every song now just because she did that in "Thank U, Next."

Step up the two of us, nobody knows us / Get in the car like, "Skrrt" / Staying up all night, order me pad thai / Then we gon' sleep 'til noon / Me with no makeup, you in the bathtub / Bubbles and bubbly, ooh / This is a pleasure, feel like we never act this regular

Then comes the catchy pre-chorus.

Then, Grande croons the dreamy chorus.

Knew you were perfect, after the first kiss / Took a deep breath like, 'Ooh' / Feels like forever / Baby, I never thought that it would be you / Tell me your secrets, all of the creep sh*t / That's how I know it's true / Baby, direct it, name in the credits / Like the movies, ooh

Then the pre-chorus and chorus repeat before the bridge where all of the angelic whistle tones come in. She repeats the lines "Can you imagine it?" and "Imagine" over and over until the song plays out. Sometimes I forget just how damn expansive Grande's range is, then she pulls sh*t like this and I'm like, "Oh, right."

Grande posted a clip of her Tonight Show performance to her Instagram to remind us just how damn high she can sing.

Can you... imagine ever being able to sing like that?! I wish it was Christmas today, and I also wish I could sing that f*cking high. Gah dayum.