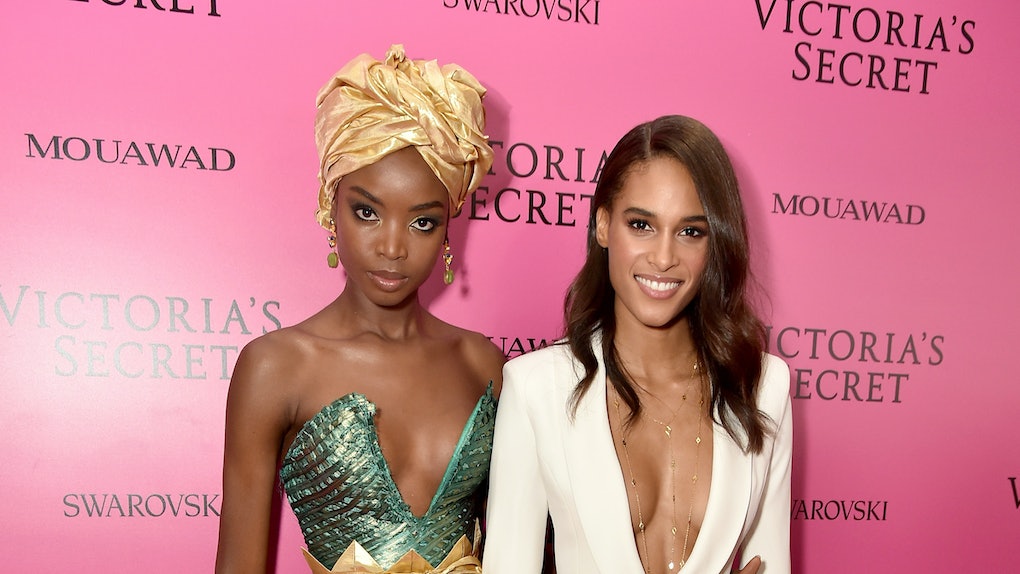 The Victoria's Secret Fashion Show 2017 Models Are More Diverse This Year & Like, Finally

Society is living in a time where racism is not more rampant, just finally out in the open. Everyday, I have literally no idea what insanity I'll see on social media. Throughout all of this chaos, it's refreshing to see that the Victoria's Secret models 2017 represent a more diverse picture this year. Some may say it doesn't matter, but for those that have experienced racism because they look different, rest assured that this can cause a positive impact.

Growing up, there were not many girls that looked like me in the media I consumed. I was obsessed with Barbies, but their hair wasn't unruly like mine. I related to the suburban angst of Lizzie McGuire and still hope to find my Gordo, but the show couldn't help me deal with being the only black girl in the class when we talked about slavery during Black History Month. Sigh.

Although I don't necessarily agree with how Victoria's Secret casts their show, and I think it's about time the world sees more curvy and plus-size models thrown into the mix (like hello my legs are not that long and my thighs do not look like that!), I can appreciate that I see myself racially showcased on the screen. This year not only did I see woman of all shades (#yaaassss melanin!), but it's especially nice to see the mold of "Victoria Secret Hair" being shattered.

It's important to note that this year's lineup of models don't just look diverse. The 2017 show is actually the most diverse (racially) in the lingerie brand's history of Victoria's Secret shows. Nearly 50 percent of the models are black, Asian or Hispanic, which is up 20 percent from last year. The models hail from the United States, United Kingdom, Brazil, China and many more countries.

Racial Diversity On the Runway Is Important

Many websites will tell you that diversity in the media is important for the younger generation, which is true. When I was young, I was so impressionable. The content I consumed shaped my identity. I wasn't afraid of my blackness, though, because I was surrounded by strong, black women that enforced the importance of loving my background.

But it was still difficult when I would turn on the television or buy a magazine, and only be marketed one particular look. The real question, for young me and many others, is why can't the-girl-next-door, all-American woman have dark skin and thick thighs?

Victoria's Secret has a habit of marketing what they are showcasing as the look. When you see beautiful women and are told that is what you should look like, and you don't see yourself represented, it's harrowing to say the least. That necessity to look like something you're not doesn't just go away either, it follows you well into your adult years.

This constant need to be something you're not perpetuates the stigma that if someone looks different outside of that image, then they must not be beautiful. For me, I've felt like the media says my version of beauty isn't acceptable. That's ludicrous, because it's important that each and everyone of us feel like the hottest woman in the world.

Seeing Natural Hair on the Runway Is Crucial

My favorite part of the show this year was seeing so many black models rocking diverse hair and cuts. Although I grew up loving my blackness, I had serious issues with my hair. I didn't understand why mine was naturally kinky, immensely thick, super unruly, and took hours to tame. Even with a relaxer, my hair still has a mind of its own. It wasn't until I started getting sick (with what I now know as Polycystic Ovarian Syndrome) and losing my hair was a symptom, that I realized how much damage I had done hating my hair all those years.

In the above moment when I finally saw hair that looked like mine on the runway, I began to appreciate what I have. Whether my hair is blown out and straight, or thick and textured, seeing black women rocking whatever style of hair they have forces me to gain some much-needed confidence. As a black woman, if I want to rock braids, extensions, my natural hair or a relaxer, that is my prerogative.

Black women can experiment with their look, and are encouraged to explore our options. It's not because Victoria's Secret finally viewed our differences as beautiful, because black girls and women still experience and see the negativity, but because women of color have started to propel each other up. You can see THAT camaraderie with the models walking this year.

So although I'm still disappointed that I didn't see diversity when it comes to body image on the runway, I can definitely cosign the fact that all shades can be angels. It's a work in progress, certainly, but I'll take it.