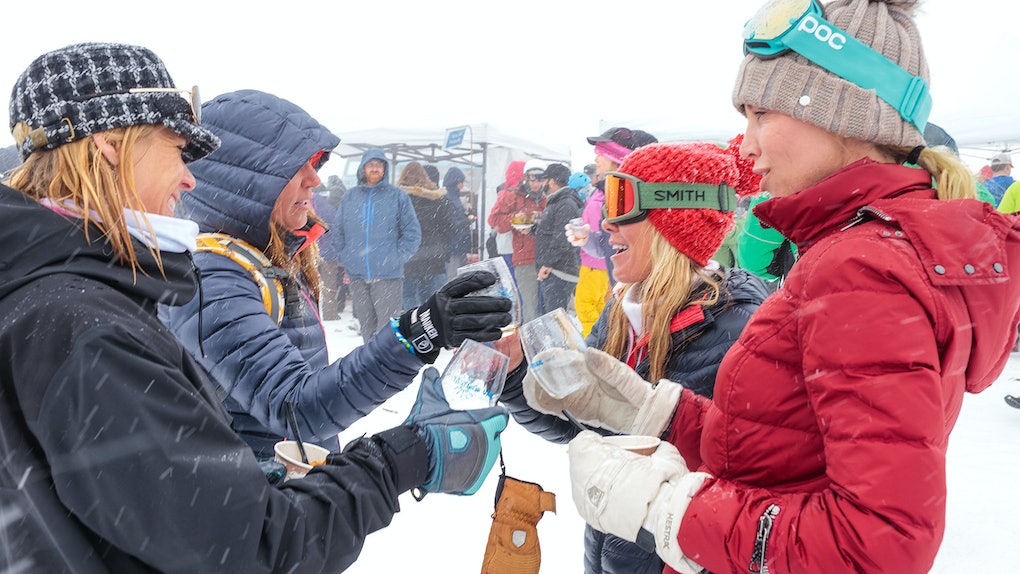 Just hours into a three-night stay in Vail — the Colorado ski town that looks more Austrian than American — a late night food run leads to one of the few establishments open past midnight. Sitting at the bar is a local man who, after gathering he's stumbled upon journalists, nonchalantly declares: "I've got a lot to say." There's a hesitation to listen at first, but the indulgence is immediately rewarded as he describes what he promises is the best wine tasting you've never heard of: The Vail Mountain Top Picnic.

A quick Google search pulls up info on an event that seems to be exactly what the title implies. For 28 years, the Taste of Vail festival has curated the best food and wine the town has to offer. Each spring, the festival returns with four signature events. The Mountain Top Picnic — hosted 10,000 feet above sea level — is by far the most novel of them all.

"It's just a unique environment," Julie, a patron who's frequented the event over a number of years, later tells Elite Daily. "A lot of wine tastings are just in big conference rooms and hotels, or big conference venues, whereas this one you're on top of a beautiful ski mountain."

So, 12 hours after receiving the recommendation, this writer and a photographer make their way up the slopes to see what the hype is all about.

It's Friday, April 6, and Elite Daily is in the Rocky Mountains along with other media members courtesy of GMC, an exclusive partner of the Vail Film Festival. That the film festival coincides with the Taste of Vail makes visiting the Mountain Top Picnic the perfect side mission.

And "mission" is very much the appropriate word.

Getting to the Mountain Top Picnic requires a short walk from the hotels and shops at Vail Square to the Eagle Bahn Gondola (or, cable car, for the laymen) which then travels for 10 minutes across a distance of over a mile and a half. With time, the scenic, aerial view of the village disappears into the fog as the cable car makes its way up the mountain. You can still see skiers making their way down the opposite direction, though.

By the time the ride is over, the drizzle that was at the base of the mountain is gone. It's snowing now, hard, which in itself is a mark of how much of a wild card this event really is.

"We were here three years ago, and I was in a t-shirt and jeans and, like, flip-flops, I think," say Kate Pahula, who lives in Colorado.

"Now it's snowing sideways and 30 degrees, but I think this is great, I love it," her husband Tim adds, before Kate co-signs, "It makes it more fun."

Up here, the GMC trucks that shuttle guests back and forth around town are gone. The snowcat is the only means of mass transit. Taking one, to make it up the final hill before reaching the destination, would mean waiting in a line, though. So the three-minute walk is clearly the easier choice.

Once you reach the Mountain Top Picnic, you're handed a glass upon showing your ticket, and the wine finds you before you can find it. Volunteers carrying multiple bottles are more than happy to fill your cup, the same way your half-full mimosa would at a bottomless brunch.

Asked what separates this tasting from others, the event's executive director, Angela Mueller, cites two things: intimacy and portions.

"The first thing [to know] for Taste of Vail, for any of our events, is that the winemaker or the wine owner are the ones that pour the wine. Most events, you have a distributor or someone else," Mueller tells Elite Daily. "The second thing is we have food — not just a little bit of food at each event. We have a tasting that's quite large, for everything."

By Mueller's count, there are 58 wineries and 14 restaurants showcased at the Taste of Vail's 2018 event, and her comment about the portions are far from a baseless brag. Gather the stamina to eat, while trying all the different types of wine, and you'll leave satisfied (I'd recommend the lemon ricotta pancakes with huckleberry sauce and bourbon maple syrup, served by Beano's Cabin at Beaver Creek). On more than one occasion, a person promises that the food on display is the crème de la crème.

"This is the epitome of some of the restaurants in town," Greg Samson, who says he's lived in Vail for nearly four decades, tells Elite Daily. His recommendation is the pheasant chowder served by Two Elk Restaurant.

The scene is as fraternal as Mueller indicates, too. Friendliness is the norm here — more than one local has casually insisted that people are just happier in the mountains — but it jumps to another level after a few drinks.

The high fives, pats on the back, and requests for cheers become more frequent within the lively tent that shields the wines from the snow at this year's event. If you're nice enough, some might take off their gloves to shake your hand or lift their ski goggles for conversation — or make a joke at your expense.

"You can look around, no offense, and you can see exactly who lives in the mountains and who doesn't," Kate says, before pointing downwards. "Like, those jeans, that's not gonna work. You're freezing."

By the end of it all, between the array of wine — the rosé, the cabernet, the chardonnay, all of it — the unique setting, and the food from top restaurants in town, the Mountain Top Tasting in Vail proved why it's earned plaudits from the likes of USA Today and Forbes.

"This event, we push it to the limit so people can really try and experience what Vail has to offer," Mueller says.