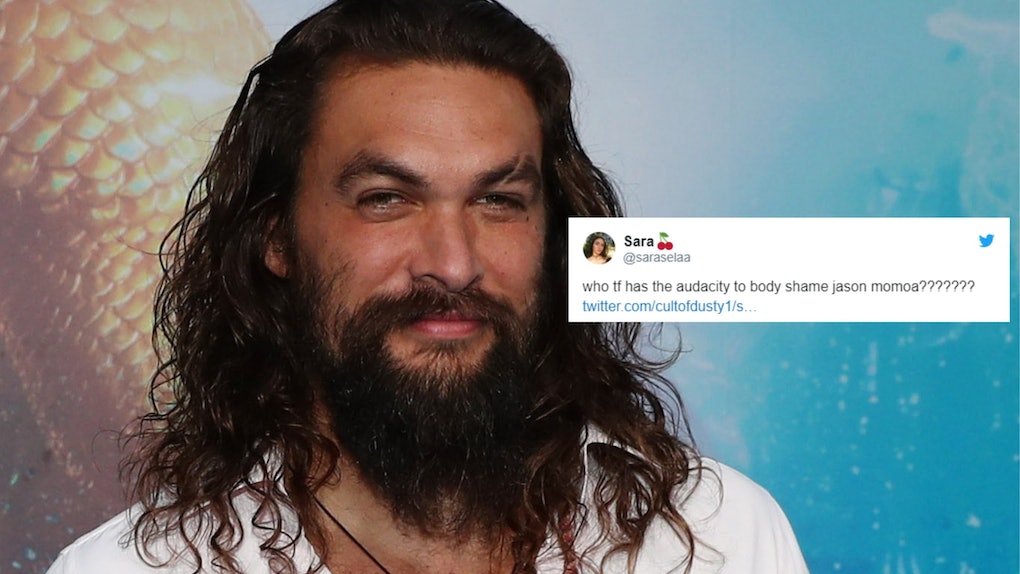 Nope, you're not reading the headline wrong, people are body-shaming Jason Momoa. When I first heard about it, my instant reaction was, "Really? Are you guys serious?" First of all, no one, and I mean no one should be body-shamed, but for Aquaman himself to be judged for his body? Is anyone safe from being body-shamed? I mean, that guy has been on the cover of Men's Health countless times and, and, well... he's Aquaman! The King of Atlantis! Honestly, the role couldn't have been more perfectly cast. Basically, what I'm trying to get at here is that the tweets body-shaming Jason Mamoa are totally ridiculous. So what if he's looking a bit different now? Having a rock hard, impossibly defined six-pack every day of the year is highly unrealistic.

According to Just Jared, Momoa has been on vacation with Lisa Bonet in Italy this summer. So, like any other normal human, Momoa spent his free time at the pool shirtless. Once photos of Momoa shirtless surfaced online, trolls felt the need to point out how his physical appearance had changed, calling him "fat" and saying he had a "dad bod." Upon inspection, by "fat" and "dad bod," they mean Momoa was ridiculously buff... just with less defined abs. One fan of Momoa's screenshotted a few of the hurtful comments, which included things like, "Someone needs to start lifting again," "Been working on his Dad Belly," and "Omg his stomach."

Seriously. What kind of world is it when no one can show off a little skin without being body-shamed? I mean, it's summer for crying out loud! People are going to go shirtless and wear their bikinis because — guess what — it's hot out and people want to be comfortable. So if Jason Momoa wants to walk around without a shirt, he should be able to without getting judged. Besides, Momoa was on vacation, not promoting a movie or a television show. He was on vacation with his family, so people should be minding their own business anyway.

While some people left rude comments about the pictures, others defended Momoa and his appearance, citing how he was healthy and *newsflash* in really good shape. Some people even wished they could look like a fraction of how Momoa does in the photos.

"Jason Mamoa is getting body shamed on the internet today for this picture of him on vacation bc he’s 'fat now' and has a 'dad bod'... and I’m officially never taking my shirt off ever again as long as I live. Not even in the shower," one user named Dusty Smith said.

HERE'S WHAT MORE FANS HAD TO SAY TO TROLLS BODY-SHAMING JASON MOMOA:

Thankfully, there are still some nice people in the world because as the internet has shown me, there are so many trolls on here that just love to hate on literally anybody and anything, including Jason Momoa! I'm sure he remains unbothered, though, since he is Aquaman, after all. But the hateful comments towards Momoa show that body-shaming can happen to anyone and any gender. It sucks and people should honestly stop and let people live their lives in peace.

More like this
Kaitlyn Bristowe & Jason Tartick Are Engaged & Their Proposal Story Is Cute AF
By Rachel Varina
These Tweets About Amy Adams' 'Woman In The Window' Are Brutal
By Abby Monteil
These Tweets About Beyoncé On Netflix's 'Selena: The Series' Are Too Much
By Dylan Kickham
Stay up to date