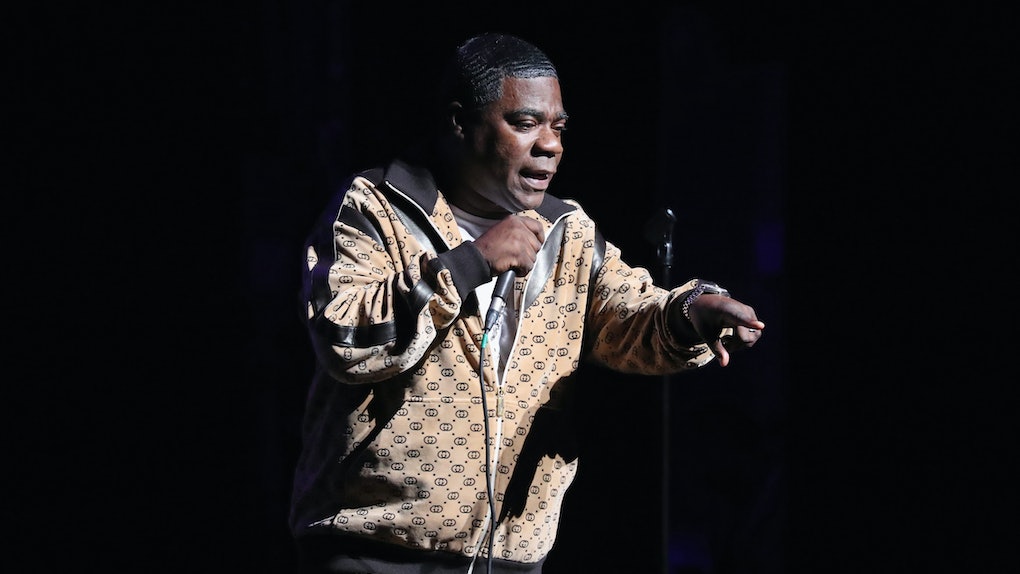 As the Screen Actors Guild Awards kicked things off on Sunday, Jan. 27, comedian Tracy Morgan infused some of his trademark humor into his presenting duties with a few blunders and one joke that somehow made light of a near-death experience, all while announcing the nominees for Outstanding Performance by an Ensemble in a Comedy Series. The internet had some ~feelings~ about the gaffes, and the tweets about Tracy Morgan's SAG Award presentation are comparing him to Elizabeth Taylor while laughing at his Walmart shade for a few hilarious reasons.

Moments before the cast of Amazon's award season darling, The Marvelous Mrs. Maisel, took to the stage to accept the award for best ensemble in a comedy series, Tracy Morgan put on a show of his own and gave the audience a preview of his comedic chops, along with a few unintentional slip-ups. TBH, he only had a few minutes to make it happen, but the funnyman somehow managed to fit in a quip about getting hit by a truck — in addition to almost revealing the winner of the category early and managing to mispronounce the name "Maisel" — during the short period of time he was on stage.

Here's how it all went down: Morgan first addressed the audience and deadpanned, "It’s an honor to present this award tonight. It’s a very prestigious award and can be life-changing. And, trust me, if you win this award tonight and get hit by a Walmart truck and survive with all your arms and legs, you’re going to be set for life."

ICYMI, Morgan is referring to a 2014 accident in which a former Walmart truck driver hit his limo, seriously injuring the comedian and killing another passenger. It was a pretty dark reference that threw all the shade at Walmart, and the Twitterverse is having a meltdown over the unexpected comment.

After spilling all the tea on Walmart, Morgan then nonchalantly opened the envelope with the winner's name before the nominees were even announced, and Twitter was quick to go in on the flub. A few viewers compared the gaffe to that of Elizabeth Taylor, who famously botched the presentation of the best motion picture drama award at the 2010 Golden Globe Awards. Luckily, Dick Clark swooped in to save the day, and the actress got things back on track when she jokingly announced, "And the winner is ... it's flashing 'envelope.'"

Last but not least, Morgan's final mistake happened when he finally announced the recipient of the award. The comedian revealed that the SAG award was going to the cast of The Marvelous Mrs. "Maivel," not "Maisel," and viewers have a few different theories about the reason behind the blunder.

The jury is still out on whether Morgan decided to get a little lit before his hosting duties or if he genuinely has never heard of The Marvelous Mrs. Maisel. There's also the far more likely explanation that it could be a combination of both.

Either way, he's starting off the show on a hilarious note. Could he be the Oscars host we never knew we needed? I'm staying tuned.

More like this
These Tweets About Jimmy Fallon's TikTok Dance Follow-Up Segment All Say It's Too Little, Too Late
By Brandy Robidoux
These Tweets About Prince Philip's Death Will Break Royal Fans' Hearts
By Jonathan Borge
Simu Liu's Tweets About The 'Kim's Convenience' Finale Promise "Tea & Receipts"
By Dylan Kickham
Stay up to date