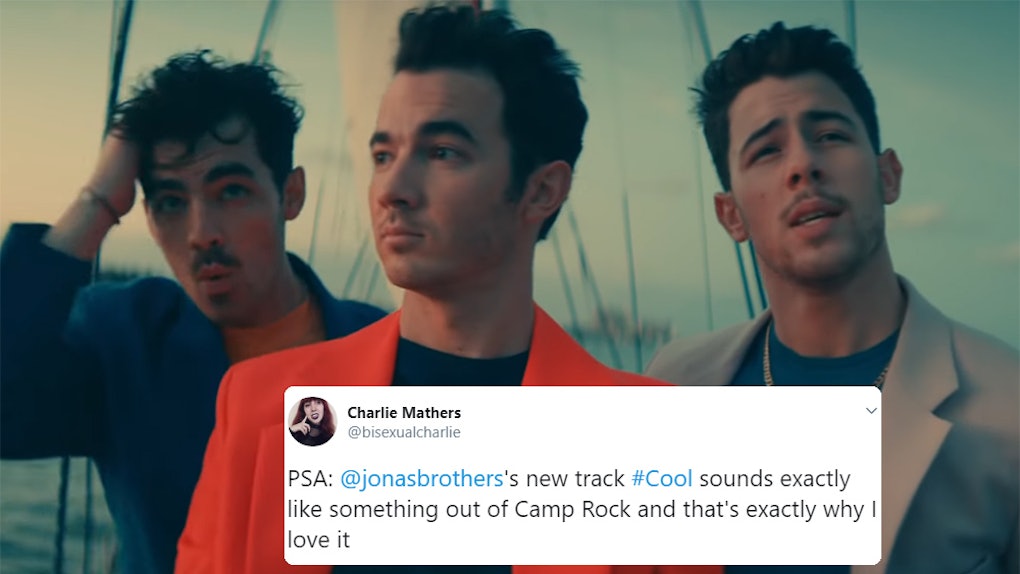 You’ve probably heard by now that the Jonas Brothers just released a new single called “Cool” and that fans are loving every single second of it. Well, they’re taking to Twitter to express just how much they love it. The tweets about the Jonas Brothers’ “Cool” are all super enthusiastic and totally digging the song's many throwback references to the JoBros' Disney Channel days!

The Jonas Brothers dropped the single on Friday, April 5, and almost immediately, fans were hopping on social media just to share their thoughts. “Cool” is a great mix of fun and lightheartedness that’s perfect for this time of year. I mean, summer is literally right around the corner, so the Jonas Brothers are just getting a head start on it.

Even their announcement of the song on Instagram was full of fun, summery imagery. The guys shared a photo of themselves in bright colored, button-down shirts and sunglasses when they announced the song. So, the summery theme is strong when it comes to this song!

“🆒 drops Friday! Pre-save the song at JonasBrothers.com to hear it first 🌴😎,” they wrote in the caption of the post.

Obviously, the palm tree and sunglasses emojis aren’t there for no reason. The Jonas Brothers want to make sure you know just how cool this new single is.

If you haven’t heard “Cool” yet, here’s a look at some of the lyrics:

So, there’s a lot of fun to be had with this song and fans are genuinely enjoying it. Here’s what fans are saying about “Cool” on Twitter right now:

Some fans couldn't help but notice that the song has a major Camp Rock, throwback vibe.

They also couldn't stop raving about the subtle "Burnin' Up" reference the boys slipped into the lyrics.

Speaking of that red dress reference, the "Cool" music video is chock full of old school Jonas Brothers references, and it's just from the look, vibe, and feel of the video. It has a three-act structure where all the boys get up to hilarious shenanigans on their own, which totally feels straight out of "Burnin' Up." Then there's the whole fact that part of the video takes place on a beach resort and during a boat ride... aka, total "Lovebug" vibes.

Check out the video below:

All the Jonas Brothers fans out there are obviously excited that their favorite boy band is back together and producing some incredible music once again. I have to admit, I’m excited, too! Hopefully "Cool" and their last single "Sucker" are just the beginning of some great music yet to come. I have a feeling the Jonas Brothers have way more up their sleeves than they're letting on!