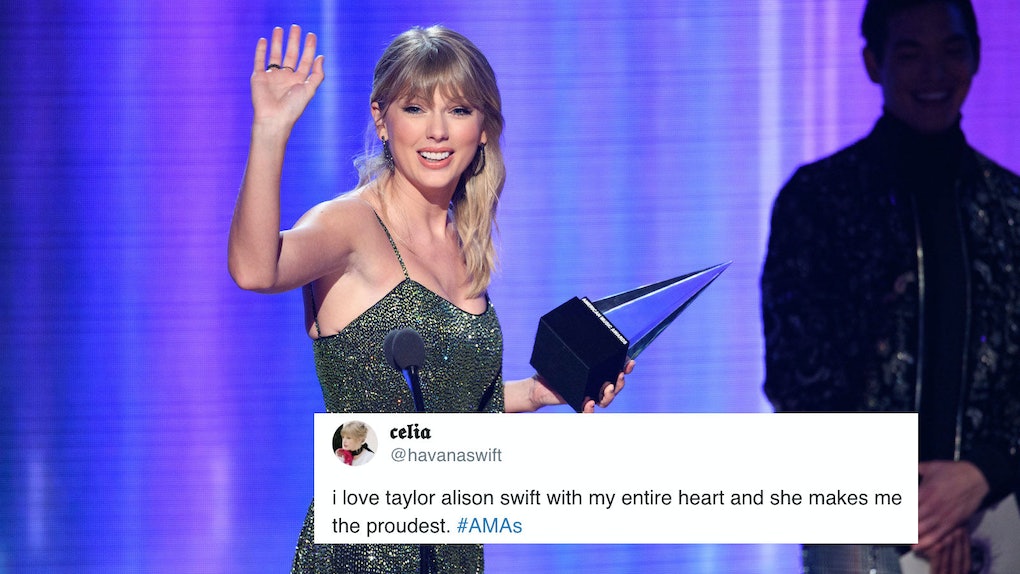 The Tweets About Taylor Swift's 2019 AMAs Speech Will Have You Crying, Just Like Her Mom

Even though Taylor Swift is a staple at music awards shows, her appearance at the 2019 American Music Awards really had everyone on the edges of their seats. Along with being up for five awards, Swift was honored with the Artist of the Decade trophy, and considering all of the public drama that had been going on surrounding Swift's use of her old music at the show, viewers could not wait to hear her acceptance speech. These tweets about Taylor Swift's 2019 AMAs speech show just how much the Swifties connected with the powerful message.

After taking to the stage with a show-stopping medley of hits throughout her career, Swift accepted the Artist of the Decade Award from Carole King. She used her speech to state how important King has been in inspiring her career, which included a teary shot of Swift's parents in the crowd. Swift went on to underline that like every artist, she has longed to create something that lasts, and celebrated that the decade-long honor highlighted so many moments she had shared with fans throughout the years.

Of course, Swifties took to Twitter immediately after Swift's speech to react to the sweet message from the superstar. Check out the speech for yourself below along with some of the best reactions to it from fans:

Prior to accepting the Artist of the Decade Award, Swift had already taken the stage earlier during Sunday night's award show to accept the Favorite Pop/Rock Album trophy for Lover. During that speech, Swift threw a bit of shade at her label drama with Big Machine Records by saying: "This album really felt like a new beginning and I really love my label Universal and Republic. Thank you for being so generous to me and allowing me to make whatever music I want to make." The comment was a side-eye to former label Big Machine, whom Swift claimed had prohibited her from performing her old songs at the AMAs.

Swift was awarded the Artist of the Decade award after performing a medley of her hits on the big stage. This performance had become a source of intense public scrutiny for weeks before the AMAs even happened, as Swift posted a note on Nov. 14 alleging that her former label Big Machine Records and manager Scooter Braun were barring her from performing any of her songs released prior to her recent Lover album at the show. Big Machine denied Swift's allegations with a statement of their own. That led to a response from Swift's publicist Tree Paine, who reaffirmed Swift's claims about how Big Machine had prohibited her from performing her older music at the AMAs. After that whole back-and-forth, Big Machine released a statement on Nov. 18 saying the label had reached a licensing agreement with AMAs producer Dick Clark Productions.

Phew... did you follow all of that? The gist of it is that nobody was sure whether Swift would be able to perform all of her biggest hits during her AMAs medley, but in the end, Swift was able to bring songs from her whole discography to the stage.

While this label issue was definitely the biggest thing on fans' minds concerning Swift at the AMAs this year, she was also set up to have a huge night apart from her much-hyped medley. Swift scored five nominations at the 2019 award show, including two of the biggest categories: Artist of the Year and Favorite Music Video for "You Need to Calm Down." The five noms placed her as the fourth most-nominated artist at the AMAs this year, after Post Malone with seven and Ariana Grande and Billie Eilish each with six.

But of course, Swift's big win was taking home that Artist of the Decade honor, an award that has only ever been given to Garth Brooks prior to Swift taking it home. So after all that drama leading up to the AMAs, it seems like Swift came out on top once again.