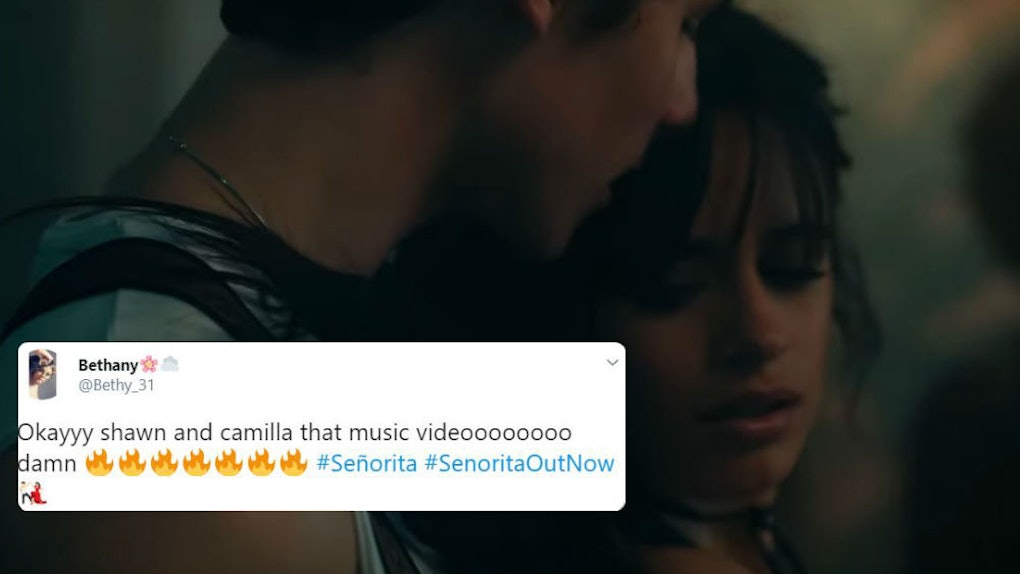 Shamila is coming for us all. And I am ready for it! The dynamic pop duo teased a new collaboration earlier this week, promising fans a steamy AF music video in each of the teasers posted to their respective socials. And now, Shamila's newest collab, "Señorita," has arrived, and the tweets about Shawn Mendes and Camila Cabello's "Señorita" music video make clear that fans are sweating like a bunch of sinners in church. And they're definitely not going to stop shipping Cabello and Mendes together anytime soon.

The song was originally teased on June 19 in both Instagram and Twitter videos posted to the two stars' accounts. Can I just say how thankful I am to all of the artists who have stopped making us wait forever for songs and videos to drop? Like, they just teased this video one day ago, and it's already here. The efficiency!

In addition to the fanfare over the teasers, links for pre-saving/purchasing the single were made available the same day, with a ShawnCamila.com website popping up. On the site, the single is available for purchase via CD, vinyl, and a specially-packaged CD accompanied by a digital download of the track. While both of their videos showed different clips from the music video, neither of them stated whose song this exactly is. Was it going to be a Mendes track that Cabello is featured on, or vice versa? Or would it just be both their song like in the case of their other epic collab, "I Know What You Did Last Summer?"

It seems like they're keeping the equal-billing train going, because they're both listed as main artists on the track.

The teasers for the "Señorita" music video were steamy.

And kiss. They. Did. Ladies and germs, I give thee, Shawn Mendes and Camila Cabello's "Señorita" music video.

Be still, my beating heart. This is, quite literally, my idea of pansexual heaven. And it was released during Pride month?! A gift, this is. If I wasn't shipping these two before this music video, I sure as hell am now. Shamila forever.

The video shows Cabello as a waitress in a diner, and Mendes as a brooding customer. Turns out, their characters are a thing. Mendes spends the whole video pining for Cabello (same), and Cabello spends the whole video staring at him as if he was naked (also same). It wouldn't be a true Cabello video if there weren't some dancing, though. And trust, they deliver.

Fans on Twitter can't get over the music video, either. And why should they?!

These two are pandering to the people who ship them (there's even a line about calling each other friends even though "friends don't know how you taste" *intensely side-eyeing*). Not only is the pandering working... it is welcomed.

The last time Mendes and Cabello collaborated on a track together was the bop "I Know What You Did Last Summer." (Side note: Because of these two, I can't say that line without saying, "Tell me where you've been" in my head right after. The power they have.)

More like this
Olivia Rodrigo's Reaction To Getting Her First Parking Ticket Was Priceless
By Brandy Robidoux
Is Taylor Swift's "Mr. Perfectly Fine" About Joe Jonas? Sophie Turner's Instagram Has Fans Curious
By Brandy Robidoux
Are BTS & Coldplay Collaborating On A Song? Here's Why Fans Think It's Happening
By Michele Mendez
Stay up to date