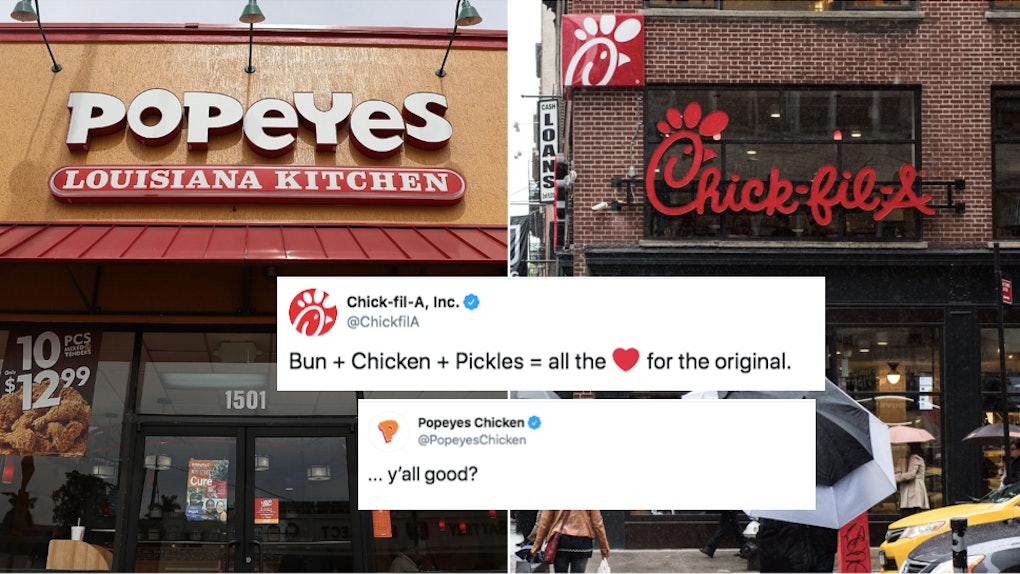 The Tweets About Popeyes' Chicken Sandwich Vs. Chick-Fil-A Are Fueling A Debate

With so many new menu items at fast food chains being released throughout the year, it's hard to make a decision of where to go when heading out to a restaurant for dinner. Since there are so many options and so little time, it's important to carefully weigh the decision to pick the ideal fast food establishment to eat at. To whittle down my list, I usually consider the cost of menu items, the taste of the food, and convenience of the restaurant. Judging from the tweets about Popeyes' Chicken Sandwich versus Chick-fil-A, I'm not the only one that considers the differences between fast food chains a topic of grave importance. The debate over Popeyes versus Chick-Fil-A has got me seriously torn between two sides.

The internet feud between Popeyes and their competitor Chick-Fil-A started on Monday, Aug. 19. Chick-Fil-A posted the tweet: "Bun + Chicken + Pickles = all the (heart emoji) for the original," to which Popeyes simply replied "...y'all good?" The tweet comes fresh off the release of Popeyes' new Chicken Sandwich on Aug. 12, so naturally the social media stab has inspired renewed conversation about which meaty company ultimately reigns supreme.

I have to say, Popeyes' new Chicken Sandwich sounds pretty awesome. According to an Aug. 8 press release, the sandwich is the "biggest product launch in 30 years," and it "includes a delicious buttermilk battered and hand breaded white meat chicken filet, served on a buttery, toasted brioche bun with two barrel cured pickles and guests' choice of classic mayo or spicy Cajun spread." It's apparently the first chicken sandwich to be on Popeyes menus nationwide.

Chick-fil-A, on the other hand, has a well-known sandwich that comes on a toasted and buttered bun with dill pickle chips. The original Chick-fil-A Chicken Sandwich debuted in 1964 with an original recipe that has captured hearts nationwide. You really can't argue with history — Chick-fil-A's sandwich is a time-tested delight for carnivore lovers.

With such a close tie between Popeyes' new Chicken Sandwich and Chick-fil-A's Original Chicken Sandwich, the Twitterverse definitely had something to say about the issue. The Twitter thread between Popeyes' and Chick-fil-A had people chiming in with differing opinions and a side of hot sauce. Loyal fans of Chick-fil-A immediately stepped up to back up the fast food chain in the debate. Check out their heated tweets.

Even though Chick-fil-A has the claim on the Original Chicken Sandwich, there were still many people backing up Popeyes' new menu item.

It looks like this food war has the internet on divided lines. With such differing reviews of the fast food chains, there's no clear cut winner this time. IMO, the best way to select the king of sandwiches? It's to keep an open mind and try both Popeyes' new Chicken Sandwich and Chick-fil-A's Original Chicken Sandwich to see for yourself which menu item inspires you. You may be pleasantly surprised to find that both fast food chains have something unique to offer.