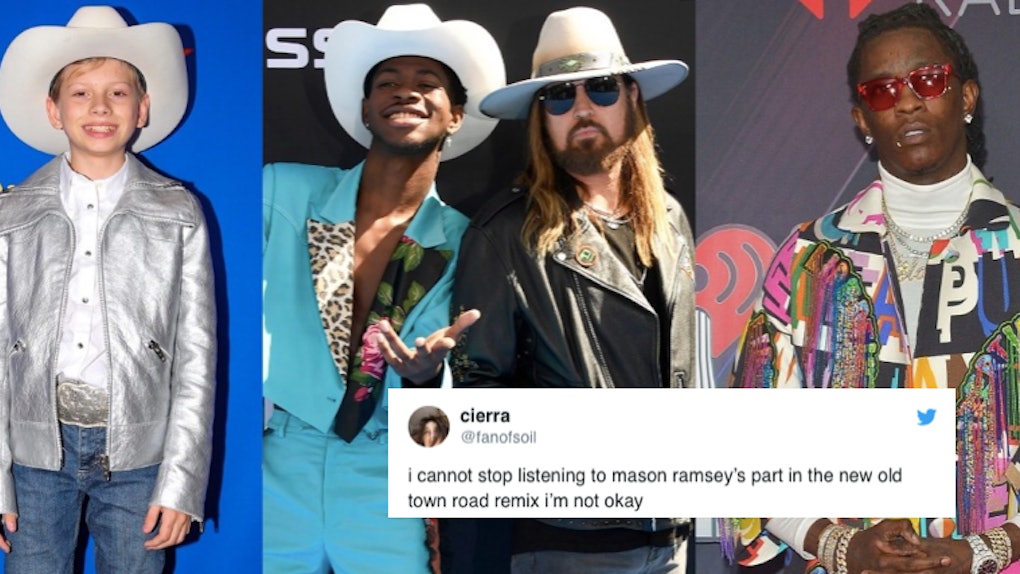 You're not sick of "Old Town Road" yet, are you? Good. Because not only is it still the No. 1 song in the country, but Lil Nas X just released another new remix of the hit tune, and this one features guest verses from Young Thug (who brings a hip hop vibe) and Mason Ramsey (yup, the Yodeling Kid). The release follows the earlier, radio-ready Billy Ray Cyrus remix (and yes, Cyrus is still on this track, too). So, I gotta ask: Did we really need another version of "OTR"? Or was Nas just, uh, beating a dead horse here. Judging from the tweets about Lil Nas X's second "Old Town Road" remix, the song is about to be more popular than ever, and it's all thanks to a 12-year-old who gained viral internet fame after yodeling Hank Williams' "Lovesick Blues" at a Walmart.

So yeah, it looks like the "Old Town Road" horse is still riding. Don't @ me, OK? So giddee-up or gidee-out my way.

In case you haven't been keeping up with "Old Town" history, lemme get you up to speed. See, the original OG track's recently been at No. 1 on the Billboard Hot 100 for 14 consecutive weeks and just earned Diamond status. Then there's the music video, which features both Nas and Cyrus, and has racked up more than 200 million views since it first dropped back in May. Not too shabby.

So do we think the new remix can top it?

Let's saddle up and take a listen to it, shall we? Oh, you believed me before when I said I was done with the puns? Sorry, but I'm gonna ride this thing 'til I can't no more.

I don't know about y'all, but I am so here for all of this. I mean, Lil Nas X, Billy Ray Cyrus, Mason Ramsey, and Young Thug on the same song is legit the collab I never knew I needed. Thug brings the hip hop vibes, Cyrus is still rapping about diamond rings and Fendi sports bras, and Ramsey goes hard with his "Yippee-O-Ki-Ay!"

Speaking of which, Twitter is straight-up loving the little yodeler. Check out some of these tweets:

Ramsey's verse — in addition to the instantly iconic "if you ain't got no giddee up then giddee out my way" — features the following line:

Hop up in my Razor, got a thousand acres/Ride up on the cows with it, pray that it don't faze her.

S'cute, right? I mean, #TBT to riding around on a Razor scooter back in middle school. Kinda makes me wish I still had mine, y'know?

But I'm also loving Thug's new verse, which definitely has a little more edge to it:

I’m take a horse to the Southberry Road/I don’t remember her name, but I painted on her nose. Country money, I don’t gotta do no chores/I’m a menace, I got women tryna sneak me through their doors.

The whole vibe they've got going on here just works for me. To be honest, I don't care if we ever get any new songs again. As long as we keep getting cool, new remixes of "Old Town Road," I'm good.