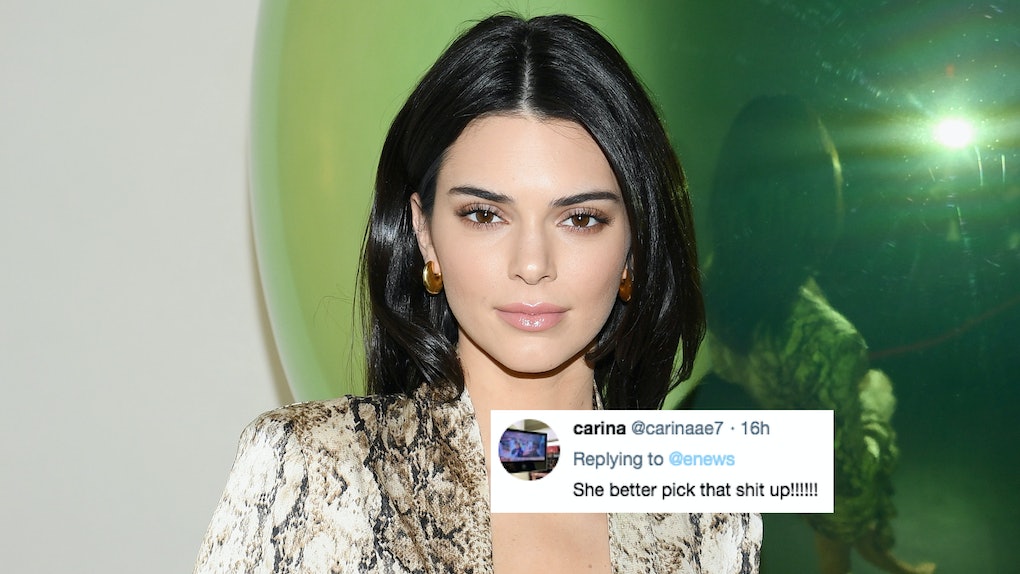 The internet is pissed at Kendall Jenner... again. The model was deemed one of the winners of the Bottle Cap Challenge when she posted a video of her kicking the cap off of a bottle while riding on a jet ski in front of a yacht, but now, the tweets about Kendall Jenner's Bottle Cap Challenge are calling her out for one specific detail in the video: the bottle cap itself.

Here's the tea. While Jenner is getting a lot of praise for the video (which is truly a feat of balance), people are also tweeting about Jenner's perceived lack of care for the ocean. Being in a body of water when she filmed the video, it looked like the bottle cap she kicked from the glass bottle was kicked into the ocean, adding just one more thing to the pollution list. The video doesn't show Jenner retrieving the bottle cap, so lots of people are assuming that the Keeping Up With The Kardashians star carelessly let the cap stay in the water.

You can check out the original video below:

People really aren't pleased with or impressed by this video. All they can think about is the cap and whether it was left in the water, which is fair.

Some of the comments were a bit intense, like the one where she's called a "stupid b*tch," but the overall sentiment is that it was careless and irresponsible for Jenner to kick the cap into the water.

Jenner did get the cap, though. While her sisters and lots of other celebrities were busy commenting on how epic her video is, she posted another comment into the comments thread saying "cap recovered" with the kissing face emoji.

One Twitter user called out Jenner for littering, tagging @4oceanBracelets (an organization committed to ocean cleanup) in their tweet.

"POLLUTION @KendallJenner," the Twitter user said. "Show us how you can use your platform to support organizations like @4oceanBracelets!!!"

"In her defense she was the first to say she recovered the bottle cap, but yes let’s keep plastic out of the ocean," the tweet said. It's not clear if Jenner posted that "cap recovered" comment before or after the backlash on Twitter.

Honestly, this backlash is a little intense given the circumstances. Yes, our oceans are heavily polluted and it's a crisis that doesn't need anything added to it. But Jenner made note to her followers that she didn't just leave the cap chilling there for a turtle to ingest. The anger pointed at her in response is a bit much. The tweets saying she shouldn't have polluted are all well and fine, but the "stupid b*tch" comment and others similar to it are just a lot.

Honestly, these "Kendall Jenner is worsening the pollution crisis" takes are pretty myopic. It's not like Jenner was saying, "HA! Take that, ocean!" As long as she pulled the cap out of the water (which she says she did), then this really isn't an issue. And the video doesn't explicitly show the cap falling into the water, either. It could have very well fallen onto the boat the person holding the bottle was on. Based on Jenner's comment, it seems like it did fall into the ocean. Maybe people are angry at the idea that she may have not been able to recover it if it sunk to the bottom to quickly? Still, no need to bully in her comments section because... she did get it out. So, let's give Jenner a break.