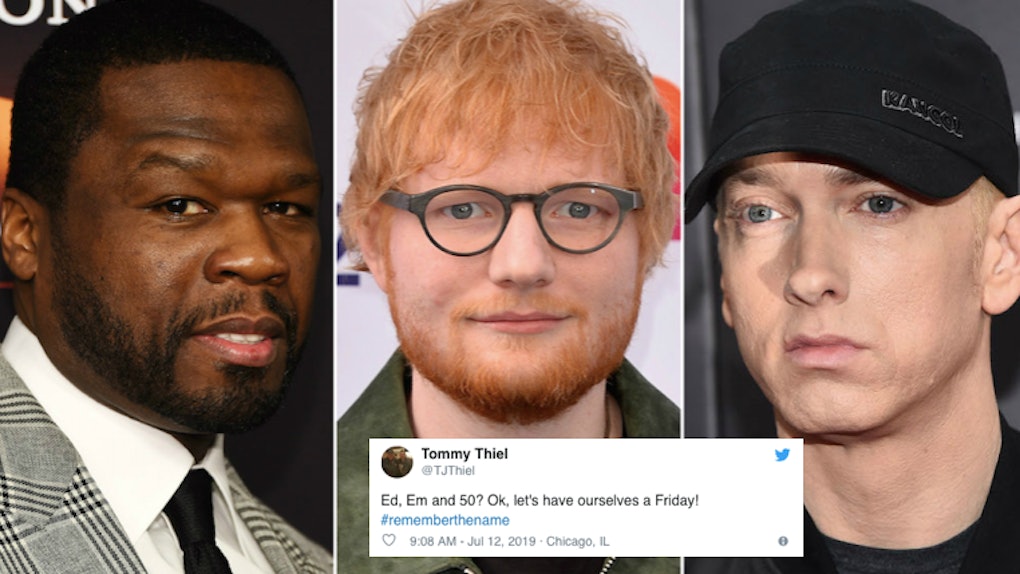 The Tweets About Ed Sheeran, Eminem, & 50 Cent's "Remember the Name" All Say 1 Thing

Ed Sheeran's new album is here. I repeat, Ed Sheeran's new album is here! And it features a cameo from a different artist on every track. From Justin Bieber, Camila Cabello, Cardi B, and Khalid to Travis Scott, Chris Stapleton, Bruno Mars, and Ella Mai, the album is filled with bops, not the least of which being "Remember The Name" featuring 50 Cent and Eminem. This jam is straight fire, you guys. And if the tweets about Ed Sheeran, Eminem, and 50 Cent's "Remember The Name" are any indication of the song's popularity, this tune has pretty much already solidified itself as a certified summer jam. Not only is the song itself amazing, but Sheeran's verse is dope and he totally holds his own next to the two rap legends.

"Remember The Name" was immediately eye-grabbing when Sheeran dropped the tracklist back in May. Sure, the album, titled No. 6 Collaborations Project, has an impressive enough list of modern music stars. But throwing iconic rappers Eminem and 50 Cent into the mix was legit pure gold!

In case you haven't heard about this super cool yet, here's a little background info for ya: No. 6 Collaborations Project is part of Sheeran’s collaborations EP series, which left off at No. 5 back in 2011.

"Since then, I’ve always wanted to do another," he announced on Instagram back in late May. "So I started No. 6 on my laptop when I was on tour last year. I’m a huge fan of all the artists I’ve collaborated with and it’s been a lot of fun to make."

There are 15 songs on the album, and seven of them include features from two different artists.

Now that the full album has dropped and we finally have the rest of the songs, it's clear that "Remember The Name" is quickly becoming a fan favorite.

Just take a look at some of these tweets:

If you haven't heard "Remember The Name" yet, you are def in for a treat.

Check out the full song in the lyric video here:

It's so good, right? Now we just have to wait for the actual music video to drop. Can you even imagine how amazing it's gonna be?

With the "Beautiful People" music video, a normal couple is placed in the middle of a bunch of L.A. crowds, aka trendy, Kardashian-like "beautiful people." Sheeran and Khalid were two of those beautiful people strewn throughout the video's scenes. Sheeran and Bieber were (intentionally) poorly animated into a bunch of different scenes, letting the animation take the main stage. And the "Blow" music video featured an all-female rock band playing Sheeran, Mars, and Stapleton. The three singers are heard, but not seen in the video. It's a pretty cool concept that makes things more about the music and less about the people performing it.

We still don't know what the concept for the "Remember The Name" music video is gonna be, but it's clear that fans are living for the song.