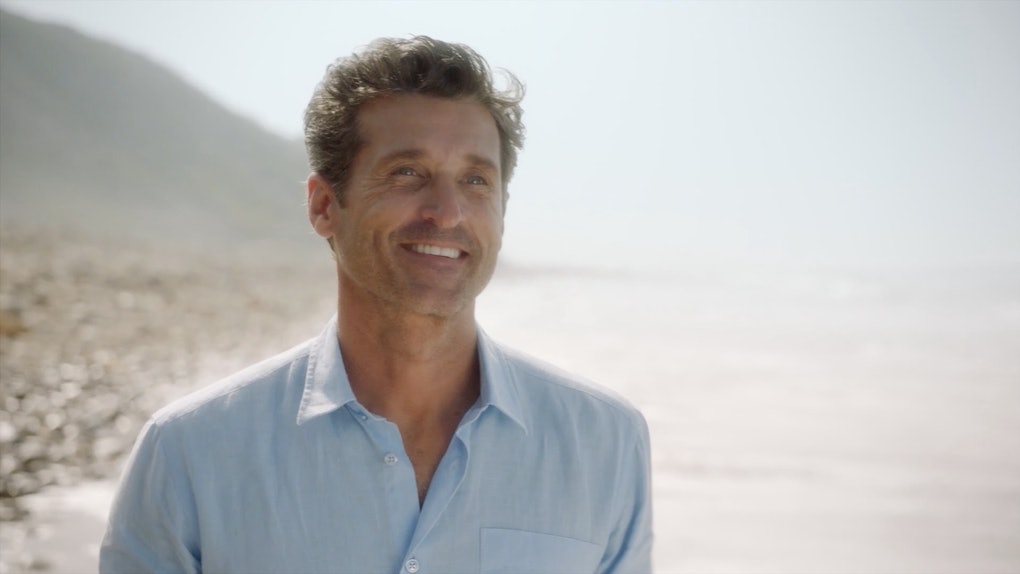 Warning: Spoilers for Grey's Anatomy's Season 17 premiere follow. It's a beautiful day to save lives... and apparently bring them back from the dead, too. OK fine, the good doctors at Grey Sloan Memorial Hospital still can't quite perform that kind of miracle, but Grey's Anatomy just did the next best thing by bringing back McDreamy in, fittingly, a dream sequence. The second fans saw Derek Shepherd's return to Grey's Anatomy, the tweets about Season 17's premiere episode went from "OMG" to "Somebody sedate me!"

The Grey's Anatomy Season 17 premiere was a wild ride from start to finish. Kicking off at 8 p.m. ET in a crossover episode with Station 19, the show then continued into its 9 p.m. ET time slot with another full two hours of all-Grey's storylines. Fans were prepared in advance for the start of the season to fast-forward to the beginning of the coronavirus pandemic, but the effects the all-too-real plot had on the characters were tough to watch — especially for Meredith fans.

While most of the characters also had side stories that gave viewers a respite from the tragedy of the virus — Jo and Jackson's friendship hookup, Teddy dealing with the aftermath of her cheating on Owen with Tom — Meredith was pretty much all COVID, all the time... except at the very, very end of the three-hour premiere, when she unexpectedly reconnected with the love of her life.

After pulling way too many sleepless, stressful hours caring for coronavirus patients, Meredith was finally going home to rest. However, just as the episode was wrapping up, Dr. Cormac "McWidow" Hayes spotted Meredith in the parking lot in a crumpled, unconscious state on the ground. The show then flashed to a dream sequence of Meredith standing on a beautiful beach. She looked around, dazed, and saw a man smiling and waving at her. Upon closer look, Meredith (and screaming fans at home) realized it was Meredith's late husband, Dr. Derek "McDreamy" Shepherd.

As the two gazed at each other, Twitter erupted.

But while this reunion was a lot of good things (Beautiful! Wholesome! Moving!), it also has fans wondering what, exactly, it means for Meredith. The dream was the result of her collapsing on the ground, so that can't be good. Was she just tired and overworked, or was it a sign of something more serious?

Unfortunately, the promo for the Nov. 19 episode leads fans to believe it's the latter. A clip previewing the next episode shows Meredith getting tests, which is an indication she's facing a medical situation. However, the promo also teases more MerDer on the beach, so at least there's a silver lining to whatever storm the Grey's Anatomy writers are brewing.

Fans will have to wait and see what happens when Grey's Anatomy continues on Thursday, Nov. 19 at 9 p.m. ET on ABC.