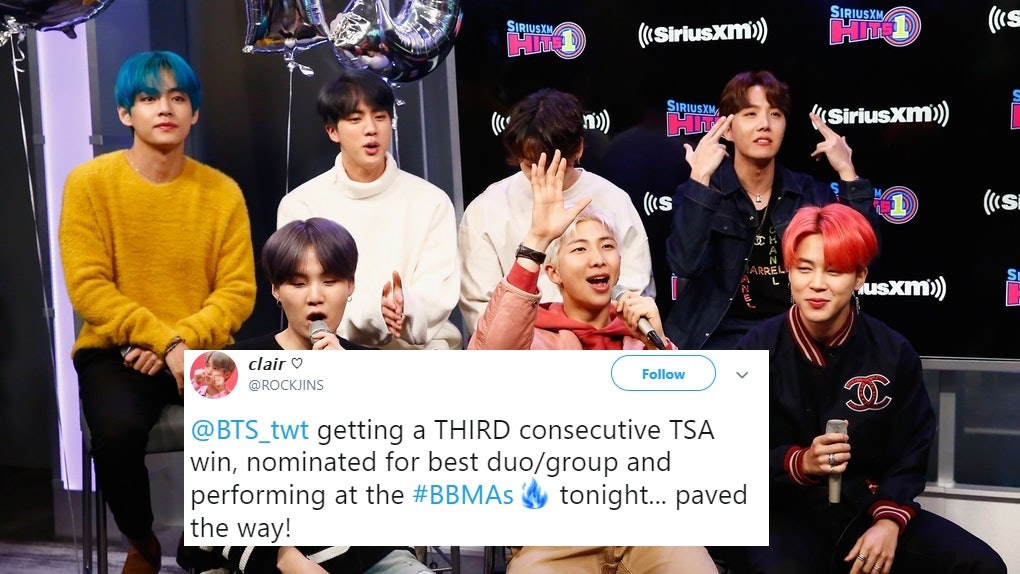 The Tweets About BTS' Top Social Artist Win Are A Mood, Because They Just Made More History

BTS has quite literally taken over the Billboard Music Awards over the past few years. And this year, they're back at it once again. The boys were up for the Top Social Artist award, which many fans thought they totally had in the bag. Because, well, the BTS’ fan base is so huge and enthusiastic that they’d do anything to win the boys this award. Fortunately, they were right this year. And they’re talking nonstop about it on social media. All the tweets about BTS’ Top Social Artist win are super emotional. Not that you’d expect anything else from ARMYs.

It goes without saying that ARMYs are pretty passionate fans, and that usually means they go above and beyond for BTS. They certainly did that for the boys this year, and especially for this award. Not only did they vote like mad to make sure the boys won, but they were promoting the heck out of the category ever since it was announced. So, ARMYs worked their butts off to make this happen.

Needless to say, they were pretty happy that the boys did win. And, as expected, they're letting all their emotions out on social media. There's no containing their emotions whatsoever, which is pretty much always the case when it comes to ARMYs. Here’s what the BTS ARMY is saying on Twitter right now:

Clearly, everyone has a lot to say about their win of the Top Social Artist category. But there’s plenty more to talk about when it comes to the BBMAs. BTS is also nominated for the Best Group award. Plus, they’re performing again this year and this time, Halsey will be joining them. They’ll, of course, be performing their mega hit “Boy With Luv,” which will probably have ARMYs screaming their heads off. It’s going to be wild for sure, and everyone can’t wait to see it!

Billboard also reported that BTS was the very first K-pop act to reach the top spot on the Artist 100 chart for the third time. And they did it in just under a year. The first time this happened was in June 2018, then again in September 2018, and then in April 2019. So, this is a very interesting time for BTS and I’m sure they’re totally basking in all the success. And it’s all thanks to ARMYs around the world who are making such a huge comeback for the boys possible. Amazing!