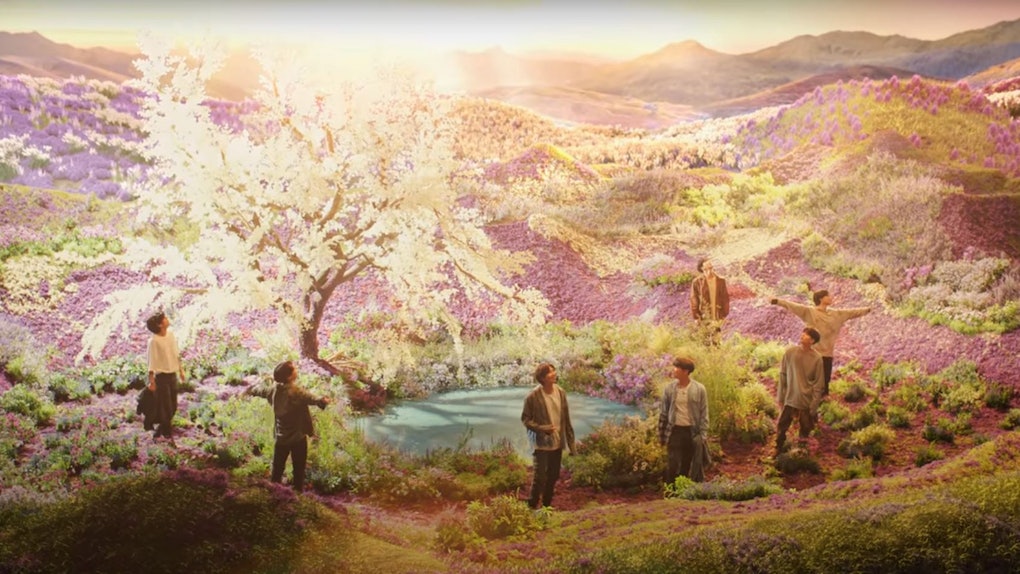 Ever since BTS dropped their new Japanese single "Stay Gold" on June 19, fans have been wondering when they'd get to see the music video for the inspirational track. The group dropped the video as a surprise for fans on Friday, June 26, and it's literally right out of a dream. These tweets about BTS' "Stay Gold" music video capture how much ARMYs are digging the video's message.

The song's lyrics are about staying positive even when times get tough, so fans had a feeling the video was going to be an uplifting one. The four-minute clip began with RM, Jin, Suga, J-Hope, Jimin, V, and Jungkook alone in separate places that looked dark and gloomy. The room Suga was in looked like it was in ruins, while Jin's was flooded. Meanwhile, RM seemed like he was trapped somewhere with no way out. Once the chorus kicked in, the guys magically appeared together in a dream-like utopia outside, where they felt happy again, but it was only a vision.

As the video continued, the guys began seeing glimpses of light peeking through the dark places they were trapped in, making them hopeful they could all reunite. In the end, the guys realized only they had the strength to break themselves free, and together, they found a much better place.

Check out the music video below:

ARMYs pointed out the video alluded to several of BTS' other music videos through the years, including "Spring Day," which came out in 2016. The song has an equally as meaningful message as "Stay Gold" because it's about missing someone you love but hoping your "spring day" will arrive when you'll finally see each other again. Because the "Stay Gold" video ended with the guys reuniting in a warm and sunny place, fans feel it sends a message about staying strong and hopeful things will get better one day.

Here's what ARMYs are saying:

The video has so many easter eggs and references, and ARMYs are determined to find them all.

More like this
These Tweets About BTS' 'Bang Bang Con 2021' Sum Up The Epic Performance
By Cianna Garrison
These Tweets About Taylor Swift's "Mr. Perfectly Fine" All Ask 1 Important Question
By Sydney N. Sweeney
Rosé From BLACKPINK's "Gone" Music Video Is The Ultimate Sad-Girl Aesthetic
By Abby Monteil
Stay up to date