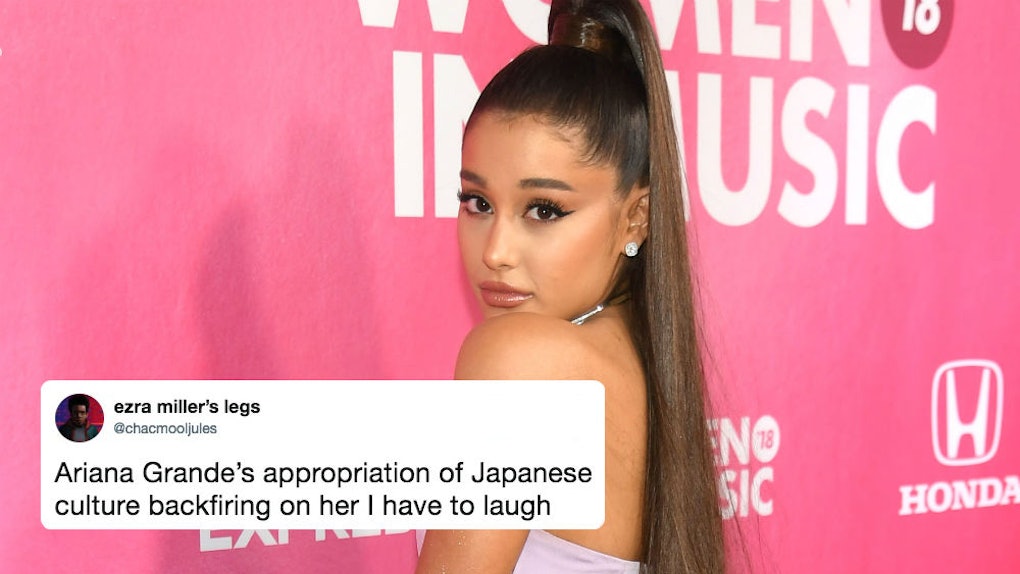 From misspelled quotes to bad memories of an ex, tattoo regret can be so, so real. Just ask Justin Bieber, who once famously had Selena Gomez's face inked on his wrist. Or former Cheetah Girl Adrienne Bailon, who totally got Rob Kardashian's name tattooed across her butt. #TBT! Anyway, you can probably now add a certain "Thank U, Next" singer to the list of celebrities having second thoughts about their ink. Because Grande's new tattoo, which she just got on her palm in order to honor the success of her new hit single "7 Rings," is totally spelled wrong, you guys! And the tweets about Ariana Grande's misspelled tattoo are calling her out for it.

See, on Jan. 29, the 25-year-old pop star reportedly hit up Instagram to share a since-deleted pic of her brand new ink that featured Japanese Kanji characters that she meant to spell out "7 Rings."

"This felt super good," Grande captioned an image of her hand with the fresh tat. "Jk. Everyone thinks this is a fake hand but it’s indeed…. my hand."

It may have been her hand, but fans were quick to point out in the comment section that those characters definitely didn't spell out "7 Rings." What they spelled out was "shichirin," which, it turns out, is actually a small Japanese-style barbecue grill.

Here's a picture of the ink that Ari's tattoo artist shared on Insta:

And here's the way fans responded to the mess up on social media:

Grande later deleted the image on Insta, then tweeted and deleted a response to the tattoo over on Twitter, too.

"Indeed, I left out 'つの指' which should have gone in between," she wrote. "It hurt like f*ck n still looks tight. I wouldn’t have lasted one more symbol lmao. But this spot also peels a ton and won’t last so if I miss it enough I’ll suffer thru the whole thing next time."

Look, it's nice that Grande seems to have a pretty good sense of humor about the screwup, and that she appears to be taking the whole thing in stride. But the Twitterverse is def dragging the singer now over her excuse that she purposely left some of the characters out of her tattoo because getting inked on her palm just simply hurt too much.

Are you buying Ari's excuse? I'm not so sure.

Other fans are calling Grande out for cultural appropriation, arguing her fixation with incorporating Japanese culture into her work (especially when she doesn't appear to know much about it) is problematic. Elite Daily reached out to Grande's reps for comment on the controversy, but did not hear back by the time of publication.

There's no two ways about it: this whole situation is just super, super unfortunate. When it comes to getting tattoos in another language you don't know or understand, maybe it's just best to say: