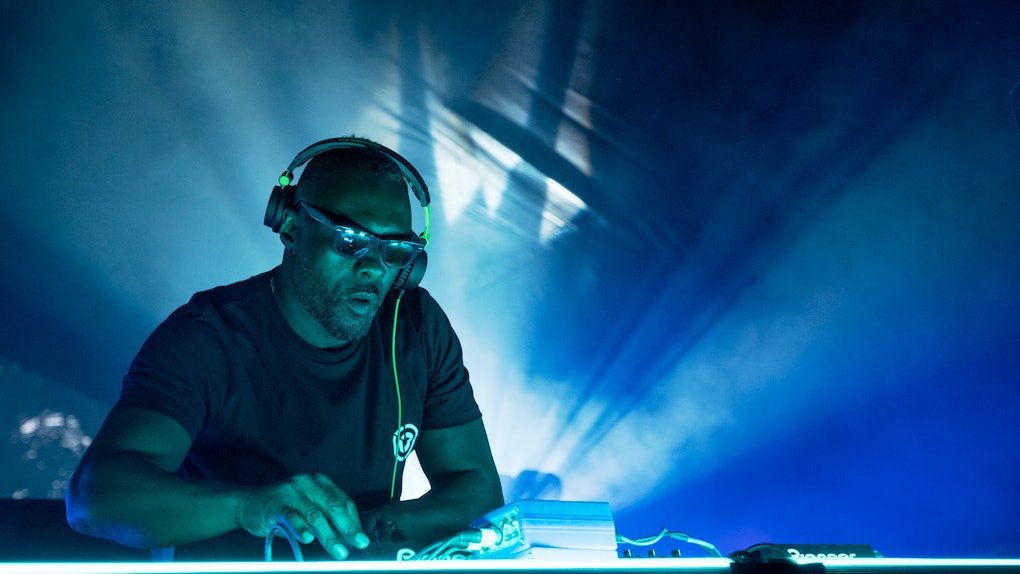 Nothing is more meta than listening to music from a TV show about a DJ. Netflix's new original comedy series Turn Up Charlie dropped on March 15, starring Idris Elba as a struggling DJ who agrees to work as a nanny to the daughter of his famous best friend. Hoping to revive his career, he tackles the challenges of dealing with a young child with a dose of humor. With past experience as a DJ IRL, Elba has definitely brought a realistic twist to his character Charlie, and the Turn Up Charlie soundtrack is proof that his alter ego can make a mean mix.

Elba, who also co-created Turn Up Charlie, started working as a DJ as early as his teenage years. In the past, the actor has released his own EPs and controlled the music at Prince Harry and Meghan Markle's wedding reception. He's even slated to DJ at Coachella this year, and that initial announcement highly confused plenty of fans who didn't realize that Elba had a musical side. Playing a character who's basically Elba's alter ego was naturally the next step in the revitalization of his DJ career.

Although the show's soundtrack isn't officially listed anywhere, a Spotify user has compiled a complete playlist of Turn Up Charlie's music. Featuring throwback party jams like the Spice Girls' "Wannabe" and Ricky Martin's "Livin' la Vida Loca," the soundtrack kicks off with "L.U.V," Elba's collaboration with Charlie AYO and Shaznay Lewis. His own creative touch also appears in the tracklist's "Boasty," on which he features alongside Wiley, Stefflon Don, and Sean Paul. After a listen to these club-ready tunes, the rest of the soundtrack's instantly recognizable music perfectly suits a pre-gaming session, a birthday party, or even just a dance fest at home with your friends.

As the reigning Sexiest Man Alive, Elba is more well-known for dramatic roles, but after a Saturday Night Live hosting stint and his Turn Up Charlie gig, the tables have turned. "I wanted to do some comedy, have some levity, and do something less serious," Elba told Fatherly about the new series. "I wanted to make my children laugh."

There's no news about whether a legitimate soundtrack will hit music platforms, but Elba has plenty of other musical projects to keep him occupied in the meantime. In 2018, he launched his own record label called 7WallaceMusic and celebrated the debut by signing his first artist, James BKS. Elba is also involved in the upcoming film adaptation of the stage musical Cats, and in an interview with Access, he teased the possibility of singing one of the show's numbers with co-star Taylor Swift.

The star has also poked fun at the amount of people who were perplexed about his involvement with Coachella. Speaking to Entertainment Tonight, he said, "I’ve been catching some heat. ‘Oh, he’s a DJ now?’ But I’ve been a DJ since I was 14, but Coachella is, like, a lifetime dream for any DJ. I’m so excited! I can’t wait."

Until we get a glimpse of Elba's Coachella's set, here's to rocking out to the Turn Up Charlie tracks.

Season 1 of Turn Up Charlie is now streaming on Netflix.