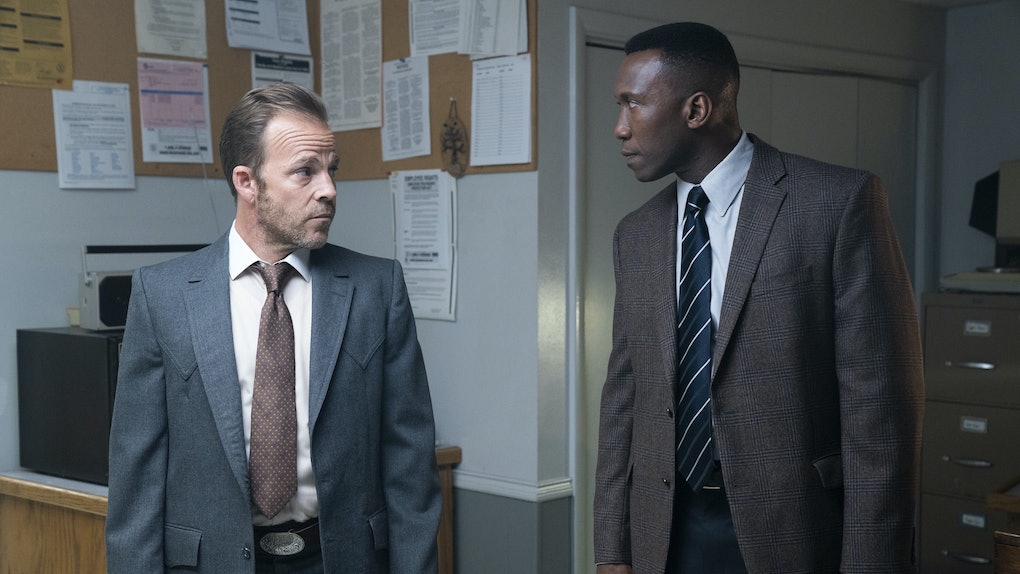 True Detective ended the weekend with a bang as the citizens of the small town where the Purcell children lived foolishly attempted to take the law into their own hands — with some seriously dramatic consequences. With four more episodes to go in the story, last night's deadly mistake felt like a turning point in the 1980s-era investigation, with more deaths serving as a massive distraction from the real clues that came up during the hour. But the True Detective Season 3 episode 5 promo hints that throwing the detectives off of their game may have been no accident at all. Warning: Spoilers for True Detective Season 3 follow.

With the explosion at Brett "Trashman" Woodard's house at the end of Sunday's episode, what was the disappearance of a little girl and the death of a young boy has now escalated into a major tragedy in the small town. This week's episode will see those in the 1980s deal with the fallout, which echoes across three eras. The episode is entitled "If You Have Ghosts."

Wayne Hays finds himself in a no-win situation as new clues emerge in the Purcell case. Roland West wrestles with how to keep evidence secure as lawyers demand a new investigation. Amelia finds her relationship with Wayne imperiled by her writing aspirations and his jealousy.

The trailer picks up with a clip from the 1990s, where West notes that the town has died between the time of the first and second investigation. But Hays' response, "It got murdered," may be more accurate than even he knows. Elisa Montgomery notes during their resumed interviews how many people connected to the case disappeared, died, or were otherwise silenced.

Also, there is a clip with Amelia reading aloud from the true crime novel she eventually wrote on the case in the early 1990s. The synopsis notes that Hays will struggle in the upcoming episode with his feelings over the book that the 2015 scenes have told viewers will become a runaway best seller.

It also seems Montgomery has theories as to why the case was derailed twice with no resolution — at least none Hays can remember — and they stem from Amelia's book.

From the beginning, there have been hints that Julie's kidnapping may have had pedophilic connotations, such as the peephole drilled to see into her room, and the dirty magazines stored under Will's mattress that didn't belong to the boy. The series has not gone all the way with this idea as of yet, but Julie Purcell's state on the video camera during the 1990 drug store robbery could suggest she has spent the last decade being trained to keep herself off security cameras.

Could her kidnapping be part of a larger conspiracy of powerful men enslaving young girls? True Detective hasn't gone there, but Montgomery's research may just uncover that there was more at play than Hays ever knew, even when he could remember the past.