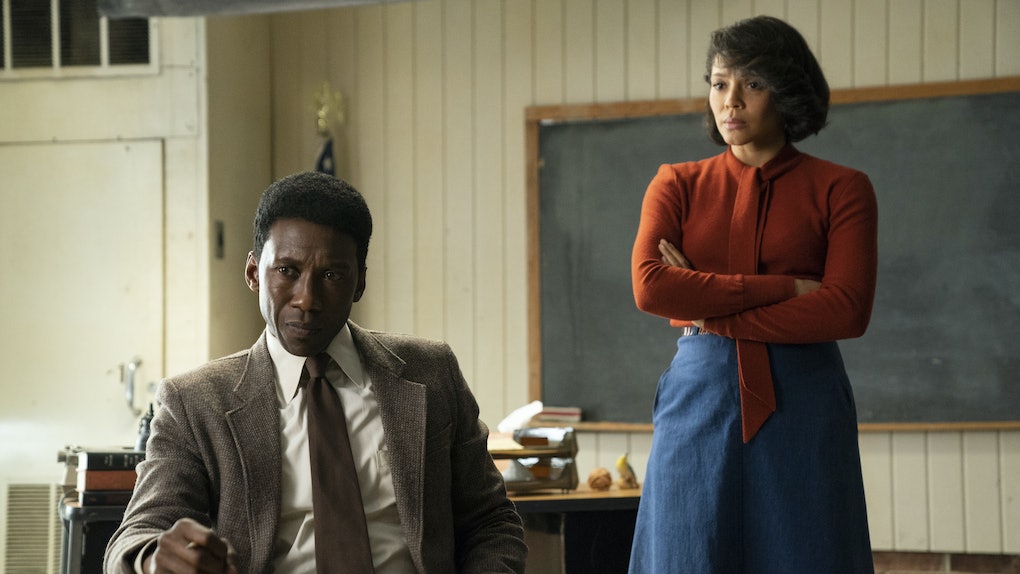 True Detective's newest mystery is the show's first big hit since Season 1 in 2014, and one of the primary reasons is the star. Mahershala Ali, who just landed yet another Oscar nomination for his work in Green Book, carries the series by himself for most of the first three episodes, with assists from Carmen Ejogo and Stephen Dorff. This past Sunday's episode gave Dorff's Roland West a more prominent role to play against Ali's Wayne Hays. And now, the True Detective Season 3 Episode 4 promo suggests next week, fans will get to see them buddy-cop across two eras.

This coming week's episode is entitled "The Hour and the Day," which sounds both like a reference to time being a flat circle and an appointment with destiny. Fans will have to see if Hays manages to land the latter while pondering the implications of the former.

Hays (Mahershala Ali) and West (Stephen Dorff) see a possible connection between the local church and the Purcell crimes. As the detectives search for one suspect and round up another for interrogation, Woodard (Michael Greyeyes) is targeted by a vigilante group.

This week's episode will be the first this season directed by creator Nic Pizzolatto. Check out the trailer:

One of the major themes last week was Hays' memory. With 2015 Hays sent to a doctor and trying to argue his way out of facing the symptoms of encroaching dementia, in both 1980 and 1990, Hays' memory is praised. In 1990, West noted his former partner has a better head for remembering things than he did. Yet this is all contradicted in 2015, as Eliza accuses Hays and company of not interviewing every suspect they could have, despite her subject's insistence, as far as he remembers, they did.

This week focuses on the case of Julie, both in the 1980s and 1990s. In the original case West and Hays put together what fans have been suspecting since Julie was revealed to be alive: It was never about her brother. He was extraneous, a "kill the spare" death.

In 1990, West seems to have taken their failure to find Julie slightly personally. All signs pointed to her being as dead as her brother, which he assumes must have been a deliberate misdirection on someone's part. But who?

Also this week, Hays and West are going to turn up the original proto-Martha Stewart who made the corn husk dolls. Despite the creepiness of these symbolic clues running around, it's been remarkable how not-mystical they are. They really are just made by someone who a decade later would probably subscribe to Martha Stewart Living, and who sold them to make ends meet, like any good craftsperson. If it were 2015, they might have been a significant feature of her Etsy shop.

Also next week, new suspects will arise, but I'm personally more concerned what happens to poor Brett “Trashman” Woodard. After last week's near-lynching by a mob of townspeople, his life may be the next to be lost.