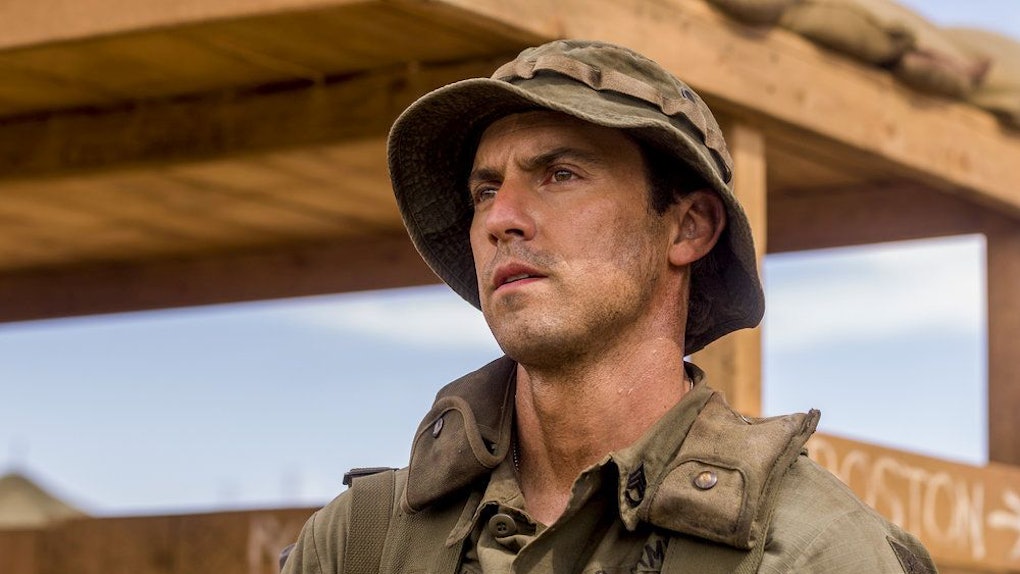 It's been a really long time coming, but finally, after two full seasons, This Is Us finally gave viewers the backstory on how and why Jack Pearson went to Vietnam. The episode was a dedicated hour to Jack's past, with no scenes intercut from the 1980s or points beyond. The result was a full-on period piece that began when Jack finds Nicky at his current station overseas and slowly rolling backward to show how he got there. But the best part is the This Is Us Vietnam episode soundtrack, which really pulls the viewer into the era. Warning: Spoilers for This Is Us Season 3 follow.

Nearly all TV shows set in the mid-20th-century era use popular music to help set the tone. (FX's The Americans was notably great at this.) But This Is Us hasn't actually leaned into that to help place where they are in time, instead focusing on costumes and hairstyles to set the tone.

This episode breaks with that. Instead, it uses folk rock from the era all throughout the hour to punctuate the war as Jack experienced it. It also slowly rolls back the dial to the mid-1960s period back home before he and Nicky are shipped out.

"Darkness, Darkness" by The Youngbloods

A perfect song to set the era for this episode. This track, which kicks off Jack's first appearance in Vietnam, is off The Youngblood's Elephant Mountain album, released in 1969. The song was actually released twice as a single, once in 1969 and then a second time in 1970.

A song that actually places exactly what year it is in the show when Jack was in Vietnam. "Child's Song" is from Tom Rush's eponymous album from 1970. The track is the final one on the album, and a bit of a deep cut, as it was never released as a standalone single. It plays after Jack's unit is moved to their easy gig after losing two of their members.

"No Sugar Tonight/New Mother Nature" by The Guess Who

The second track from 1970, this is from The Guess Who's 1970's album, American Woman. It was released as the B-Side single to the far more famous title track from the album. It plays as Jack reads Nicky's letter of being stuck in Vietnam, having been committed under "Article 15" as a danger to himself and others.

"The Ballad Of You & Me & Pooneil" by Jefferson Airplane

As the timeline moves backward, so does the music. With time rolling back 14 months, the show is now firmly in the mid-1960. So, after three tracks from 1969-1970, the soundtrack rolls back to a Summer Of Love-era song from 1967, off of the Jefferson Airplane After Bathing at Baxter's album.

The hardest song to hear is the one playing in the background of the truck ride with Nicky after he finds out he's been drafted. It's another mid-1960s tune, as the show has rolled back another year in time, by George Washington Bridge from their double-sided single Butterball / Train Ride.

The final track is a cover of the opening song, by the Nashville-based Escondido, an alt-country band. There are actually tons of bands which have covered this song (it's pretty famous), but according to Shazam, this version was recorded especially for this season of This is Us.