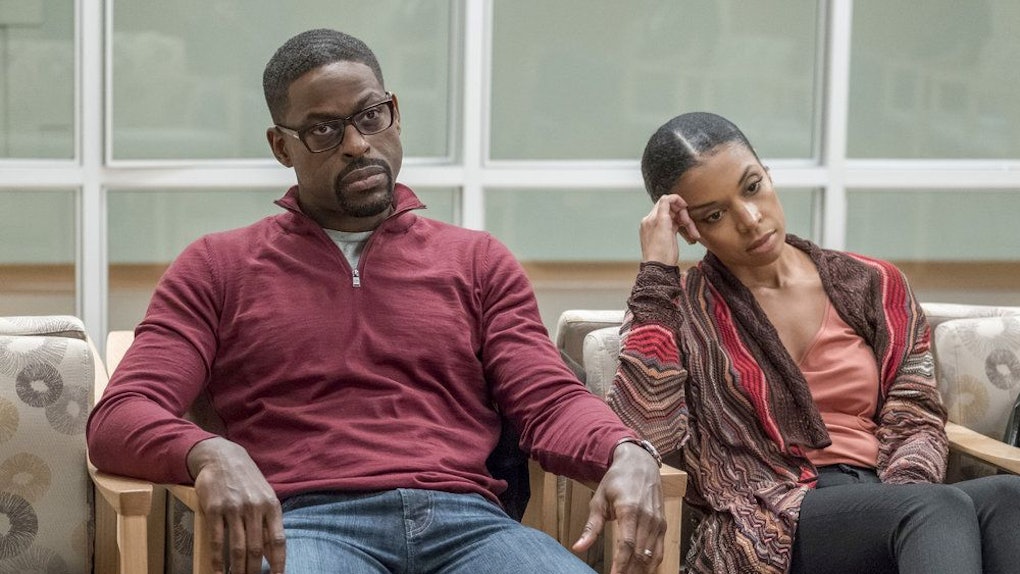 After a couple of breaks in the schedule and a This Is Beth episode, This Is Us got back on track this week, full speed ahead to the Season 3 finale later this month. Kevin's drinking is once again at the forefront, as is Kate's pregnancy, as both twins had their respective issues come to a head at the end of the last episode. The difference is only one of them wound up admitted to the hospital. Kate's water broke 12 weeks early, setting up the situation for this week's This Is Us Season 3 Episode 15 promo, appropriately entitled "The Waiting Room."

That's where all our characters were when the episode ended, and it's where they'll all still be when next week picks back up. Randall and Beth are there, interrupted from a discussion where he was (unfairly) demanding she give her dream back up after finding it again. Zoe and Kevin are there, him still so drunk he couldn't even drive Kate to the hospital. Toby is there, being his usual anxious, thunderheaded self. Finally, Rebecca and Miguel are there, waiting to learn if they'll lose someone else.

The synopsis this week is pretty pithy:

The trailer shows nothing but scenes from the waiting room.

In most cases, fans would assume there will be some flashbacks, some other story echoing the events of the present. But not this time. Speaking to Entertainment Weekly, This Is Us executive producer Isaac Aptaker says what fans see is what fans get.

It is our “This Is Us: The Play.” It’s all our characters in one room, which you can probably guess what room that is now, waiting around and getting into it as they await some news.

In Season 2, the winter mid-season premiere featured a nearly 15-minute scene where the Pearson clan sit down with Kevin and his therapist at the rehab clinic. In it, the actors go at each other for a quarter of the episode. It was a remarkable moment in a series that likes to bounce around between storylines, families, different eras and different casts. It was also part of why the cast won SAG-AFTRA's award for Outstanding Performance by an Ensemble in a Drama this past January.

Aptaker admits outright the experience in filming this scene was the inspiration for this week's episode.

That was the scene that made us want to do this episode. Seeing what it’s like when you put all those actors in a space and just let them hash it out and act their faces off for, that was like a 10-11-minute scene made us go, “Well, let’s try doing one the whole hour.” So that is what we’re doing here... It’s such a spectacular hour that Bekah Brunstetter wrote; she is a playwright. We had Kevin Hooks, who’s this incredibly seasoned television director, do it for us, and we just built this waiting room and threw everyone in it.

Come one come all, to the episode NBC and This Is Us will be submitting to this year's Emmys for their consideration. The show airs on Tuesdays at 9 p.m. ET on NBC.