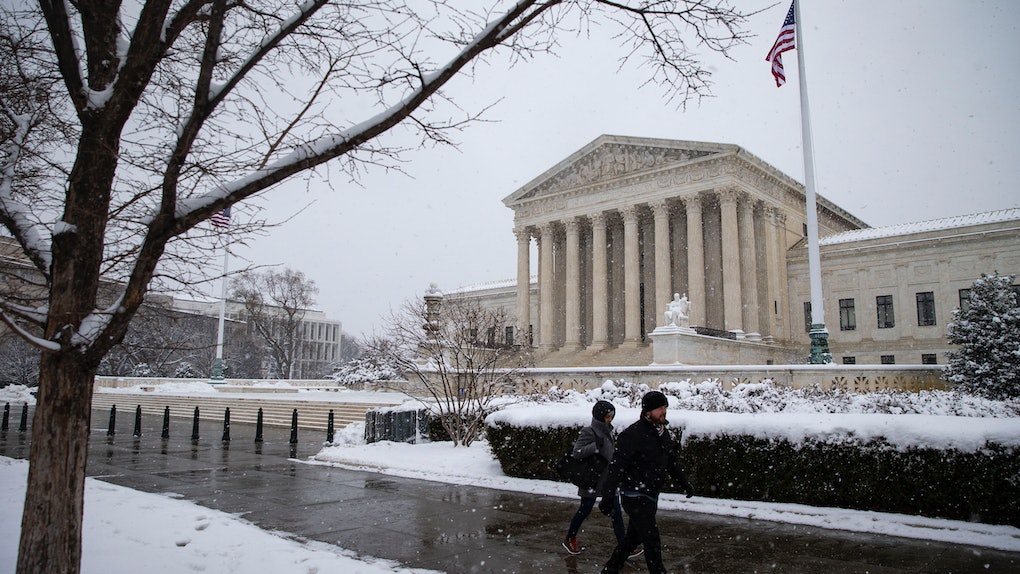 We're only three weeks into 2019 and there are already some wild (and controversial) orders coming from the Supreme Court. On Tuesday, Jan. 22, the Supreme Court allowed Trump's transgender military ban to go into effect, reviving the president's attempts to block transgender individuals from enlisting or serving in the armed forces. Looks like this year is gonna be one for the books.

In July of 2017, President Donald Trump announced that his administration would not be allowing transgender individuals to serve in the armed forces, a directive that was immediately legally challenged and began making its way through numerous court battles. Previously, lower courts placed injunctions on President Trump's attempted ban, which prevented him from enforcing it, but on Jan. 22, the nation's highest court voted to lift some of those injunctions to allow the ban to go into effect, The New York Times reported. One lower court injunction was not included in the cases that the Supreme Court reviewed, per Vox, but it's unclear whether that last injunction will remain in effect. The White House did not immediately respond to Elite Daily's request for comment.

According to The Washington Post, the court split 5-4 on allowing the plan to take effect. Chief Justice John G. Roberts, as well as Justices Clarence Thomas, Samuel A. Alito, Neil M. Gorsuch and Brett M. Kavanaugh voted in support of lifting the injunctions on the ban, while Justices Ruth Bader Ginsburg, Stephen G. Breyer, Sonia Sotomayor and Elena Kagan opposed it.

The court declined, however, to immediately hear appeals of lower-court rulings which have not yet been handed down. The Trump administration had requested that the Supreme Court take on the issue ahead of rulings from regional courts, essentially leapfrogging lower courts and taking the matter straight to the top. The policy will be allowed to go into effect while lower courts continue to debate the issue.

In a statement, the Department of Defense (DOD) told Elite Daily that it was "pleased" with the order and the DOD treated all trans individuals with respect and dignity. "DoD's proposed policy is NOT a ban on service by transgender persons," says spokesperson Lt. Col. Carla Gleason. The statement continues,

Trump first announced his plans to repeal the Obama-era policy that allows transgender people to serve in the military and receive funding for gender-confirmation surgery in July of 2017 via Twitter, citing what he says is “tremendous medical costs and disruption.” Vox notes that research has found that trans-inclusive medical care would run the military an increase of perhaps 0.13 percent in its health care costs.

In August 2017, the president rolled out a formal policy saying that his administration would return to the military's pre-2016 policy, under which openly transgender people were prevented from serving. The policy also blocked the DOD from using its resources to help provide medical treatment services to transgender individuals enrolled in the military, per CNN.

However, his ban has faced several challenges in the courts, with some finding that transgender service members who filed lawsuits over the policy were likely to win. As a result, the Pentagon announced that openly transgender people would be allowed to enlist in the military starting on Jan. 1, 2018.

In March of 2018, the president unveiled an updated policy that attempted to fix legal problems with the original. A statement announcing the new version read,

Transgender persons with a history or diagnosis of gender dysphoria — individuals who the policies state may require substantial medical treatment, including medications and surgery — are disqualified from military service except under certain limited circumstances.

A Pentagon memo about the policy said exceptions to the ban would include people who have been "stable for 36 consecutive months in their biological sex prior to accession," service members who "do not require a change of gender" and those who served under President Obama's policy before the new memo was revealed. According to BBC News, estimates say between 4,000 and 10,000 U.S. service members are believed to be transgender.

And now, thanks to the Supreme Court, Trump may be one step closer to having the ban enforced for good. And there are even more cases the Supreme Court will hear this year that have high stakes. Le sigh. Get ready guys.