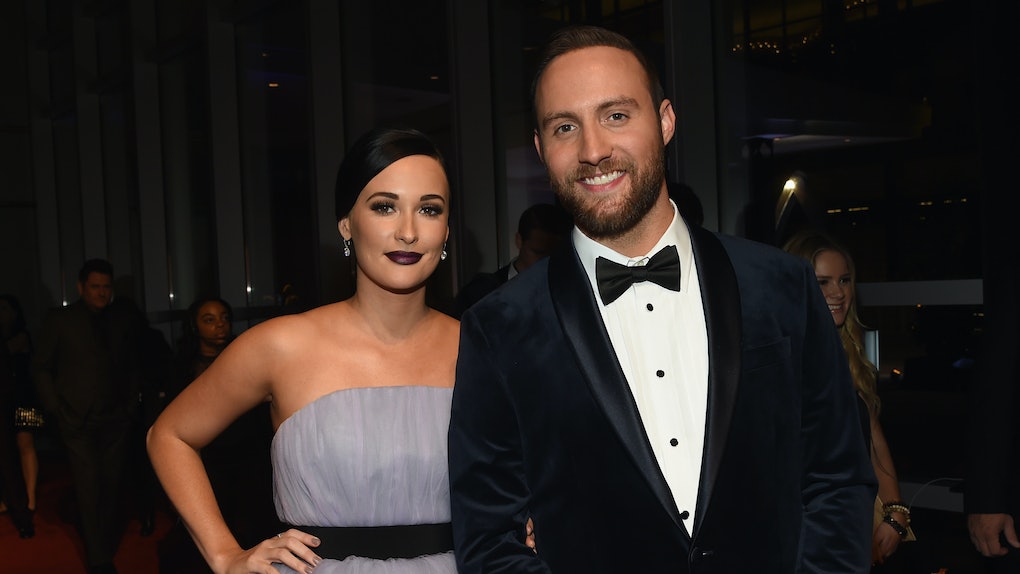 Kacey Musgraves is on top of the world right now. With multiple Grammy wins, a smash album, and a fire social media following, how could anyone not like her? The 30-year-old gives everyone butterflies when she performs, and she's taken country music to a whole new level. In short, she's crushing life in more ways than just one. And ICYMI, she's also living a real-life fairytale romance. Trust me, once you learn how Kacey Musgraves met her husband, you'll believe in true love.

After winning four Grammy Awards this year, Musgraves is really only just getting started. In an interview with Glamour for their April cover, the Golden Hour songstress got super real about her career success and her personal life, including details about her marriage to Ruston Kelly. The Texas native told the story of how she and Kelly met, and it's almost straight out of a country romance novel.

Like something only Taylor Swift herself could have created, Musgraves explained that she was at the famous Nashville joint, Bluebird Cafe , when she saw Kelly for the first time. (Performing, no less.) She was instantly swept off her feet.

Musgraves told Glamour that it was more than just Kelly's good looks that made her swoon. "His songs made me really emotional," she said. "I thought, 'This guy's really clever, whoever he is.'" Soon, the two struck up conversation and made plans for him to come over to her place so they could write together.

"And then it was 'That’s all she wrote'," Musgraves told Glamour. "Pun intended." The rest is history, really. Musgraves and Kelly got married in October 2017 in the most gorgeous ceremony ever, but it was that first meeting that really changed everything. "Everything was right," Musgraves told Glamour. "I didn't have to shift any part of my personality to make it fit together, which isn’t really something I've had before."

She also said that meeting her husband and finding that love inspired a wave of creativity for her. “That whole time period was a big opening of heart for me,” she told Glamour. “I started to see the world in a more fond, pretty light. After meeting this person who really allows me to just be myself, not have to walk on eggshells for any reason, songs started pouring out.” Ugh, is your heart melting yet?

In a March 2018 interview with Texas Monthly, Kelly also spoke about that first meeting, explaining how totally taken he was with Musgraves right off the bat. He said falling for Musgraves was almost instant.

"She was wearing a black dress, and of course she had that long black hair," he told the magazine. "I thought, 'This is the most beautiful woman I’ve ever seen.'" They were both totally swept off their feet by each other, and it seems like their first meeting (which is seriously giving me Jack and Rebecca on This Is Us vibes) was straight out of a country love song. In fact, it actually did inspire Musgraves' hit song, "Butterflies."

There's no telling what Musgraves will conquer next in life, but one thing is certain: The sun might never set on her and Kelly's golden hour.