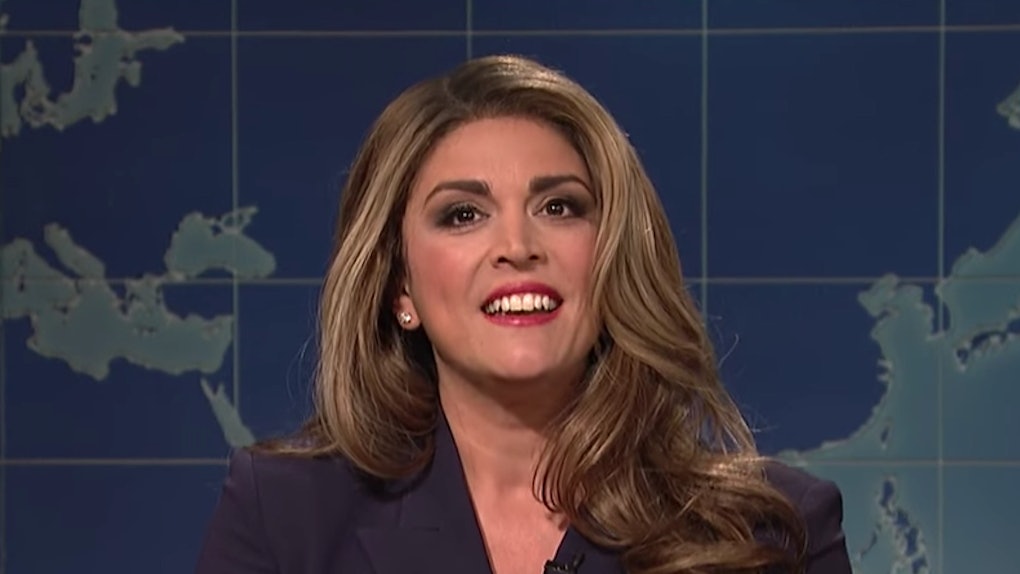 You know her name, and you've seen her picture plenty of times — but you probably haven't ever heard much from President Donald Trump's former communications director, Hope Hicks. Hicks remained somewhat out of the spotlight when she was a member of the Trump administration. Since Hicks resigned from her position at the White House on Feb. 28, Saturday Night Live took the opportunity to guess what Hicks might say in her farewell statement, and Twitter is loving the SNL Hope Hicks sketch.

Strong's impersonation of Hicks happened during "Weekend Update," according to Vanity Fair, and Strong's character came out immediately addressing the fact that most people have never heard Hicks speak. One of the "Update" anchors, Colin Jost, got the ball rolling when he said, "I feel like I’ve never heard you speak." Confirming this, Strong's Hicks says she's "never had to" speak because, as she said, "The media's been so nice to me."

As Strong played Hicks, she donned a navy blazer and sported a long, wavy hairstyle à la Hicks. As SNL hammered home the sketch's opening plot point that the public so rarely heard from Hicks in her position President Trump's communication director, Strong's Hicks gives her reason why the media stayed away from her. She explained, "If I had to guess, I'd say because my hair and face are good."

With her "good" face and hair accounted for, Strong's Hicks moves on to explaining what it was like working at the White House, and SNL did not pull any punches when it came to the character of Hicks describing the current personnel in the White House. She likened it to summer camp (playing on the 29-year-old's age) as she talked about making friends, sleepless nights and how "everybody leaves after eight weeks," alluding of course to the long line of people who have been fired or resigned from the Trump administration.

Strong's Hicks then describes the "classic bad boys" of the White House with their "crazy haircuts" and tendency for "breaking the law." Her last description of "bad boys" about how "they've all hit a girl" is a not-so-thinly veiled mention of the reported relationship between ousted Trump aide Rob Porter and Hicks. Porter was fired in February amidst abuse allegations and photos of the reported abuse from Porter's two ex-wives. (Porter commented on the allegations to the DailyMail.com when he said, "I will not comment about these matters, beyond stating that many of these allegations are slanderous and simply false.")

Quickly moving on, Strong's Hicks talks about how she'll miss her friends from her "semester abroad at the White House." She thanked her White House friends who "left footprints on her heart and fingerprints on Russian documents." That was the first of two mentions of the ongoing investigation into Russian interference in the 2016 U.S. presidential election. The second came as she talked about her "inside joke" with President Trump when she said, "The meeting was about Russian adoption." It was reported by the New York Times in January 2018 that Hicks was the person who told President Trump that emails from Donald Trump, Jr. about the infamous Trump Tower meeting with Russian lawyer to get dirt on Hillary Clinton "will never get out."

Strong's Hicks closed her farewell alluding to the fact that the real Hicks could be in some legal trouble due to her reported actions during her time at the White House when Strong said, "To everyone else at the Trump White House, I’ll see you at the reunion in ten years—seven with good behavior."

The sketch hit all the right notes for many viewers who showed the love on Twitter.

"Hilarious...and pathetically based on facts."

"Hope's farewell messages to her friends at the WH struck the right chord."

"OK, needed the laugh. Things been gettin' too real."

"Can't wait to see the reunion for the ex-Trump White House in both real and SNL settings..."

It was definitely interesting to see SNL's take on Hicks since she was able to mostly stay out of the spotlight during her tenure as President Trump's communication director. Even though the audience doesn't have much to go on to compare Strong's impression of Hicks to how Hicks actually speaks, they still seemed to enjoy the comedic reprieve from the never-ending Trump news cycle.

Given that the Trump White House keeps the public on their toes wondering what will happen next, it seems that people enjoy the chance to laugh about some of the daily goings-on of one the most unique presidencies in U.S. history. SNL doesn't appear to have any plans to shy away from the Trump White House, so you can probably expect to keep seeing the parodies play out on the show week after week.