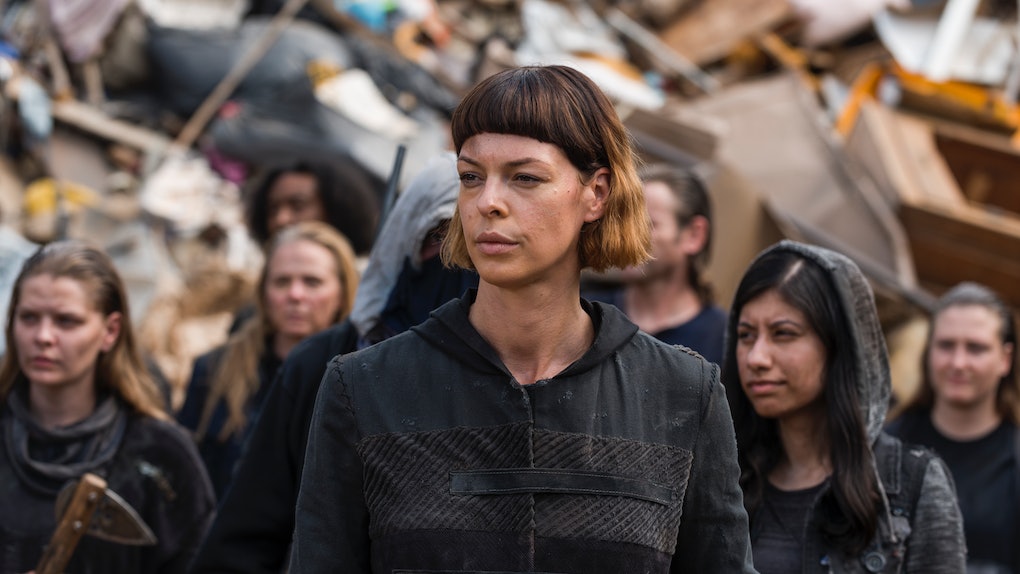 The Scavengers Are Coming Back On ’The Walking Dead’ Season 8 Episode 6, & Why

It’s hard to believe that we’re already five episodes into The Walking Dead’s Season 8. But man, have those five episodes ever delivered on the season’s promise of “all out war.” And now, it looks like there’s another side getting sucked into the war, as the promo for next week’s episode, “The King, the Widow, and Rick,” shows Rick meeting with the Scavengers to propose a deal — again.

While the end of this week’s episode, “The Big Scary U,” showed Rick approaching an unknown compound, walking alone with only one gun, the promo for the next episode seems to indicate that he’s heading to meet the Scavengers. The video shows Rick being escorted into a compound full of scrap metal and surrounded by a double-ring of people with weapons. At the far end of the circle stands Jadis, the leader of the Scavengers — and as she and Rick face off, he has a pretty straightforward message for her.

“Your choice,” Rick’s voiceover says. “The same thing I wanted before. A deal. Or,” he says, “we destroy you.” Well, that’s pretty unambiguous.

On the other hand though, is it a good idea? The Scavengers haven’t exactly proven themselves reliable allies, after all.

In Season 7, Rick and the Alexandrians made a deal with the Scavengers, agreeing to fight against the Saviors in exchange for guns and supplies. But despite Rick’s group fulfilling their end and delivering the guns, the Scavengers turned on them, betraying them to the Saviors and warning Negan about Rick’s war plans. Their betrayal led to a battle at Alexandria between the Saviors, the Hilltop, and the Kingdom, which did nobody any good — the Scavengers themselves took the brunt of the damage in the battle.

So does anybody really have a good reason to want to get together and try this again?

Unfortunately, in Episode 3, "Monsters," Rick and company lost a whole bunch of their allies when the Saviors gunned down a huge part of the Kingdom's fighting force. Although their leader, King Ezekiel, managed to get away — barely — the loss of actual fighters is probably going to be a problem. Rick's side needs more people, and they're going back to where they know they can find them, sketchy or otherwise.

Meanwhile, in the sneak peek, fans are getting a look at another alliance — that of Rosita and Michonne, who are apparently taking off together in defiance of Rick's orders. Where are they going? To see who? Who knows, but it's sure to be a very depressing buddy road trip.

Both of the promos, however, fit with the themes of "The Big Scary U" — which was all about uncomfortable alliances between enemies and unexpected fractures among friends. Negan and Father Gabriel engaged in a weird confessional of their sins and backstories while trapped in a trailer surrounded by walkers, and finished the episode by working together to get out of the situation (even though for Gabriel it ended up being out of the frying pan and into the fire, as Negan immediately put him in a cell). Meanwhile, Negan's deputies tried to figure out how to maintain control over the Sanctuary without their charismatic leader, and were on the verge of screwing it all up irreparably when Negan made his very timely reappearance. On the other hand, Rick and Daryl managed to get into a fight and blow up a car, not to mention a whole bunch of guns, before becoming friends once more.

So which relationship, if any, is a hint of how things with the Scavengers might go on next week's episode? Your guess is as good as mine. But I feel safe in saying that no one's going to turn their back on the others.