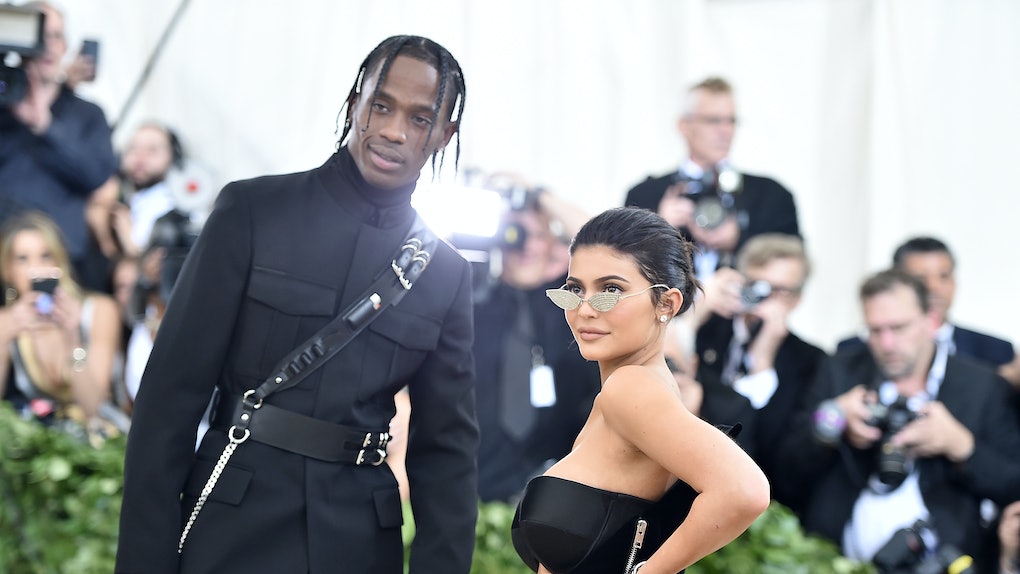 It's been a dramatic handful of weeks for the Kardashians. The dust might soon begin to settle now that Jordyn Woods' appearance on Jada Pinkett Smith's Red Table Talk is over and done with, and now that Khloé Kardashian has given her two cents on it all. That brief Kylie and Travis drama that bubbled up in the middle of all of that chaos seems to be done with as well. On Feb. 28, TMZ claimed that Jenner had reportedly accused Scott of cheating. Woods' Red Table Talk was the next day. Elite Daily reached out to Jenner and Scott's teams regarding initial reports of Jenner's accusations, but did not hear back by the time of publication. Now, a source has given insight as to why Kylie Jenner may have accused Travis Scott of cheating, and it honestly makes sense.

A source told People that Jenner, after a hard week of learning the story of what went down between Jordyn Woods and Tristan Thompson, was emotionally exhausted and seemed to have taken it out on Scott.

“Kylie had a rough week,” the source told the outlet. “She is still devastated about Jordyn and had an argument with Travis after she checked his phone and saw something that she didn’t like.” Elite Daily reached out to Jenner and Scott's teams for comment on this report, but did not hear back by the time of publication.

Honestly, we've all been there. It's hard to keep yourself in check sometimes when you're really stressed. And when you're stressed, it can be hard not to take your stress out on other people who aren't involved. Also, it's not hard to see why Jenner would possibly be afraid of learning she had been cheated on when her best friend was involved in a cheating scandal with her sister's boyfriend. If this was the reason behind Jenner accusing Scott of cheating, I totally empathize. I'd have trust issues that week, too! I mean, damn!

After TMZ originally reported that Jenner had accused Scott of cheating, Scott's reps strongly denied the claims in a statement to E! News. Scott had canceled a concert in Buffalo, NY, scheduled for Feb. 27 due to an illness, but TMZ's initial report claimed that he wasn't actually sick. The report claimed that he had flown back to L.A. to be with Jenner and Stormi, and that's when their fight happened, prompting him to cancel the show in order to smooth things over with Jenner. Elite Daily previously reached out to Jenner and Scott's teams for comment on this report, but didn't hear back.

At a concert in New York City on Sunday, March 3, however, Scott reportedly told the audience to "remember to keep your family first" and gave Jenner a shoutout, calling her his "wifey" again. Elite Daily reached out to Scott's team for comment on the shoutout, but didn't hear back by the time of publication.

Circling back to the reason Jenner might have accused Scott of cheating, the source echoes Scott's team's statement.

“Travis says he didn’t cheat," the source told People, noting that “Kylie was upset at first,” but she “seems better” now.

“She isn’t breaking up with him,” they concluded. Well, that's good! I don't think the Kardashian-Jenner family can do with much more relationship drama right now.

LOL, who am I kidding? There will most likely be a new "scandal" next week. This is Kris Jenner's world, and we're just living in it.