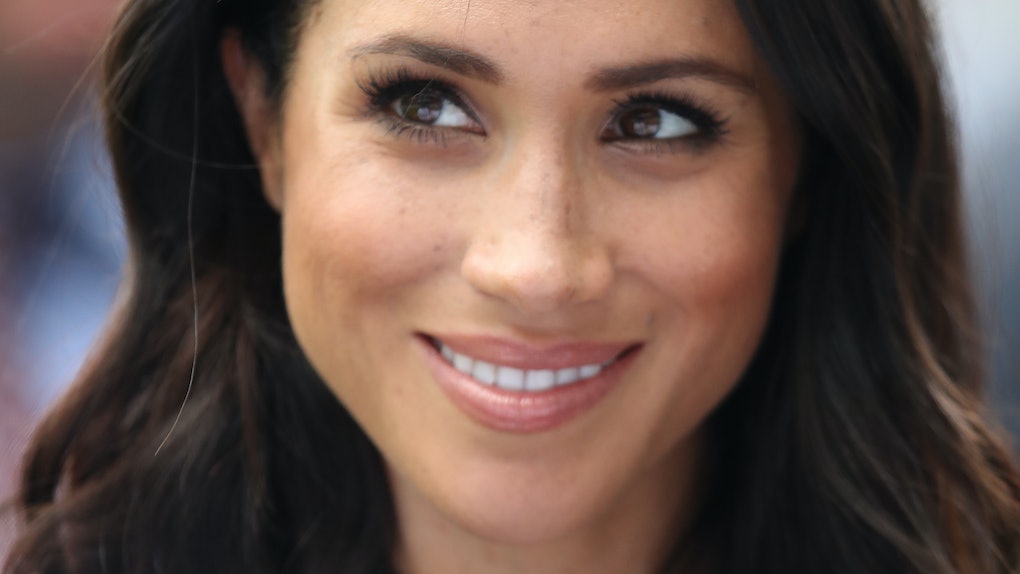 At this point, you, along with the rest of the world, are probably waiting with bated breath for the Duke and Duchess of Sussex's much-hyped Oprah interview. While the event doesn't air until March 7 at 8 p.m. ET on CBS, the pre-released teasers already lit the internet aflame with rumors and speculation. One thing standing out to fans is the rumored meaning behind Meghan Markle's Oprah interview dress, or at least one aspect of it.

For the interview, Markle, who is pregnant with her second child, wore a black, belted silk Armani dress that retails for $4,700. The part that royal fans really focused on, though, was the lotus detail traveling down the right-hand shoulder of the dress. People were quick to point out that, in Hinduism and Buddhism, the lotus flower is reportedly a symbol of rebirth. Every night, the flower submerges into dirty, muddy water before re-blooming the next day, beautiful and sparkly clean. Some speculators believe this could be a subtle nod to Markle and Harry's exit from the royal family in January 2020 as their flourish in their new life together in California.

That's not the only potential piece of symbolism in Markle's outfit. She also wore a diamond tennis bracelet that once belonged to Princess Diana. It's the same bracelet that was used to make the Duchess' three-stone engagement ring, but there's reportedly even more meaning behind its appearance at the couple's Oprah interview. According to People , the choice to wear that particular bracelet was so the two could feel as if Diana was with them.

Fashion has reportedly been a means of sending subtle messages long before Markle joined the royal family, and she's no stranger to telling a story with her clothes. When announcing her second pregnancy, the 39-year-old wore a Carolina Herrera dress that was made for when she was pregnant with Archie as a nod to her son. Her choice of a lemon-covered Oscar de la Renta dress in Feb. 2021 left many thinking the former royal was showing her belief in a fruitful future and new beginnings. While it's impossible to know what, if anything, Markle means with her Armani dress, perhaps more insight will come to light when the interview airs.