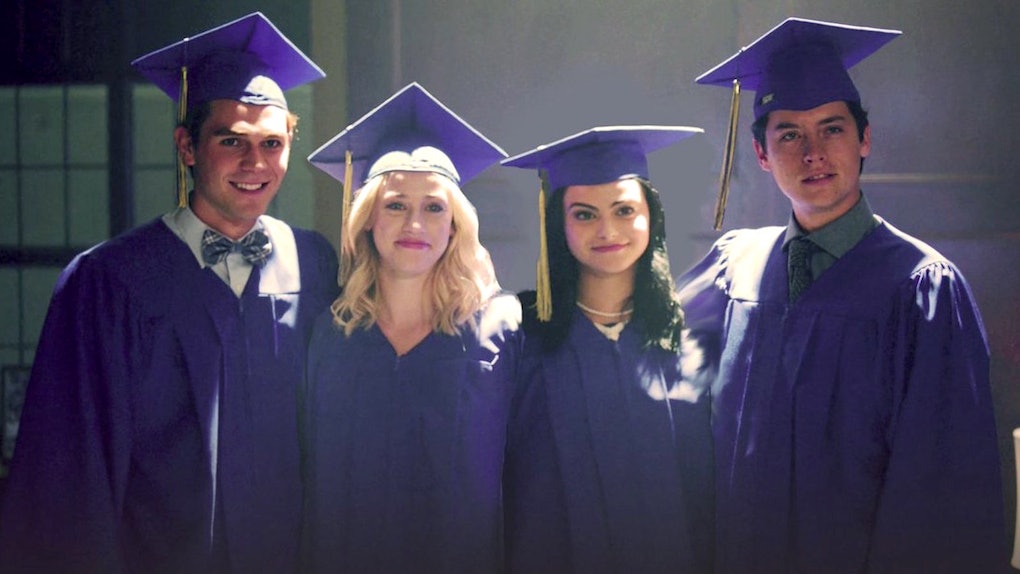 After three seasons of watching a group of alleged high school students investigate murders, outwit mob bosses, infiltrate cults, fight bears, and basically do every possible thing except attend class, Riverdale fans will finally get to see Archie, Betty, Veronica, and Jughead actually return to high school in Season 4. It's been a long-running joke among the show's fandom that the Riverdale teens have seriously been neglecting their studies, but the Riverdale Season 4 Episode 2 synopsis promises the new season will focus less on masked serial killers and drug-laden board games, and instead refocus on the goings-on at Riverdale High.

The first episode of Riverdale's new season will serve as a tribute to Luke Perry, centering on the characters saying goodbye to Perry's character Fred Andrews. Showrunner Roberto Aguirre-Sacasa confirmed the season premiere will be "very much a standalone episode," which means that the actual plot of Season 4 won't really kick off until Episode 2.

The second episode of the new season makes it pretty clear that the kids in Riverdale are ready to refocus on high school now that all the Gargoyle King and Black Hood nonsense has been dealt with. The episode, which will air on Oct. 16, is titled "Fast Times at Riverdale High," and the plot synopsis (via ComicBook.com) teases a ton of high school drama.

FIRST DAY OF SENIOR YEAR — Archie encourages Mad Dog to attend Riverdale High and join the football team. Jughead meets Mr. Chipping, who offers him a spot at an elite school called Stonewall Prep. Veronica is conflicted when information about her involvement in Hiram’s arrest leaks to the public. Kevin applies for a spot on the Blue & Gold to make amends with Betty. And Cheryl goes head to head with Mr. Honey, the school’s new principal.

In what sounds like a shockingly quaint storyline for Archie, the new episode will center on the redhead bringing his juvie buddy Mad Dog into the Riverdale High fold by helping him join the football team. I guess Mad Dog was just so inspired by that epically cringe-y speech about high school football that Archie gave while in the youth detention center.

But while Archie is making new friends, it sounds like Betty will be cutting ties with an old one. After Kevin went full-blown Farmie last season, he and Betty have been on the outs. The new episode will see Kevin trying to patch things up, but considering he was part of the cult that abducted Betty's mom and sister, reconciliation probably won't come easily.

The biggest twist of this episode, though, will likely be Jughead leaving Riverdale High. Cole Sprouse has revealed Jughead will attend a pretentious new private school in Season 4, and the synopsis confirms he will get the invite to attend Stonewall Prep in Episode 2. He might be leaving Riverdale High at exactly the right time, since the synopsis also teases that Cheryl will have a serious clash with the school's new principal, Mr. Honey.

While all of this goes down at Riverdale High, Veronica will yet again be dealing with some decidedly adult issues. After being instrumental in throwing her mob boss father into jail, it sounds like the young Lodge will have to deal with some ramifications for her actions.

More like this
The 'Grey's Anatomy' Season 17, Episode 12 Promo Teases A Huge Bailey Bombshell
By Abby Monteil
When Will 'Riverdale' Season 5 Return In 2021? Its Mid-Season Break Is Long AF
By Rachel Varina
The 'A Million Little Things' Season 3, Episode 10 Promo Is So Disturbing
By Abby Monteil
Stay up to date