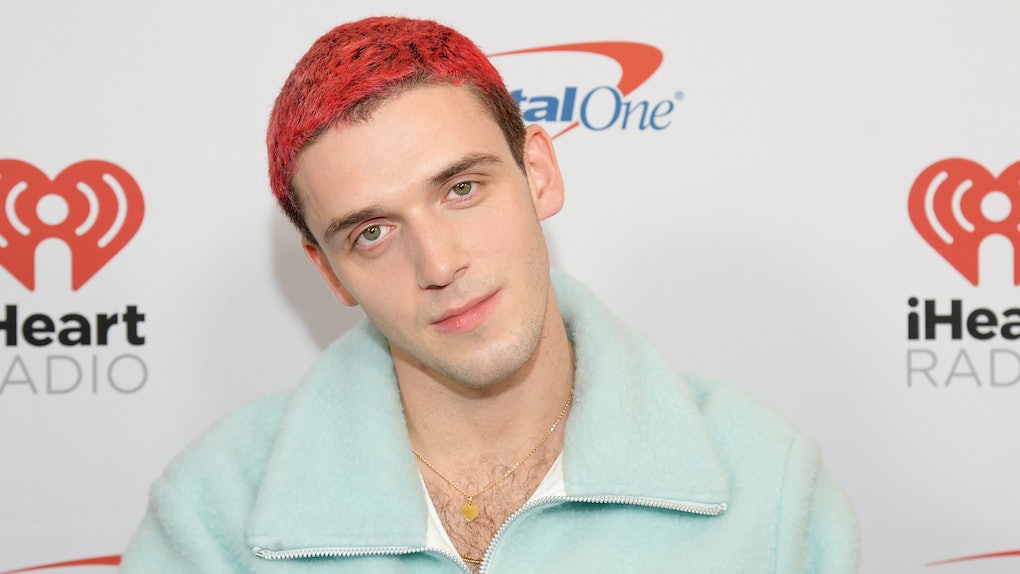 On New Year's Eve 2020, almost 11 million people tuned in to watch BTS perform on Dick Clark's New Year's Rockin' Eve, where they sang their single "Make It Right." The song originally dropped on the group's Map of the Soul: Persona album in April 2019, but the group re-released it in October 2019, this time featuring Lauv. The 25-year-old singer has collaborated with tons of artists besides the boy band — like Troye Sivan, Cheat Codes, and Demi Lovato — and each collab happened organically after the artists connected through their creative visions. Specifically, though, the reason Lauv collaborated with BTS says so much about the journey that led up to this exciting point in his career.

Lauv says that collab with Sivan came about without much effort. "Originally, [Troye and I] were just writing it and we didn't even have a plan for him to sing on it," Lauv explains, adding he asked Sivan if he wanted to sing on the track with him halfway through the songwriting process. "It kind of just happened that way. All my collabs have been super natural."

That tracks, since BTS and Lauv's "Make It Right" remix came about just as organically after Lauv attended BTS' London concert at Wembley Stadium in June 2019, and met them backstage.

"[As] I was leaving the backstage area, a woman from their team said the boys would love to have you on a remix of 'Make It Right,'" Lauv shares. "Two days later, I was in London and I just recorded it and sent it over."

Writing his "Make It Right" remix verse was an especially unique writing experience for Lauv because the song already had its own message. "[BTS] wanted me to interpret [the meaning] in my own way and not necessarily stick to the lyrics that already existed in Korean," Lauv reveals. "It was really fun for me because I've never done anything like that. I always write candidly and whatever happens happens, but this was kind of a situation where I was relating to what the song originally was and finding my own way into it."

But after releasing singles and collabs for several years, Lauv feels now is the right time to drop his debut album, ~how i'm feeling~, due out March 6.

"It just feels really good to have a body of work that I think really represents me fully and not just kind of like an aspect of who I am," Lauv says. "There's a lot of social pressure today to be a sort of singular person — that I'm a personal brand to be one thing — and I think that as people we're more complicated. Every single day I wake up and I feel like a different version of myself."

There are literally seven Lauvs on his How I'm Feeling album cover. Lauv explains that purple is the existential version of Lauv, blue is the hopeless romantic, green is goofy, yellow is positive, orange is the f*ckboy, and red is spicy.

It's been nearly three years since Lauv's sleeper hit, "I Like Me Better," dropped in May 2017, and he acknowledges his debut album has been a "long time coming." Turns out, it took him a while to build up his confidence and find his true voice. His "My Blue Thoughts" project in partnership with Microsoft aims to help fans do the same by encouraging them to share their thoughts and feelings with others around the world.

Fans can dive into Lauv's mind when his debut album, ~how i'm feeling~, arrives on March 6.