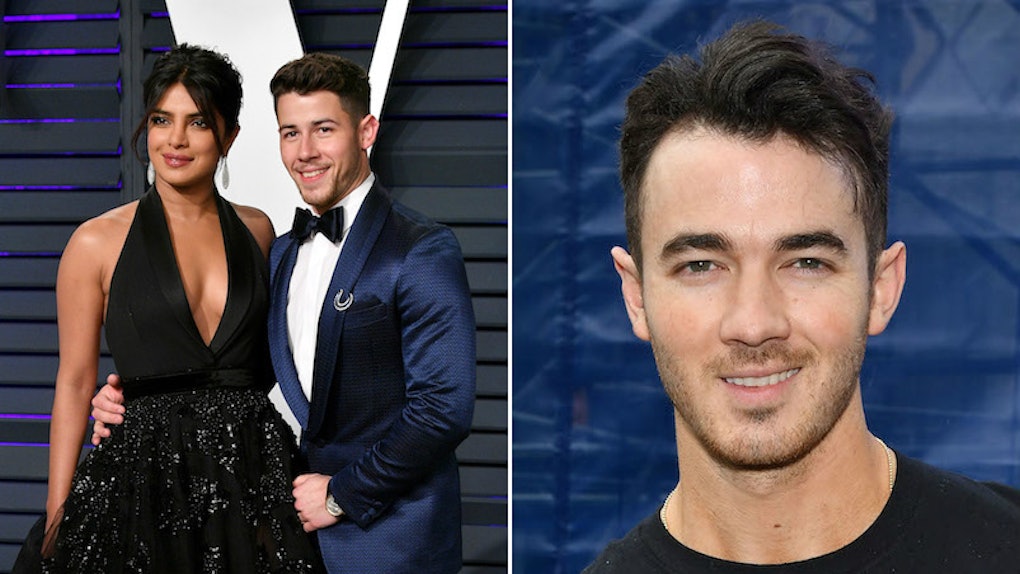 I don't know about you, but I feel as though the Jonas family has to be one of the coolest families in the world. Not only are the three brothers, Joe, Nick, and Kevin, incredibly talented in their own right, but each of their significant others is absurdly gifted — not to mention gorgeous — as well. But what if I told you that there was someone in the Jonas family that initially wasn't all too pleased to hear of Nick Jonas' marriage to actress Priyanka Chopra? While that might sound shady at first, there's actually an adorable reason Kevin Jonas' daughter didn't like Priyanka Chopra at first. Keep in mind, folks, that we're talking about a 2-year-old here!

Paying a visit to James Corden on The Late Late Show on Monday, March 4, the Jonas Brothers spoke to the talk show host about their band reunion announcement (yay!), but also chatted about how things have changed now that Nick is married to Priyanka Chopra. Specifically, they spoke about how Kevin Jonas' 2-year-old daughter, Valentina Angelina, was not pleased when her Uncle Nick brought Priyanka to meet the family.

"At first, it was a little rough going for my youngest daughter, Valentina. She’s very connected to Nick," Kevin revealed, to which the camera pans out to reveal Nick's smug expression.

And in case that expression is all you truly care about, let me present this screenshot to you:

"I mean, why not?" Nick replied, in a jokingly gloating way. Sorry, Kevin, you're clearly not up to snuff with Valentina. Don't take it too hard.

Kevin continued, explaining, "When she met Priyanka, Priyanka put her hand around his shoulder like this … and every time her hand would go around and [Nick] was holding Valentina, she would just push it off."

It's a cold, cold world, you guys.

"She’s very territorial," Kevin added. "She was just like, 'No.' It just became an ongoing joke. I’m not sure Priyanka loved it at first, but they’re cool [now]."

Phew! That's a relief, because I'm not too keen on the Jonas family being totally cool with the fact that there's a rivalry between a niece and an aunt.

"[Priyanka] was like, 'This is so funny …' " Nick mimicked in a way that made it seem as though Priyanka didn't actually find it funny, and, to be honest, I can't blame her.

You can watch the whole thing below (where you'll also hear the brothers joking about Nick and Kevin's weddings, as well as finding out that Nick Jonas does not like to be touched):

Full-on loving this clip and I'm not ashamed to admit it.

And you know what else I also love? Oh, you know, nothing much really other than the fact that the JONAS BROTHERS HAVE REUNITED and released new music!

In a tweet on Feb. 28 from their newly reactivated account, the Jonas Brothers confirmed the rumors that the gang is back together and that new music would drop at midnight on Friday, March 1. The song, entitled "Sucker," is literally the sweetest, upbeat ballad clearly dedicated to all of their leading ladies.

And if you think otherwise, then maybe you should watch the video, which stars Priyanka Chopra, Sophie Turner, and Danielle Jonas:

Dying. I officially have no pulse. Thanks, Jonas Brothers!