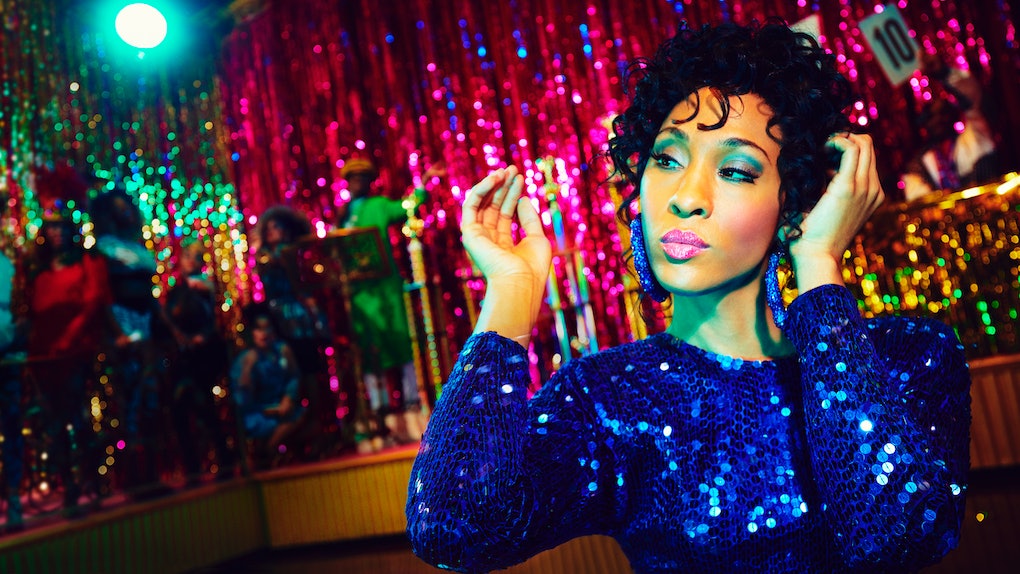 Ryan Murphy first put himself on the TV map with Glee, a network musical series. Since Glee was canceled, Murphy has been focused more on anthology series like American Horror Story, American Crime Story, and Feud. But with Pose, Murphy returns to the type of show that made him famous. Pose is billed as "a dance musical that explores the juxtaposition of several segments of life and society in New York." Befitting such a claim the Pose soundtrack for the premiere episode is an aural delight, with enough tracks to fill a double vinyl album. Warning: Spoilers for Pose's Season 1 premiere follow.

Unlike Glee, which featured singers, Pose is all about different segments of society who dance, plus a character who refers to music as "his hobby." That means at every turn, temporary dance and pop music of the era is blasting from radios on street corners or playing in the background, or booming at high decibels from the club speakers as the ballroom dancers parade for the judges.

Let's run down all 18 tracks that can be found in the premiere episode.

Released in 1981, this disco track is the opening song of the series and establishes the tone of the show.

"In My House" by Mary Jane Girls

Released in 1985, this MTV staple was produced by Rick James. It is the track that plays during the museum heist sequence.

A 1979 disco hit, this song is the one playing under the Royalty category in the first ball sequence.

"On The Radio" by Donna Summer

This track is from 1980 and is the song Damon runs home to after ballet class before jamming out in his room.

"Ain't Nobody" by Chaka Khan & Rufus

A track from 1983, this is the song playing when Elektra and Blanca have their showdown and Elektra refuses to give her blessing to Blanca starting her own house.

This 1986 jam is what's playing in the background in Central Park when Damon nearly gets robbed the first time.

"White Horse" by Laid Back

An early electronic track from 1983, this is the song Damon is dancing to in the park when Blanca spots him.

"Meeting In The Ladies Room" by Klymaxx

This 1984 funk track is the song playing when Damon walks into the ballroom for the first time.

This is old school disco from 1974, and the track for the category of Executive Realness.

This 1987 hip-hop jam is playing on the radio in between swapping to news when Stan pulls up to Angel's street corner.

The painfully cheesy 70s track that plays in Stan and Angel's hotel room sounds that way because it is. It was originally released in 1975.

"Running Up That Hill" by Kate Bush

This song? It's gonna be our song from now on. It was also the hit that put Kate Bush on the map in 1985 from her debut album Hounds of Love.

The other Eric B. & Rakim track from 1987 comes when Damon gets robbed of his backpack for real and has to go find Blanca and beg her for a place to stay.

The category is "High Fashion Evening Wear" and the track is a British New Wave song from 1982.

This 1985 R&B track is what's playing in the background at Pray Tell's place during Damon's fitting.

This Nu-Disco track from 1983 is the track blasting on the pier at night when Blanca takes Damon to hang out with Pray Tell and experience street dancing.

"Swept Away" by Diana Ross

This 1984 title track from Ross' solo album that year is what plays when the Houses of Abundance and Elektra throw down for the first time.

"I Wanna Dance With Somebody" by Whitney Houston

And finally, Whitney Houston's first single from her 1987 Whitney album. Does Damon's dancing do it justice? Seems like Ms. St. Rogers thought so.

More like this
These Iconic 'Grey's Anatomy' Songs Belong On Your Moodiest Playlist
By Abby Monteil
This Theory About The Songs In BTS' "Butter" Concept Videos Will Blow ARMYs' Minds
By Michele Mendez
What Is Coco Jones From 'Let It Shine' Up To In 2021? She's Doing It All
By Sydney N. Sweeney
Stay up to date