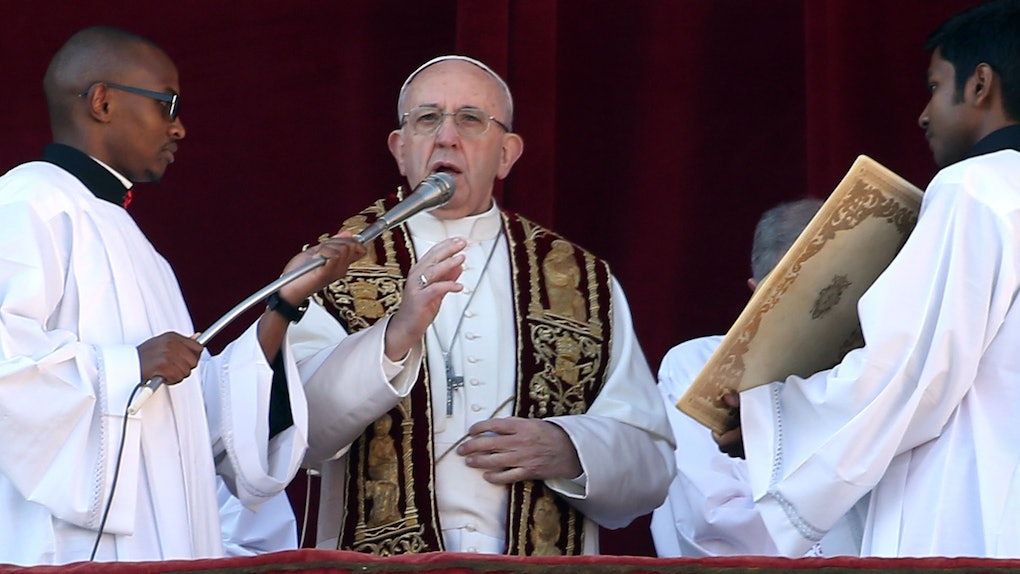 Yep, that's right. Not only did this couple get married in the sky while on a flight, but they also had the honor of being married by his holiness Pope Francis. The Associated Press reports that their marriage was the "first-ever airborne papal wedding."

Flight attendants, Paula Podest 39, and Carlos Ciuffardi, 41, are more than just co-workers on LATAM airlines; they're also lovers. The two were apparently working together on a flight from Santiago when the pope married them 36,000 feet above the ground, according to the Associated Press.

Technically speaking, the two had already been married legally eight years ago. The Associated Press reports they shared with the pope that, back in 2010, they had been married in a "civil service union." Although they intended on having a church ceremony, an earthquake struck their home country of Chile on Feb. 27, 2010, which resulted in a bell tower for the church falling, leaving them with no choice but to cancel.

They recounted the unfortunate circumstances to the pope when he was taking a group picture with the flight crew in the front of the plane. “We told him that we are husband and wife, that we have two daughters and that we would have loved to receive his blessing. All of a sudden he asked us if we were married in the church, too," Ciuffardi told the AP. The couple then told the pope about the earthquake, and he decided to do something so incredibly kind for them.

From there, Pope Francis literally proceeded to marry them. TALK ABOUT THE BEST WEDDING EVER.

A church official aboard the flight with them even hand wrote Ciuffardi and Podest an official marriage certificate to commemorate the beautiful moment:

Podest also shared a piece of advice the pope gave her with the reporters on the flight: “The wedding rings shouldn’t be too tight, because they’ll torture you, but if they’re too loose, they’ll fall off. So we have to be careful."

OK, FIRST, they get to have a historic wedding in the sky being married by THE POPE, and THEN, they get to receive priceless marriage advice from him?! Dreams really do come true, you guys.

Whether you practice Pope Francis' faith or not, let's all try to take his words into account. Also, let's make sure our rings fit properly, because apparently, that's important, too.

Congrats to the (sort of) newlyweds!