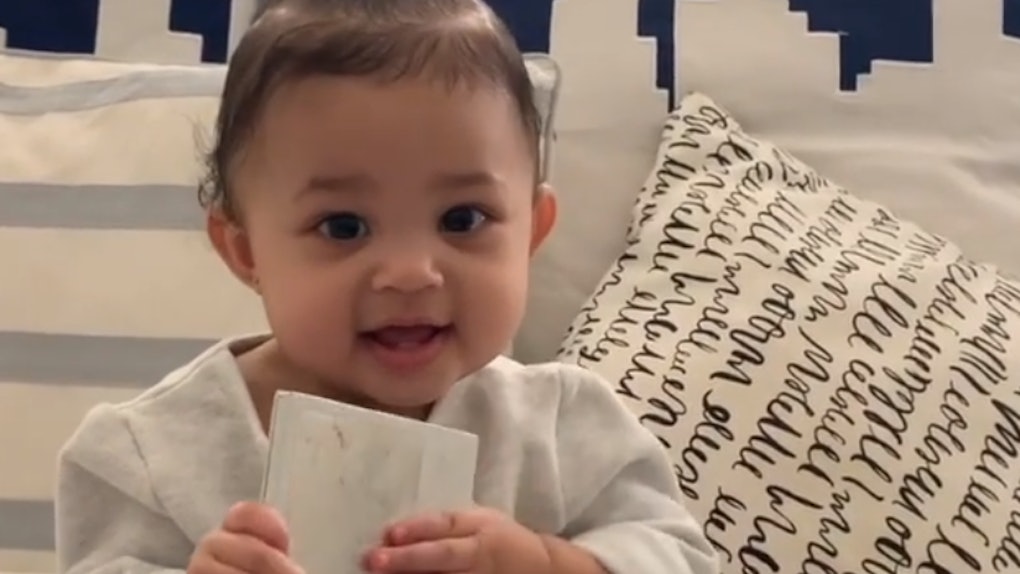 Kylie Jenner and her daughter Stormi have a lot in common! The mother-daughter pair apparently share a love for butterflies and Jenner was happy to show that off on Instagram recently. In a Jan. 30 Instagram Story, the 21-year-old reality star and makeup mogul can be heard cooing at her daughter as she plays with fake butterflies on the wall. Of course, little Stormi is all giggles about the whole thing and it’s genuinely adorable. The photos of Stormi playing with butterflies are literally the cutest photos you’ll see all week!

In Jenner's video, little Stormi is grabbing at decorative butterflies and giggling. She even snatches a few off the wall, but Jenner is very cool about it. “Oh, don’t break it,” Jenner whispers to her daughter. “Oh, girl, you’re dropping all of them. You’re breaking them!” Ultimately, Jenner laughs it off. But since Stormi is not even a year old yet, she doesn’t quite get the message. And that’s okay with Jenner, who seems happy that her daughter is happy!

In total, the video is quite short, but it definitely shows that little Stormi is growing up. She’ll be turning one on Feb. 1, so she’s starting to walk and express herself in new ways all the time, which Jenner seems really excited to document.

In any case, the video of Stormi and butterflies is too cute! Screenshots of the video are equally cute. Here's a look at a few screenshots from the video Jenner posted:

Jenner is actually pretty famous for her strange relationship with butterflies. Back in 2017, Jenner revealed on Life of Kylie that she's actually terrified of butterflies.

"Butterflies are just part of the secrets of Kylie," she explained. "It's kind of just ironic because I'm terrified, terrified of butterflies. All butterflies. This is how I think of them: cut the wings off and if you just look at their bodies, they're not that pretty. It's literally a bug."

But then, a year later, she dressed herself and Stormi up as butterflies for Halloween.

She and Travis Scott also have matching butterfly tattoos:

So, what’s the deal? Maybe Jenner has had a change of heart when it comes to butterflies. Or maybe Scott’s influence has given her reason to love them. He does have a song called “Butterfly Effect”, so perhaps butterflies have a special meaning to them. Here are some of the lyrics to the song:

She caught the waves just thumbin' through my braids / Heatin' up, baby, I'm just heatin' up / Need ya love, not a need it is a must / Feelin' stuck, you know how to keep me up / Icy love, icy like a hockey puck

Is it possible that “Butterfly Effect” is about Jenner? Maybe! In any case, it seems like Jenner has a lot of love for butterflies now even if she was terrified of them just a few years ago. And Stormi seems to really love them as well, so it’s a cute family thing, I guess!