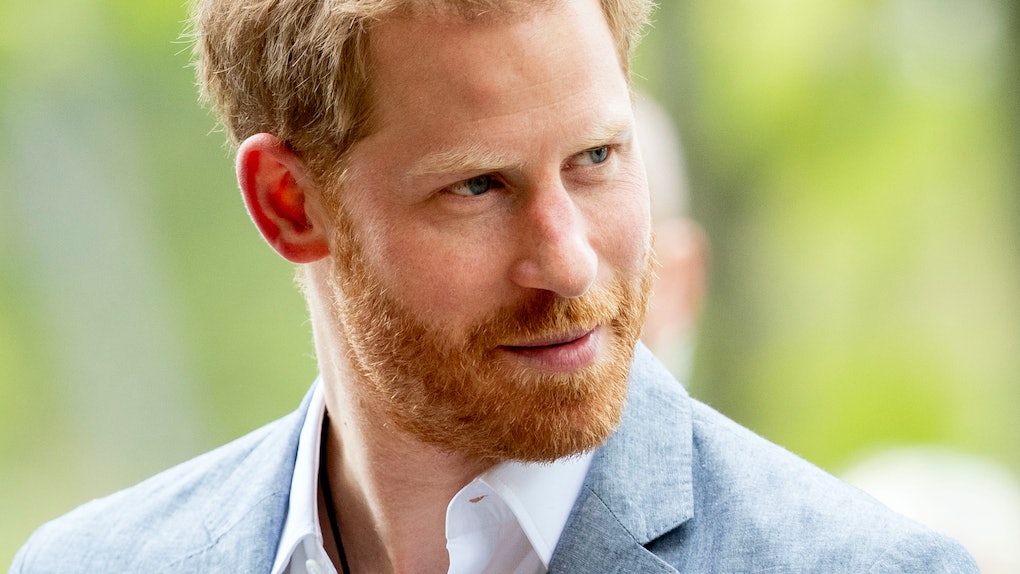 Prince Harry is fully leaning into his new role as a dad. The Duke of Sussex is back to his regularly scheduled programming of public appearances after having a few precious first days with Meghan Markle and their son, Archie. The couple debuted Archie Harrison Mountbatten-Windsor on Wednesday, May 8, revealing his name a few hours after the photocall, and now that little Archie has met his other royal family members, Harry is back to work. He had his first day back on May 9, checking in on Invictus Games, and the photos of Prince Harry's "daddy" jacket show just how fully leaned in Harry is to his new parenting role.

Harry traveled to The Hague, Netherlands to mark the one-year mark until the next Invictus Games, which he founded. He went to the Sportcampus Zuiderpark to meet the hopeful competitors, kick off some Invictus events, and celebrate the impending arrival of the next games. During a cycling event, Harry showed up wearing an Invictus Games jacket, but with a twist.

His new jacket had the Invictus Games logo on it (with the words "I AM" highlighted in the logo), but underneath this logo was the word "Daddy" written in all caps.

Just to make sure we're clear here, Harry wore a jacket that says "I AM DADDY" in all caps today.

I... have no words for this. I think we just have to move on to the other item of clothing Harry had today.

At another point during the appearance, Harry was gifted with a onesie for little Archie to wear.

Look at that proud dad!

The onesie also had the Invictus Games logo on it, which no doubt was a sweet moment for Harry, given how close to his heart the Invictus Games are. Also, you can tell just by the looks on his face in those photos that his heart is melting at the sight of this onesie. Harry is in full dad mode, people!

Buckingham Palace announced on the afternoon of Monday, May 6, that Meghan Markle had given birth to her and Harry's son.

Finally, it capped off with a note about Meghan's mother, Doria Ragland.

"The Duchess’s mother, Doria Ragland, who is overjoyed by the arrival of her first grandchild, is with Their Royal Highnesses at Frogmore Cottage," it said. "Her Royal Highness and the baby are both doing well."

Two days later on May 8, Meghan and Harry debuted their son to the world.

Look at these proud parents!

Can't wait to see pictures of little Archie in his Invictus Games onesie.