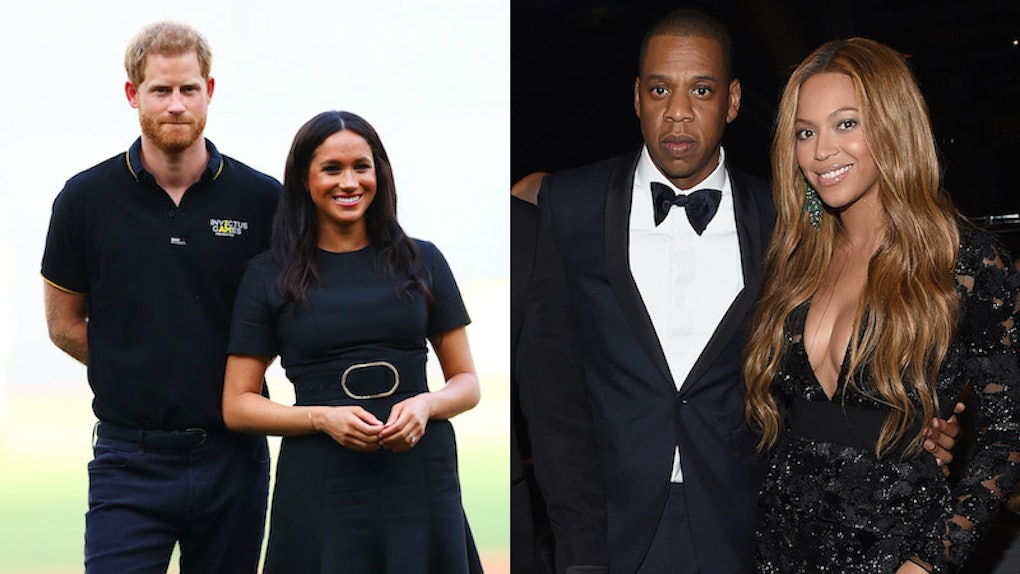 The Photos Of Meghan, Harry, Beyonce, & JAY-Z At 'The Lion King' Premiere Are #SquadGoals

Meghan Markle and Prince Harry may be new parents to 2-month-old baby Archie, but that didn't stop them from going to the UK premiere of Disney's The Lion King in London, England. Not only did Meghan and Harry get out of the house for the premiere, but they hung out on the red carpet with some pretty big stars. The photos of Meghan, Harry, Beyoncé, and JAY-Z at The Lion King premiere are total #SquadGoals

The Duchess of Sussex, who was joined by husband Prince Harry on Disney's The Lion King red carpet, stunned in an all-black Jason Wu dress with sheer black sleeves while her husband wore a matching all-black suit. According to People, this premiere marked Meghan's first-ever film premiere as a royal. Before the premiere of the film, Meghan and Harry shared some hugs and conversation with fellow royals, well, music royalty, that is. Meghan and Harry mingled with Beyoncé, who voices Nala in the live-action film, and her hubby JAY-Z. Beyoncé was wearing a custom gold pleated gown by Cong Tri while JAY-Z, like Harry, wore a black suit, per People.

The photos of these four meeting are seriously incredible and have left me totally starstruck. In one of the photos, Harry and JAY-Z can be seen shaking hands ahead of the event. In another photo, Beyoncé and Meghan are pictured hugging in a sweet moment. TBH, I really wish I could have scored an invite to hang with this squad.

Meghan has had quite a busy couple of months. On May 6, Meghan gave birth to her and Harry's first child, Archie Harrison Mountbatten-Windsor, a pretty non-traditional name for a royal baby. During the premiere of The Lion King, it's reported that Beyoncé told Meghan it was nice to meet her and also told her "that baby is so beautiful," according to a fan video posted on Instagram. OK, a Beyoncé and Meghan friendship is something I never knew I needed, but I hope these photos are just the beginning.

Meghan's hangout sesh with Queen Bey and JAY-Z definitely isn't her only celeb encounter news to circulate in recent weeks. On Saturday, July 13, the Duchess of Sussex attended the women's singles final with her sister-in-law Kate Middleton to see her close friend Serena Williams play Romania's Simona Halep at Wimbledon. At the post-match press conference, per People, Williams told reporters that Markle is "such a great friend and a great person as well. And always positive, no matter what.”

Meghan and Harry also had another surprising celeb encounter that was revealed recently, even though it happened all the way back on their wedding day in May 2018. In a recent interview with BBC Radio 1Xtra, actor, director, and musician Idris Elba revealed that he actually DJ'ed Meghan and Harry's private wedding reception. He revealed some more details about his gig, saying, "Meghan sent me a playlist with some bare tunes on it." He also alluded to Meghan's California roots, saying, "There was some West Coast on it." I don't know about you, but I love the idea of the Duchess of Sussex absolutely jamming out to some West Coast tunes spun by DJ Elba.

It truly seems like Meghan and Harry are living their best lives at the moment. Of course, I'm sure Archie is their top priority, but I'd like to think they were also pretty pumped to meet Queen Bey IRL.

More like this
'Spider-Man 3': Cast, Trailer, Premiere Date, Title, Filming News, & More
By Ani Bundel
Who Will Play The Fantastic Four For Marvel? Twitter Has So Many Ideas
By Dylan Kickham
Royal "Experts" Said Meghan Markle's 'The Bench' Sends Coded Messages To The Firm
By Brandy Robidoux
Stay up to date